Recently, while travelling, I stopped for coffee and overheard a conversation that restored my faith in humanity. It was an interaction that fired my memory about the old days when I worked in the music business. It involved an unknown, new group, who were sacking a band member. In the tumultuous birth of emerging artists, this is nothing unusual, but what struck me here was the reason for his dismissal. He was being chucked out for sexual harassment.

I heard a few young men tactfully, eloquently but firmly reject their now former bandmate’s increasingly desperate appeal for clemency. Never insulting him, recognising how difficult he would find their actions, they united to rebut his plaintive denials and excuses. No, they insisted, this was not a one-off misunderstanding or “misreading of signals”, as numerous other women had shared identical complaints. They knew he hadn’t “intended” to sexually harass anyone, but that was what he had crassly done, intentionally or not.

I did time during the Madchester years as an A&R scout and wrote about music for, among others, the NME. I witnessed so much appalling behaviour by male musicians, writers and other music biz types that I often felt as if I had wandered into the gents by mistake. Male writers were convinced that no woman was suitable; indeed, one especially high-handed, pompous individual mansplained feminism to me, after I called him out on a lamentable credit for a piece of writing in which I was listed, despite a growing career, by my occasional work as a babysitter (the men had their extensive achievements covered, in full.) There were darker rumours.

But that day, over coffee, I disappeared into a grim, elegiac reverie: recalling stories, such as the female journalist, alone on a rooftop with an (of course) all-male band. When she declined sugar in her coffee, they suggested this indicated she did not like oral sex. Or the teenage writer, compelled to endure drunken, blokeish braggadocio, before being packed off to a hotel room to interview the now drunken band, afraid to share how vulnerable she felt. Or the musician who groped (that is, sexually assaulted) a female writer, who to her credit punched him, to widespread hilarity. Or the band who spiked women’s drinks with ecstasy, and revelled in their disinhibited humiliation. 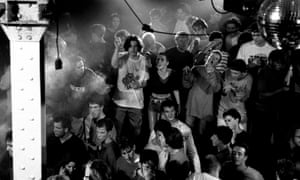 Complain? A few good men interceded and demanded an apology when a creepy head of a now-defunct label spent time patronising me before an interview. But mostly, when I angrily called out abuse, harassment, even assaults, it was declared that I must be a lesbian. In their warped world, this was an appropriate “insult” to hurl at a confident, assertive woman.

I wonder what will become of this as-yet-unknown band of brightly articulate, empathetic young men. These have been revelatory and troubling times: #MeToo and allegations against Harvey Weinstein. But what I overheard was a wonderful example of how far we’ve moved on: having experienced a music industry hugely attractive to knuckle-dragging misogynistic troglodyte oafs, who behaved with impunity, at least in one small corner of the music industry, things have clearly changed for the better.

There are now more women in bands, and in varied music business roles such as label heads and management: consequently, male musicians are increasingly aware that sexual harassment amounts to criminal behaviour. I remembered how Hookworms split up, recognising that sexual harassment is both appalling and toxic.

For a fleeting moment, I convinced myself that while gender equality in the music world is far from fully achieved, we’ve come a long way. Social media can be used to broadcast previously hidden shortcomings, and bands are aware that what might previously have been described as “wandering hands” is nowadays rightly decried via the megaphone that is a Twitter hashtag. Because once upon a time, the guilty man would, after much appreciative joshing, have been allocated the best bunk on the bus: reward for his top banter. There’s still far to go, and we need more women to be treated entirely as equals, not as anomalous decoration; for more men to call out abuse, as these men did.

I considered suggesting they checked up on their errant but now vulnerable and isolated ex-colleague, or reassuring them they had done the right thing. But I left to go on my way as they reset the social media passwords: for their now ex-bandmate, the modern equivalent of bolting the door behind him.

• Penny Anderson is a writer and artist. She blogs at thebunnytrickster.blogspot.co.uk