Turkey in space! The most extraordinary Christmas dinners are revealed in a new show

Pulling out all the stops for Christmas might mean buying new table linen, reserving a top-of-the-range turkey or splashing out on fizz.

The World’s Most Extraordinary Christmas Dinners, a one-off documentary on Channel 4, looks at people who go a lot further – £150,000 crackers, a 25ft tree or the world’s most expensive pudding.

‘It’s interesting the lengths people go to,’ says producer Stacey Burns. ‘They are all extraordinary.’ 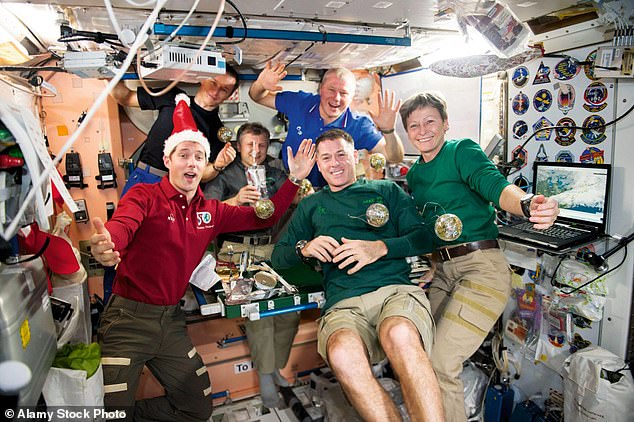 Channel 4 explores how people around the world prepare for the festive season in new documentary The World’s Most Extraordinary Christmas Dinners  (pictured: Astronauts celebrating on the ISS expedition)

Designed to look like a mythical beast, it is half pig-half turkey, stuffed and sewn together.

NASA astronaut Anne McClain will be on top of the world on the big day – eating her meal on the International Space Station.

But her turkey with cranberry sauce, like all her meals, will come in packets that need to be hydrated.

Anne doesn’t have the oddest food on the show.

That accolade goes to chicken breeder Jonjo, who eats one of his exotic birds at an early Christmas dinner with his family.

The rare Ayam Cemani chicken – the ‘Lamborghini of poultry’ – is black, right down to its bones, and sells live for about £60.

But how does it compare to the regular Sunday roast? ‘It just tastes like chicken,’ says Jonjo.

Chef Marc Guibert is the creator of the world’s most expensive dessert, costing an estimated £26,000.

He makes the chocolate dish, laced with edible gold and with a diamond ring inside, for a family in Surrey. 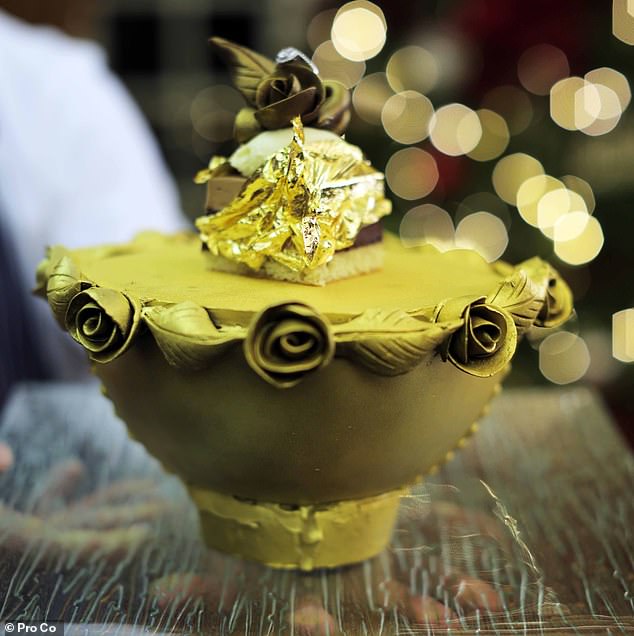 Chef Marc Guibert is the creator of the world’s most expensive dessert (pictured) which has a value of up to £26,000

But the most special dinner is aboard a nuclear submarine, where chefs make mince pies to freeze weeks ahead because they never know where in the world they will be – only six out of a crew of 150 know – or when they’ll see land again.

Decorations are important too, and we will see florist to the stars Kally Ellis turn the Rosewood London hotel into a winter wonderland, using a crane to manoeuvre a 25ft tree.

Then there’s jeweller Mark Hussey who, having made a diamond-encrusted bauble worth £82,000, crafts a set of crackers costing £150,000.

Each is in a ruby-encrusted silver sleeve.

‘But we also wanted tradition, so they have the plastic gifts and bad jokes that Christmas needs too.’