Sabrina became more acquainted with her witchy side during Chilling Adventures of Sabrina Season 1, but during the holiday season, she’ll be inspired to investigate the human part of her family tree. That’s right: What happened to Sabrina’s mom on Chilling Adventures may be revealed in A Midwinter’s Tale when it premieres on Dec. 14. Because it has to be more than a plane crash, right?

During an interview with Entertainment Weekly, series creator Roberto Aguirre-Sacasa explained how the holiday special will continue some of the storylines present in Season 1 — including what happened to Diana. "We pick up a couple of threads about Sabrina and her mom, who’s trapped in limbo, so there’s definitely tendrils of narrative that we continued," he told the outlet. "The other thing is, Christmastime is traditionally a big time for ghost stories and ghost visitations, A Christmas Carol being the best example of that. So Sabrina gets it into her head that she’s going to have a séance to contact her mother." 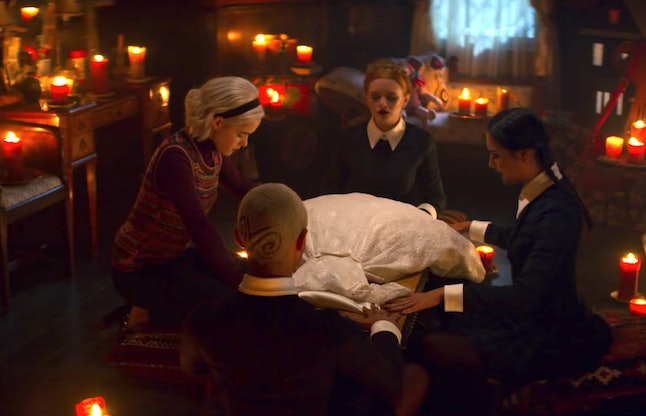 In the trailer for A Midwinter’s Tale, you can spot Sabrina conducting that séance with the witchy Weird Sisters. For the ritual, Sabrina uses her mom’s wedding dress that she wore for her Dark Baptism. Aguirre-Sacasa told Vanity Fair that the episode was inspired by the séance scene in Beetlejuice when Geena Davis and Alec Baldwin’s ghost characters are summoned to the land of the living via their wedding clothes. "Beetlejuice does it brilliantly. We do it OK," he quipped.

Although Diana is nowhere to be found in the trailer, it sure seems like she’ll appear to her daughter in A Midwinter’s Tale — and so Sabrina may get some answers about the past. As Season 1 showed, Sabrina’s father Edward, who was the High Priest of the Church of Night, was almost excommunicated for choosing to marry a mortal. And his choice of Diana is certainly something Ms. Wardwell (aka Madam Satan in disguise) is none too happy about. That, plus the warnings Diana gave her daughter, makes it seem that the story that Diana and Edward died in a plane crash is far from the truth. 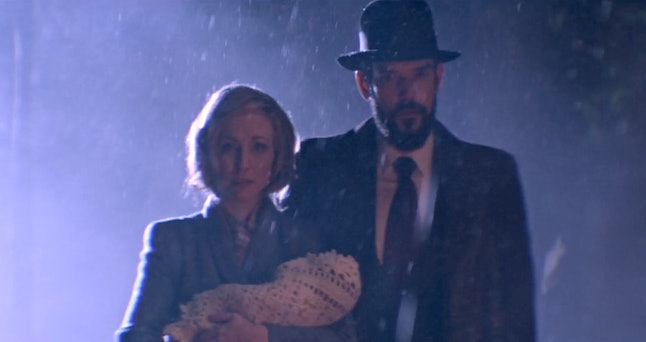 Sabrina learned in Season 1 that her mother had her baptized through the Catholic church unbeknownst to the Church of Night. Then, when Sabrina went to limbo in Chapter 9 to try to save Harvey’s brother Tommy, she discovered her mom was there. Before this dangerous endeavor, Ms. Wardwell (who is really Madam Satan in disguise) told Sabrina, "Limbo, mortal or witch, is a realm at the edge of death. The souls trapped there are lost in ways we can’t understand. Hunted by a monstrosity, a soul-eater, that devours those it catches."

When Sabrina encountered her mom, Diana was confused about how her daughter could be in limbo since she had her baptized. "They took my baby after the baptism," a disoriented Diana said. Then, when Sabrina asked who had taken her, Diana said, "The witches are coming." Because the Church of Night thoroughly disapproved of their leader marrying a mortal, it wouldn’t be surprising if they engineered Diana’s death in an effort to keep Sabrina away from her human mother. And the trailer for A Midwinter’s Tale seems to hint that Edward could have been in on it, too, since one shot appears to show him presenting baby Sabrina to the Dark Lord. Yes, Sabrina already knows that Edward signed her name in the Book of the Beast when she was just a baby, but perhaps his deception goes deeper than that. 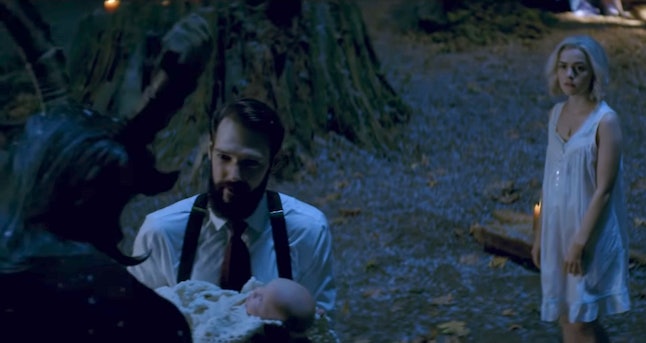 In the Chilling Adventures comics (spoilers ahead), the fates of Sabrina’s parents are different than what has been presented on the show, but the family still has dark secrets. Diana is actually alive and living in a psychiatric institute after Edward cast a spell on her. So there’s a very good chance that Edward betrayed Diana on the TV show as well.

While holiday specials are known for giving people warm and fuzzy family reunions, it’s clear you shouldn’t expect that from Chilling Adventures of Sabrina: A Midwinter’s Tale. But at least Sabrina will get the gift of the truth this Christmas and winter solstice season.