MEN are notoriously bad at talking about they feel – both mentally and physically.

In fact, according to the Agency for Healthcare Research and Quality, blokes are up to 25 per cent less likely to visit a GP than women. 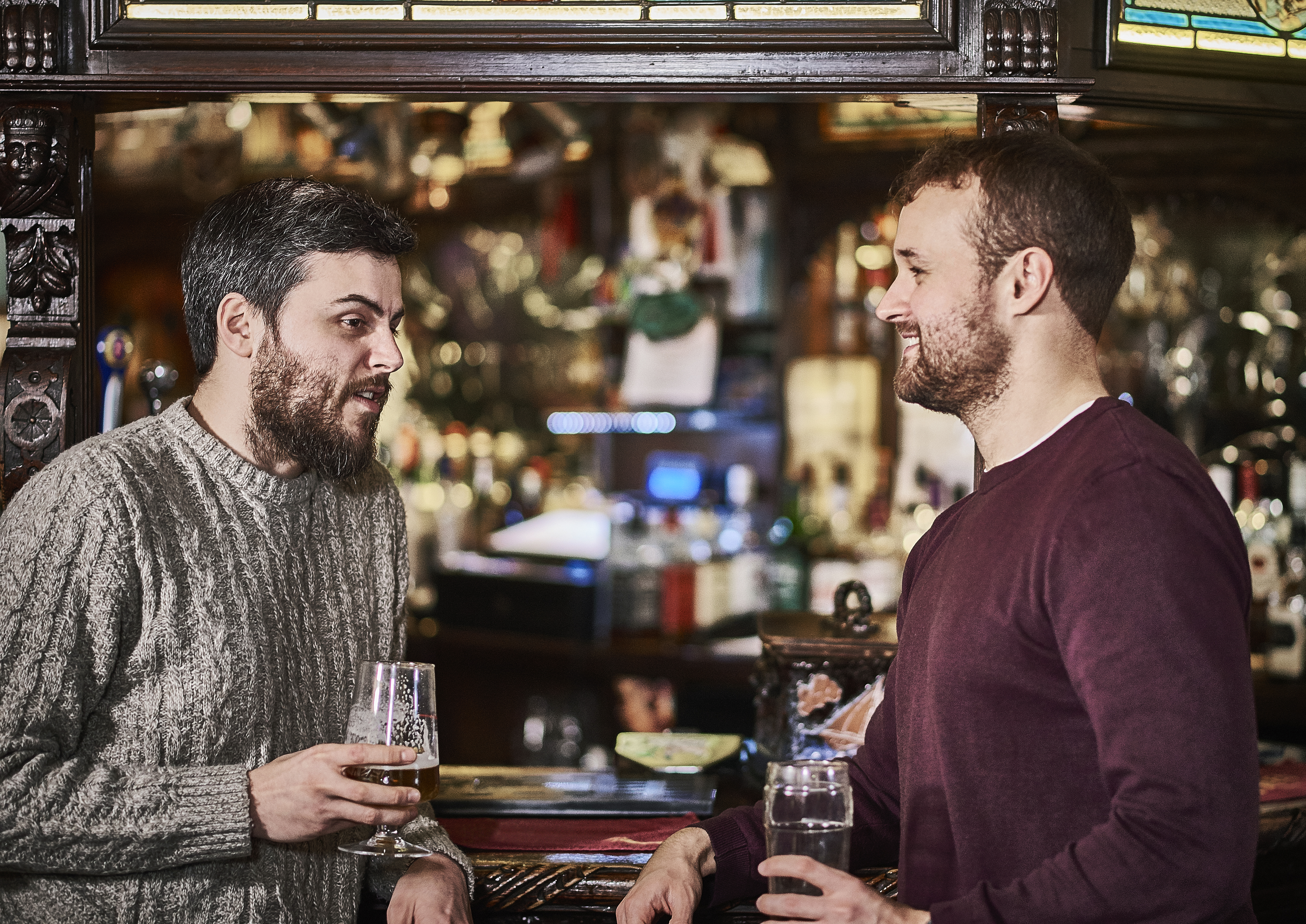 Many men shy away from open and frank chats, when it comes to their health – be it down to fear or embarrassment.

Here, we ask the experts, the important questions that all men should throw into conversation with their nearest and dearest… starting the conversation might just save a life.

It's not just middle-aged blokes either, it's young ones too.

And it's not just due to physical disease. Suicide is a top killer for young men in Britain today.

Don't settle for a "fine" if it's obvious that the man in your life isn't fine.

Maybe share a frustration of your own to make him feel a little less put on the spot.

If that doesn't work, you could use the Men's Health Forum's tactics.

Warning signs to look out for

One in four of us will have a mental health problem at some time or another.

The key is intervening before the issue becomes too huge.

Although male suicide rates are at their lowest since 1981, it's still the single biggest killer of men under the age of 45.

And compared to women, men are three or four times more likely to kill themselves than women.

So it's imperative you can spot the warning signs of poor mental health when they first crop up.

Men's Health Forum warns to watch out for extreme behaviour.

That can include mood swings or being unusually angry or aggressive, having no energy or way too much energy, wanting to be alone a lot or wanting to go out all the time.

Drinking way more than usual or using drugs can also be key signs.

2. Do you need to pee more than usual?

Daniel's dad Ken first knew there was something wrong down below when he started to find that really needed to pee.

"One of the most important questions to ask is whether your dad's having waterworks problems," says Dr Sarah Jarvis, GP and clinical director of patient.info.

"Some men have an increased risk of prostate cancer – this can be genetic.

So if your dad, brother or boyfriend keep getting up in the night or feel like they're often dashing to the loo, that could be a sign of prostate cancer.

"The second most common problem is erectile dysfunction or ED," Dr Jarvis said.

"It may be the last male taboo but it affects up to two in five men over the age of 40.

"Importantly, it’s often an indication of an underlying physical problem such as type 2 diabetes or being at high risk of heart disease."

And being unable to maintain an erection can also be a sign of prostate cancer.

While it might be an awkward one to bring up with your dad, it's really worth mentioning – especially to your mates.

If your boyfriend or husband has been having issues in the bedroom recently, again, you might want to address that.

A Prostate Specific Antigen (PSA) is a blood test which will tell you about any changes with your prostate.

If your dad has had a PSA reading of four, it can mean the start of an enlarged prostate or worse.

And if he or any of his direct relatives have had prostate cancer, your risk is increased by 2.6 times.

"We're not saying every man needs to actually have a PSA test, but every man should have that conversation with their doctor," Sarah Caghlan, global director of health promotions for the Movember Foundation told The Sun.

The PSA test isn't 100 per cent accurate, and results could indicate an inflamed prostate rather than a cancerous one, but it is the most common way to spot the disease.

5. Has your dad ever had testicular cancer?

Testicular cancer, if caught early on, is easily treatable.

And one way of being sure to catch it early is to know how susceptible you are to the disease.

If a close blood relative has had testicular cancer, you're up to eight times more likely to develop it.

Movember's Sarah told The Sun: "If you've got a direct genetic link with someone who has had testicular cancer, so your dad or brother, then you have an eight times greater risk of developing the disease."

It's worth asking your dad about his granddad and uncles too – though the genetic risk does lessen the more distant the relative, she added.

So, why is it important to have this chat sooner rather than later?
While most cancers strike when you get older, testicular cancer is different.

"It's a highly treatable disease, with great success rates so it doesn't have to be a scary one.

"But knowing about it is so important. If you take action early, it really doesn't have to be a scary disease."

Our poo can tell us loads about our health.

In other countries, there's no stigma around talking about poo but for some reason in the UK, we're all too shy to seriously discuss our toilet habits.

But a change in the way we poo can be a sign of something sinister.

Being constipated can be a sign of IBS, diabetes, thyroid issues or Parkinson's.

Pooing a lot more than usual or having blood in your poo could be a sign of Crohn's disease or colitis.

And, of course, the most common symptom of bowel cancer is a change of bowel habits.

So that could mean increasing constipation, or maybe alternating between bouts of constipation and diarrhoea.

Serious stomach pain, losing weight without trying and having blood in your poo are also red flags that need to be checked out.

7. Do you have high blood pressure or cholesterol?

The biggest killer of Brits is coronary heart disease.

If you've got high cholesterol in your family, you're 50 per cent more likely to have it too.

You can do things to bring it down, from adopting a low-fat diet to exercising regularly.

Again, it can be hereditary and it can increase your risk of heart disease or stroke by up to three times.

8. How are you sleeping?

Does your mate or dad look like he's more tired than usual – despite him not partying till dawn anymore?

Is your partner snoring his head off all night, keeping you awake?

Well, he could have sleep apnoea – a common sleeping disorder which can cause you to stop breathing.

There are multiple different kinds of sleep apnoea, but the most common one is called obstructive sleep apnoea.

This is when throat muscles intermittently relax and block the airways when you're asleep.

Often you've got to sleep wearing a mask to keep your airwaves open, but sometimes surgery is necessary.

Often, it can make you more tired because you're not getting that rested night's sleep but the worst case scenario is that it's possible to suffocate in your sleep.

9. Are you still working out?

This question isn't necessarily about shaming men into the gym.

But, it won't hurt to gently ask how much physical activity they're getting – and encourage them to be more active.

It can be as simple as taking the stairs instead of the lift or walking the dog every day.

Every bit of physical activity you can add into your day will help.

"As we get older we slow down," Sarah said.

"But, physical activity is so important for the mind as well as the body, it bridges both."

Plus, by raising the issue of your dad's exercise levels you will naturally raise awareness and help with other health issues, including heart disease and other cancers.

Lads young and old can be partial to good drink but it's worth keeping a note of just how much guys are drinking.

Are they a social boozer? A binge drinker? Or do they genuinely have an issue with alcohol?

If they are drinking a lot, it might be a sign of poor mental health – and it can have serious physical health ramifications.

Julie Breslin, head of the Drink Wise Age Well programme, run by drug and alcohol charity Addaction, said it's vital people know their limits, and can recognise the warning signs.

When you begin to see your units total creeping above the 14 threshold, it's time to take stock, Julie told The Sun Online.

"People [who have a problem] find they are regularly exceeding those unit guidelines and finding it increasingly hard to have a day off from alcohol," she said.

"If people find themselves getting into a continued habit of drinking daily or over the recommended guidelines, their tolerance can change and in the worst case scenario they can develop alcohol dependency."

What is alcohol misuse?

ALCOHOL misuse is when a person drinks to excess regularly.

That means drinking more than 14 units a week – the level recommended by the NHS.

That's the amount of booze the average adult liver can process in one hour.

A strong pint of beer contains three units, while a lower strength lager is just over two units.

The weekly recommendation of no more than 14 units, equates to six pints or 10 small glasses of wine.

That's 1.5 units in a small glass of wine, just over two in a medium glass and three in a large glass.

A single measure of vodka, gin and other spirits is one unit, while a double shot is 1.4 units.

11. When was the last time that you saw a doctor?

It's a fact that men are less likely to care for themselves.

Men can expect to die approximately five years sooner than women, and 25 per cent less likely to go to doctors.

In one study researchers found that men who believe men should be tough, self-reliant and brave prefer male doctors.

That's partly because they believe male doctors are more competent than female doctors.

But that's also stopping them from seeking out help in the first place – and there's no point in recognising the symptoms of disease if you're not going to do anything about them.

So make sure that your dad, friend, husband are going to get symptoms checked out soon as soon as they arise.

It's time to close the gender care gap – but that's only going to happen if we support the men in our lives.