Tesco is mocked over a snap showing stacks of Christmas chocolate on display at a till – so can YOU spot the supermarket’s mistake?

Tesco has been mocked after a shopper spotted a large display of Christmas chocolates – right next to a sign for ‘sweet-free checkouts’.

Tubs of Quality Street, Celebrations and Heroes were seen stacked several feet high in what is supposed to be a treat free zone.

The image was shared on Reddit by user ‘grishnackh’, alongside the caption: ‘good work Tesco’. 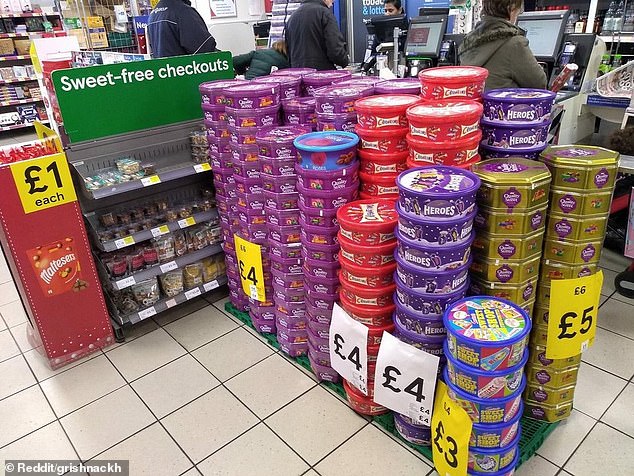 Tubs of Quality Street, Celebrations and Heroes were seen stacked several feet high in what is supposed to be a treat free zone. The snap was shared on Reddit by a British user

The person posted the image on Reddit mocking the display set up with a sarcastic comment ‘good work, Tesco’ pointing out the awkward gaffe

The photo, taken in an unknown location, prompted a flurry of responses from fellow users.

One person suggested the festive period had caused the mix-up: ‘It’s Christmas all rules go out the window when it comes to food.’

In 2015 Tesco announced it had removed ‘all sweets and chocolates in all supermarkets’ across the UK.

The photo, taken in an unknown location, prompted a flurry of responses from fellow users. Those outside the UK were confused by the idea of ‘sweet-free checkouts’

The move was designed to ‘help customers lead healthier lives’ and to reduce ‘pester power’, where children nag their parents for sugary sweets as they prepare to pay.

Sweets and chocolates were reportedly replaced by a variety of healthier snacks including dried fruit, nuts and cereal bars.

However the Reddit snap appeared to show different rules apply for the festive season.

The idea of the sweet-free checkout left some Reddit users living outside the UK baffled.

Others began to debate the reason why sweets had been removed from the checkout aisle: ‘It’s meant to be to deter children nagging their parents when they are at the checkout.