For the first time, Victoria’s native logging emissions have been calculated and made public. These findings, commissioned by the Victorian Forest Alliance, will increase pressure on the state Labor government to bring forward the industry’s planned 2030 closure. 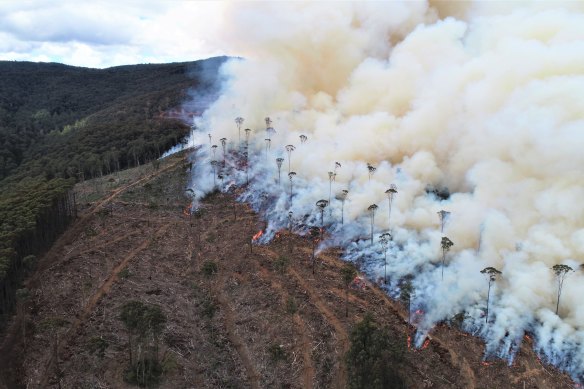 Carbon emissions produced from logging have long been unclear because they are not separated in official figures from the carbon dioxide absorbed by forests and forestry plantations.

Australian National University ecologist Professor David Lindenmayer has seen the report and agrees with its findings. Protecting and restoring native forests is essential climate change action if Australia is to meet its net-zero emissions targets, he said.

“Only native forests can remove carbon from the atmosphere at the scale and time required.” 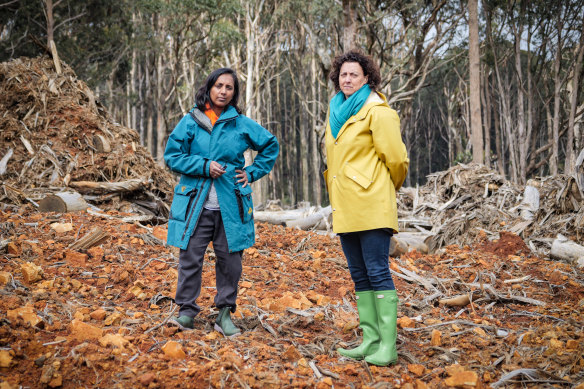 The average annual emissions over the past five years in Victoria were 3.35 million tonnes of carbon per year, the report found.

Most of the wood removed from Victoria’s forests goes into single-use products, such as paper, which have a short lifespan and therefore decompose and release carbon quickly, said report author Dr Jen Sanger, a forest ecologist and co-founder of environmental program The Tree Projects.

The report found that up to 14 million tonnes of carbon emissions could be prevented if the logging of native forests were to end immediately instead of in 2030.

Premier Daniel Andrews recently announced a Labor government in Victoria would fast-track its emissions reduction target by up to 80 per cent of 2005 levels by 2035, and reach net-zero by 2045. 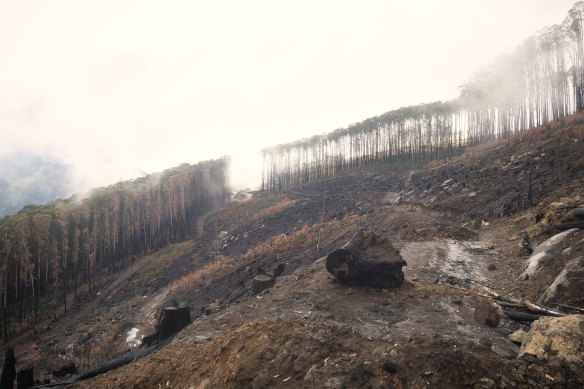 A logging coupe at Rubicon, in the central highlands of Victoria. Credit:Karena Goldfinch/supplied

“Given our commitment as a federal government towards stopping all extinctions, it does not square to continue logging … any native forest, anywhere in this country,” said Ananda-Rajah.

“I also want to understand the perspectives of forestry workers who have lived in these areas for decades and made a livelihood out of it,” she continued. “But overall, given the pressing circumstances of the climate crisis, I can’t see how continuing an industry like this is viable.”

Ryan said independents had an important role in moderating the activities of both the federal and the state governments. “Unfortunately, what we have is a Victorian state government propping up an industry which is time limited anyway,” she said.

Forest trees and other plants absorb carbon dioxide from the atmosphere. When they are cleared, burned or decompose, stored carbon is released into the atmosphere.

The new emissions figures were reached by calculating the amount of wood removed from native forests, using methods aligned with the 2006 guidelines for national greenhouse inventories.

Native forest logging is listed as a threat to greater gliders and koalas, which were recently added to the endangered species list. Federal Environment Minister Tanya Plibersek has pledged there will be “zero new extinctions” as part of threatened species policy, but not detailed measures to reduce or end native logging.

Under regional forest agreements made between state and federal governments, the state has to “balance” the impact of logging on flora and fauna with economic factors. In return, commercial logging operations are exempt from national laws – currently under review – that protect threatened species.

VicForests recorded a $4.7 million loss in the past financial year, which it attributed to bushfire disturbance and an unprecedented number of court challenges from community environment groups. It was given a government grant of $18 million, without which it would have lost almost $23 million.

Polling by The Age as part of its election Agenda series has consistently shown environment and climate change among the top issues readers would like to see given prominence in the election campaign.

The Age approached VicForests for a response but was told inquiries around policy should be sought from the government. A spokesperson for the state government said Victoria was a global leader in climate action, with some of the world’s most ambitious emissions targets.

“Our native forests and biodiversity are precious and should be protected, which is why the government in 2019 announced the phaseout of all native forest logging, including an immediate end to old-growth logging, and the protection of more than 250,000 hectares of forests as part of the Victorian Forestry Plan,” they said.

Plibersek said the management of Victoria’s forests was largely a matter for the Victorian government and VicForests.

Get to the heart of what’s happening with climate change and the environment. Our fortnightly Environment newsletter brings you the news, the issues and the solutions. Sign up here.