The Victorian government insists it told NSW of its plans to close the border as soon as receiving health advice after Premier Gladys Berejiklian said it acted too quickly and without consultation.

As Sydney's northern beaches emerged from its lockdown – the COVID-19 outbreak which prompted Victoria's border closure on January 1 – Ms Berejiklian urged other state premiers to not make hasty decisions. 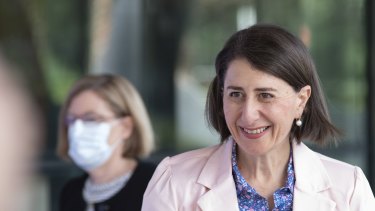 Premier Gladys Berejiklian has pleaded with the other states to consult NSW before closing borders.Credit:SMH

In a veiled swipe at Victorian Premier Daniel Andrews, Ms Berejiklian said states needed to "talk to us in NSW before you close the border because we can explain to you the situation that's going on".

Her comments come as Victorians stranded in NSW hope to learn in the next day or two when they will be allowed to return home.

Victoria disputed Ms Berejiklian's suggestions that it did not inform NSW before the decision was made, and said NSW health authorities and ministers had been kept up to date.

Victoria's Health Minister Martin Foley said on Sunday there were also phone conversations every day and, when the decision to close the border was taken, he alerted his interstate colleagues.

"It did not come as a shock to my NSW colleagues that after some two weeks of community transmission across NSW … Victoria was prepared to make the hard decision to keep Victorians safe," Mr Foley said.

Ms Berejiklian said NSW should have been given "a chance to demonstrate our capacity to get on top of the virus without adversely impacting our citizens" before the border was closed.

"Closing a border can affect literally, tens and hundreds of thousands of people, depending on where it is, and that's a big call," Ms Berejiklian said.

Victoria's deputy chief health officer Allen Cheng also spoke to the South Australia and Queensland chief health officers before 9am on New Year's Eve about the public health advice his team would be giving to Victoria on closing the borders, according to a senior Victorian government source.

Mr Foley also spoke to NSW Health Minister Brad Hazzard throughout the day about the Andrews government's plans to shut the border, while Ms Allan called and texted Ms Berejiklian about their intentions, the source said.

A senior Victorian government source said: "If NSW had done the decent, proper and fast intervention that Queensland had done, we wouldn't have closed the border."

Mr Hazzard said he speaks daily to his Victorian counterpart and they have a "trusting relationship".

"My understanding of the point the Premier was making is that on issues of great gravity and enormous impact, such as a border closure, she believes it is best for our respective communities if there is a direct and prior communication between state leaders before announcements are made," Mr Hazzard said.

"I support the Premier's view but can confirm the veracity of Martin Foley's statement and he and I communicate daily (sometimes on multiple occasions) and we have a trusting relationship that I believe assists both NSW and Victoria in the war on COVID-19."

The northern beaches outbreak, which originated in Avalon, reached 150 COVID-19 cases on Sunday after one case linked to a close contact was reported in the 24 hours to 8pm on Saturday.

There were also two new cases linked to the Berala cluster, which now has 23 cases, from 23,763 tests in the reporting period.

Ms Berejiklian said it was her understanding that the border could reopen sometime this week.

Victoria's COVID-19 response commander Jeroen Weimar said: ''[Chief health officer] Brett [Sutton] will be reviewing these issues over the coming day or two to assess performance here on the Victorian side of the border, but also to look at the progress on the NSW side.

"I know he's looking at it very closely, and I'm sure he'll have something to say over the next few days."