It’s been three long years since the last Sydney Contemporary, and the market is more of a puzzle than ever. During the pandemic, when predictions of doom and gloom abounded, many local art dealers enjoyed surprisingly good seasons. It’s widely believed this was because wealthy collectors who had got into the habit of purchasing work from international art fairs found themselves stranded in Australia and rekindled an interest in the homegrown product. Another reason was the boredom factor. Sitting around, day after day, people began to feel dissatisfied with their domestic environment. Time to buy some new furniture! New curtains! Upgrade the TV! Get some new art!

While COVID-19 might have proved healthy for the Australian art market, there are important new factors to add into the mix. Steepling inflation and rising interest rates are not incentives to go wild at the art fair, as those struggling to pay mortgages are unlikely to be eager collectors. Buying art is one of those habits that doesn’t come naturally to Australians unless one’s parents have been active in this area.

Australia never seems to be short of new money, and this is where things get interesting. The abiding hope of every one of the 90+ commercial galleries participating in this pricey exercise is to meet new clients who will return again and again. In this sense, Sydney Contemporary is an index of cultural change. If the fair attracts more visitors every year and generates an increasing volume of sales, it indicates Australians are overcoming their notorious philistinism and becoming part of the global art world. 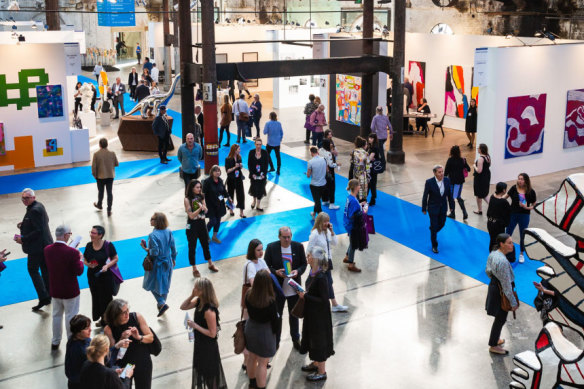 We have a long way to go. The art fair’s founder Tim Etchells says that in 2019 the total value of sales at Sydney Contemporary was approximately $18 million. In this year’s Art Basel, considered the world’s leading contemporary fair, a single work by Louise Bourgeois sold for US$40 million (AUD$58 million). As for total sales at Basel, nobody has been able to do the sums.

One of the peculiarities of the Australian market is that everybody seems to believe art should be cheap. Even collectors who might drop a million for a work by a big-name international artist at a foreign gallery expect to pick up bargains at home. These practices may be starting to be broken down by some startling recent auction results, but dealers are still cautious about pushing prices too high, too quickly.

If you happen to be one of Australia’s 137 billionaires, there’s nothing at Sydney Contemporary that should make you blink. The highest-priced work at the fair is also the largest on display. It’s not by Louise Bourgeois, but by Mary Tonkin, from the Dandenongs. It’s not going for $50 million, but for a bit more than $600,000 – a mere snip, considering the painting, Ramble, Kalorama (2017-19) is almost 19 metres in length, divided into 21 panels. This imposing bush landscape is being sold by Australian Galleries, who would love to see the piece acquired by a museum but would probably settle for a private collector with a very big wall.

At the other end of the scale, there are numerous galleries selling works for a few thousand dollars apiece, not to mention an entire “paper” section devoted to prints, drawings, and posters, most of them relatively inexpensive. Those who simply can’t leave without buying something will often end their visit in this part of the fair. 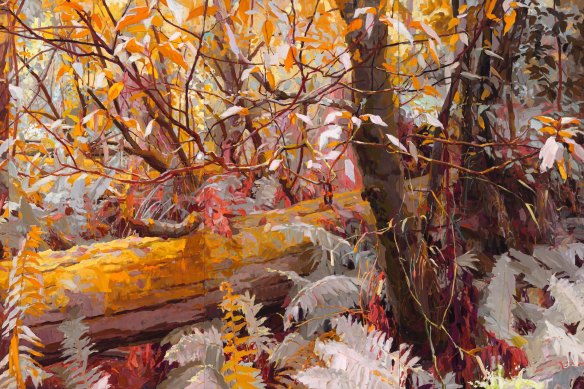 If you nurture fantasies of being a successful art investor, my tip would be to buy a more expensive work. Low-priced items accumulate value slowly, if at all, while high-priced ones tend to do much better. It should also be noted that for a worthwhile return one shouldn’t consider selling for at least five years, or better still, 15. There are a few impressive secondary market success stories on display in the booths belonging Justin Miller, Annette Larkin, and Brisbane newcomers, A Secondary Eye.

Many of the leading galleries take a no-nonsense approach, showing works by a range of artists. The list includes Martin Browne Contemporary, Roslyn Oxley9, Sullivan + Strumpf, Olsen Gallery, MARS, Nanda/Hobbs, Dominik Mersch, Niagara, ARC ONE, Bett Gallery, Arthouse and Yavuz Gallery. Others choose to highlight a single artist, which can be both rewarding and risky. Critical acclaim is good for the ego, but sales are crucial.

Michael Reid, for whom no rules ever seem to apply, has had an each-way bet, with his Sydney + Berlin stall hosting an elegant solo installation by photographer, Tamara Dean, and his Murrurundi stall (yes, Murrurundi), packed to the rafters with small saleable pictures and objects. Wagner Contemporary has also hedged its bets, taking three stalls to show the work of three artists, Eleanor Millard, Al Poulet and Nigel Sense. At THIS IS NO FANTASY, Vincent Namatjira makes a pretty good attempt at stealing the show with an epic series of portraits of Queen Elizabeth and the Royal Family. Don’t forget to peek around the corner for the amazing paintings of Jonathon World Peace Bush.

One legacy of the pandemic is that this year’s participating galleries are drawn exclusively from Australia and New Zealand, but the kiwis are distinctive enough to provide a point of difference. Look at the work shown by galleries such as STARKWHITE, PAULNACHE and Gow Langsford, along with Fox Jensen, which straddles the Tasman, and there’s a more challenging style than most of their Australian counterparts. 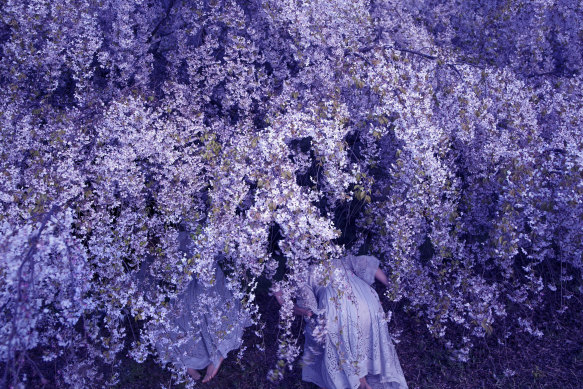 Of the specialised Aboriginal art dealers, D’Lan Davidson has a stunning show of works from Balgo, while Utopia Art has a masterpiece display of central and western desert painting. Sabbia Gallery is the place for top-of-the-line glass and ceramics, although one shouldn’t overlook Sally Dan-Cuthbert. Vermilion Art is the only venue exclusively devoted to Chinese artists.

New galleries, interstate galleries, the National Art School’s showcase of student work; collaborations such as the one between Max Germanos’s 3.33 Art Projects and Artist Profile magazine… there’s far too much to talk about. In addition to the galleries there are 16 separate artist installations, including a whimsical-but-insightful sculpture by Kenny Pittock of the world turned pear-shaped. 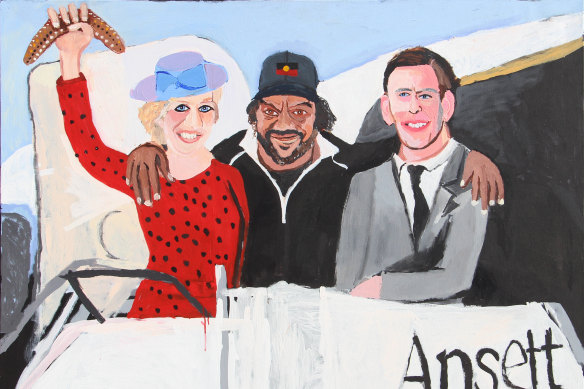 One of the hardest things to do in an art fair is to stand out from the crowd. Darren Knight has managed this feat by the novel expedient of taking a detail from a work by Louise Weaver and wrapping it around his booth as wallpaper. In a trompe-l’œil effect, a flat wall becomes creased and crumpled, making us look twice at this oddity. The central attraction is an even greater oddity, in the form of a mind-bending new painting by James Morrison, featuring not three graces but three frogs, one of them holding a ukulele. If he’s playing April Sun in Cuba we’re probably not looking at a frog but a toad.

The keen collectors get in as early as they can, but Saturday is the big day for the general public, so don’t even think about parking. By day three of the fair one should be able to tell, by the calmness or desperation displayed by the dealers, whether sales are up or down. Whatever happens, expect that attendances will be sky-high. Sydney may not be a city of art fanatics, but it loves nothing more than a grand spectacle with the possibility of shopping.

Sydney Contemporary is at Carriageworks until Sunday.