Controversial superannuation reforms giving the federal government the ability to intervene in funds’ investment decisions are facing an uphill battle with crossbench MPs who say the changes hand too much power to the government.

Crossbench MPs Craig Kelly and Bob Katter are not prepared to support the government’s bill due to concerns about the veto powers the new scheme hands the federal government to intervene in investment and spending decisions as well as new measures “stapling” super funds to workers so their fund follows them when they switch jobs. 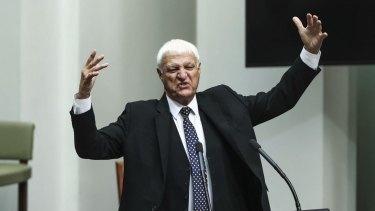 Bob Katter said the superannuation policy has potential for misuse in future.Credit:Dominic Lorrimer

The Your Future, Your Super reforms, unveiled in last year’s federal budget, aim to reduce the number of duplicate superannuation accounts being created, improve efficiency and lift the investment performance of the sector. The changes include a raft of new measures including powers for the government to intervene in superannuation funds’ spending decisions and requiring funds to meet new performance benchmarks.

Labor superannuation spokesman Stephen Jones previously wrote to MPs and major business groups to warn them about the extra powers the legislation would hand to the treasurer, describing it as bad for investment, particularly in regional areas.

Independent MP Craig Kelly, who quit the Liberal Party in February, said he could not support the package in its current form with the stapling and veto powers unchanged.

He did say, however, he would support a “Josh Frydenberg amendment” allowing the current treasurer, but not a future treasurer, to be directly involved in investment decisions. 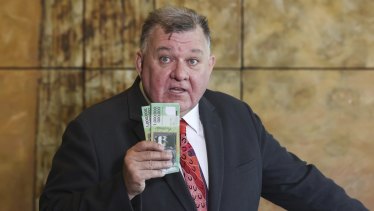 Craig Kelly doesn’t believe the treasurer should have the power to veto superannuation funds’ investments.Credit:Alex Ellinghausen

“There are others [who might be treasurer] down the track I don’t believe should have those powers,” he said. “I look at what we believe in … freedom of choice, small government.

“And then we’re going to hand the Treasurer the power to rewrite contracts?”

In regards to the stapling rules, Mr Kelly said he was concerned workers switching to more dangerous jobs could be left without adequate insurance in their funds.

Construction industry-focused super fund Cbus previously requested changes to the reforms due to concerns about insurance. The fund was requesting some form of carve-out for those in building and high-risk sectors, to ensure they are properly covered.

Crossbench MP Bob Katter was also concerned by the same issues, saying the “right of veto that lies with the Treasurer” was a significant risk. He said his position was “not against Josh [Frydenberg]” but against the policy’s potential for misuse in future.

He said he’d prefer the Labor model for stapling where the superannuation money would follow the individual but not the fund itself. He said the insurance aspect was a “minor” concern, but an issue nonetheless.

He said this measure could result in major withdrawals from the funds when members are notified, leaving those who do not respond quickly suffering financially, and also act as a disincentive for funds to invest in long-term assets such as agriculture, which can be affected by long droughts.