Industry Super Australia is launching a new attack on the federal government’s shake up of the superannuation sector with an advertising blitz to warn millions of workers their retirement accounts will follow them when they switch employers even if their fund fails to deliver strong returns.

Radio and online advertisements from Industry Super telling the public that from Monday they could be stuck to a dud fund losing them money in retirement is the latest escalation of tensions between the major lobby group and the government in the lead up to the federal election. 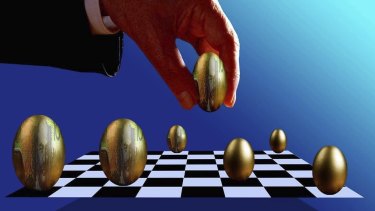 Workers and their superannuation funds will be stapled together from Monday onwards.Credit:Greg Newington

The so-called “stapling” change introduced as part of the government’s Your Future, Your Super package means that when an employee switches job their new workplace will automatically pay super into their existing account rather than create another one. The lobby group has been at loggerheads with the government over several of its changes to the sector over the past 18 months.

Now, Industry Super is concerned many Australians do not know about stapling and claim it could mean some workers end up tied to their fund forever. On their calculations, being stuck to a poor performing fund could mean a difference of up to $230,000 in their final super balance compared to if they had switched to a better one.

UMR Research survey results, commissioned by the lobby group, found the term “stapling” was poorly understood and the overwhelming majority either did not know the rules were changing or had only a vague understanding of what was happening.

Industry Super unsuccessfully lobbied for stapling to only occur after the federal government had weeded out underperformers using new investment benchmark tests, estimating about one million people have funds with underperforming providers. Some funds are not yet measured against the benchmarks.

However, Superannuation Minister Jane Hume last week told Senate estimates workers still could switch at any time they liked while the changes would stop the creation of duplicate accounts and a publicly available super comparison tool online had already attracted over 750,000 views. Funds found to be underperforming by the regulator are required to notify members.

Senator Hume said in a statement the measures would minimise multiple accounts and improve savings by reducing fees and extra unneeded insurance premiums.

“It is not for life, it happens only when changing jobs, and only to those individuals who have not exercised their right to choose their own fund,” she said.

Industry Super chief executive Bernie Dean said it was concerning most people were not fully aware of the significant changes to superannuation.

“Being stuck to a dud fund could punch a huge hole in a person’s nest egg, and that is going to limit how much they enjoy life in retirement – people should make sure they are with a good fund,” he said.

“Given the risks to so many people’s livelihoods the government needs to tighten up protections to make sure people are only stapled to the best funds that have passed the performance tests.”

Get daily updates on the climate summit that will shape our future. Sign up to our COP26 newsletter here.