Eczema sufferer who was asked if she’d had acid thrown in her face praises £4.99 moisturising cream that improved her skin in just four days

An eczema sufferer whose condition got so bad it caused her skin to blister and feel like she’d been stung by bees has praised a £4.99 cream for helping to improve her redness in just four days.

Laura Scoble, 20, from Plymouth, told how she’s suffered with eczema, which is mostly visible on her face, from just six-months-old.

‘I also have dyshidrotic eczema on my hands which blisters under the skin,’ explained the geography student. ‘The blisters are red and itchy and sometimes fill with fluid. When my flare-ups are at their worst my skin feels like I’m being stung by a swarm of bees.’

While Laura claims over-the-counter products recommended by her doctor failed to work, she has taken solace in an intensive moisturising cream, costing £4.99, and a change of diet. 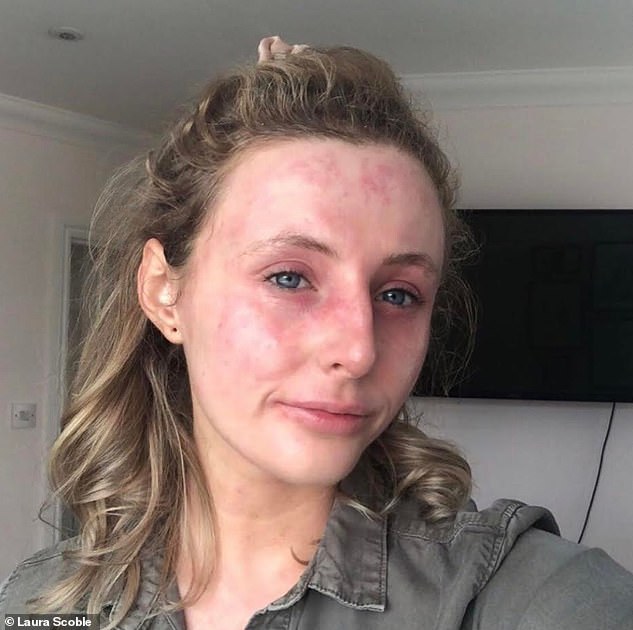 Laura, 20, from Plymouth, has praised a £4.99 cream for helping to improve her the redness of her severe eczema in just four days. Pictured, before applying the product 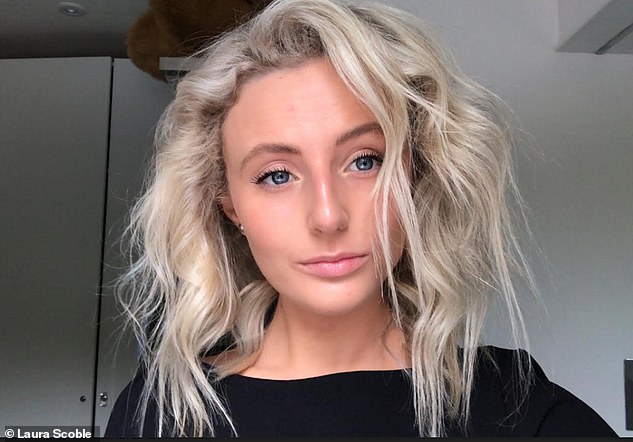 Laura says her eczema has not only manifested itself physically, but causes her asthma to worsen during flare-ups, too.

‘My eczema was at its worst between the ages of 8 and 15, causing me to be seriously bullied at school,’ she explained.

‘My mum thought my eczema was due to stress which created an ongoing cycle. Our doctors said I’d grow out of it, but I never did.’ 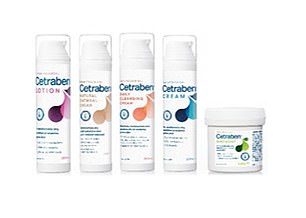 Laura went on to say that when she was younger, she didn’t really understand her eczema, but knew it was something that made her ‘stand out from the crowd.’

‘My skin would cause people to stare or make comments, which were often really hurtful,’ she said.

‘When my face would flare up after swimming, girls at school would call me “red panda.”

She added: ‘When I was slightly older and started working between studying, customers at my retail job sometimes asked not to be served by me for fear of my eczema being contagious’.

‘In more recent years someone on a night out once told me they thought I’d had acid thrown at my face.’ 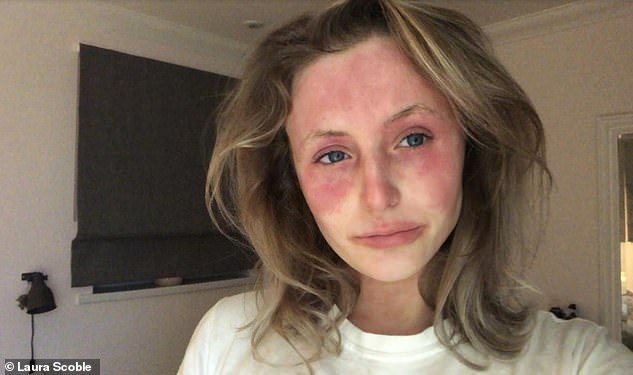 Laura described her blisters as ‘red and itchy’ and added that they will ‘sometimes fill with fluid.’ Pictured, before applying the product 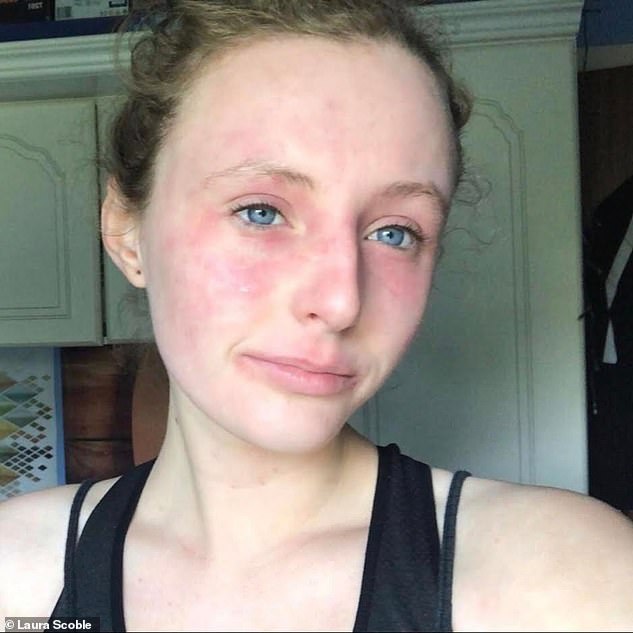 Laura says her eczema has not only manifested itself physically, but causes her asthma to worsen during flare-ups, too. Pictured, the eczema at its worse 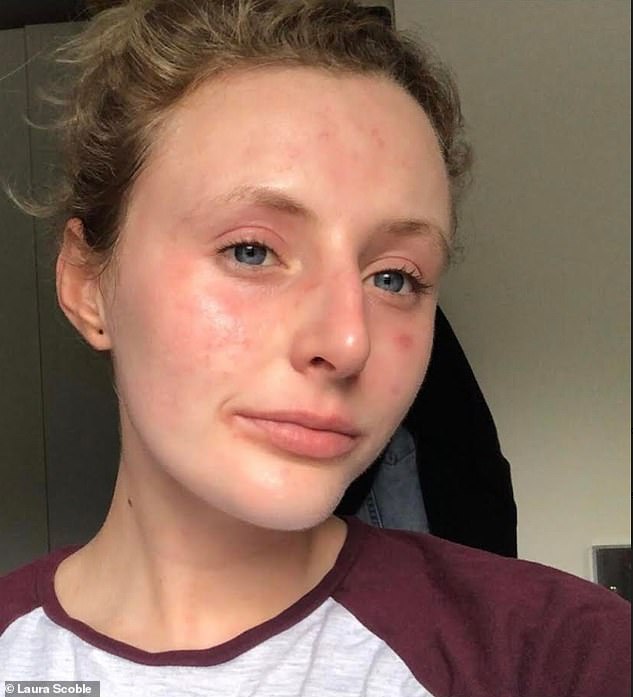 The 20-year-old explained that her eczema was at its worst between the ages of 8 and 15, and caused her to be bullied at school. Pictured, before applying the product 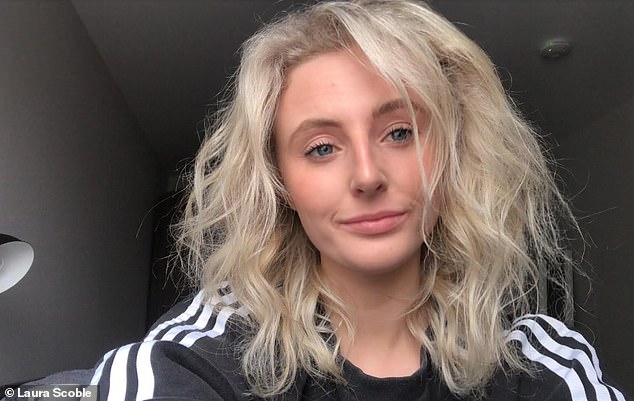 While there’s no cure for eczema, Laura says that Cetraben combined with a more personalised diet is the closest thing to a “cure” she’s found. Pictured, with her improved skin

The student says the lack of knowledge around eczema as a condition is shocking, and she’s found that all her life, people have struggled to understand it.

‘As eczema often creates such a negative reaction from other people, it became ingrained in my brain that it’s a terrible tragedy to have it,’ said Laura. ‘Yet there was nothing I was doing that seemed to make it go away.’

Eczema is an inflammatory condition of the skin that leads to redness, blistering, oozing, scaling and thickening.

It usually appears in the first few months of life and affects around 10 per cent of babies.

Eczema’s cause is not fully understood but it is thought to be brought on by the skin’s barrier to the outside world not working properly, which allows irritants and allergy-inducing substances to enter.

It may be genetic due to the condition often running in families.

As well as their skin being affected, sufferers may experience insomnia and irritability.

Many factors can make eczema worse. These may include:

There is no cure for eczema, however, 70 per cent of childhood sufferers no longer have the condition in their teens.

Patients should avoid known triggers for flare ups and use emollients.

She went on to explain her eczema has caused her to ‘really struggle’ with her confidence.

‘There have been times where I’ve been unable to go out with friends due to lack of confidence about how I looked,’ she said.

‘There was a time in my life where I stopped going to the gym and even almost broke up with a boyfriend because of my eczema.

The 20-year-old spent years seeing her doctor who prescribed her with various different steroid creams and solutions, but nothing seemed to help improve her condition in the long-term.

Then a couple of years ago, two things happened which Laura claims have made huge improvements to her skin for the better.

‘Firstly, I was finally referred for a food allergy test and secondly I discovered Cetraben Cream in Boots,’ she explained.

‘I felt relieved to finally have an answer after all these years.’

‘I began to change my diet, realising that my skin reacted badly to dairy, some fruits and vegetables, but mainly red meat.’

‘Following my food allergy test, I started to think about the creams I was using to manage my eczema. Whilst cutting out certain food groups helped prevent such severe flare-ups, my eczema was still present.’

So, after being prescribed various creams over the years, Laura started doing her own research.

‘I discovered Cetraben Cream worked wonders overnight, lessening the symptoms of my flare-ups and preventing any itchiness,’ she said.

‘I now use it everyday as this, combined with a new dietary approach, massively helps to prevent flare-ups and soothe my skin.’ 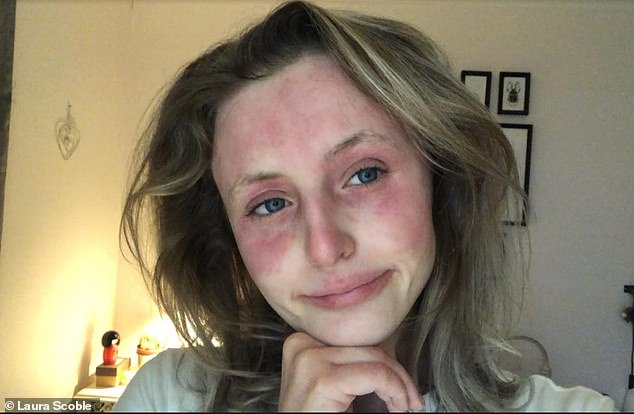 Recalling one particularly memorable moment, Laura said: ‘In more recent years someone on a night out once told me they thought I’d had acid thrown at my face’ 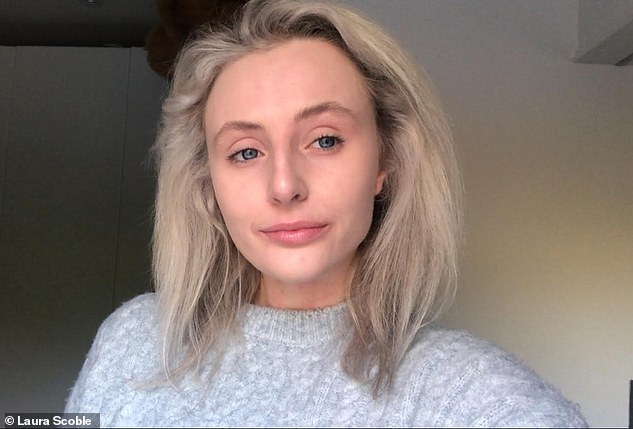 The student now uses Instagram as a platform to share her life with eczema. Pictured, after using the product

She added: ‘Although there is no cure for eczema, the cream, combined with a more personalised diet overall, is the closest thing to a “cure” that I’ve found.

While her eczema will never go away, Laura says she feels happy to finally be in a routine with her diet and skincare that allows her to take part in activities she’s missed out on.

‘Now I have my skin under control, the gym plays a huge part in my lifestyle and in building my self-confidence back up,’ Laura explained.

‘Because my flare-ups are prevented, my asthma has also improved and I no longer feel the need to carry my asthma pump everywhere.’

She continued: ‘Unless you’ve had eczema yourself, you can never fully understand what it’s like mentally to have it in your day to day life.

‘That’s why I now use Instagram as a platform to share my life with eczema. It’s great to be a part of an online community with a shared experience.’ 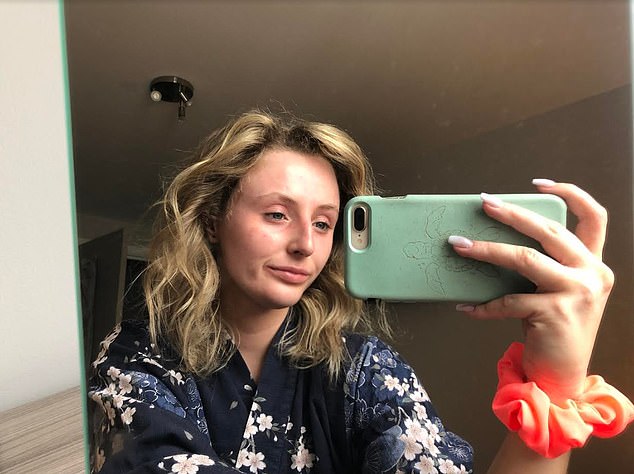 Laura says she often has people messaging her on social media telling them about their experiences with eczema. Pictured, after applying the product 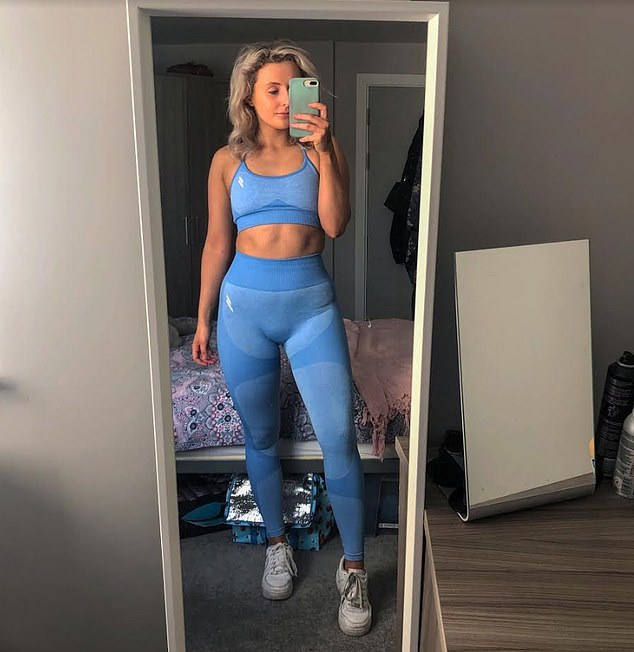 The 20-year-old says the gym plays a huge part in her lifestyle and in building her self-confidence back up. Pictured, after applying the product