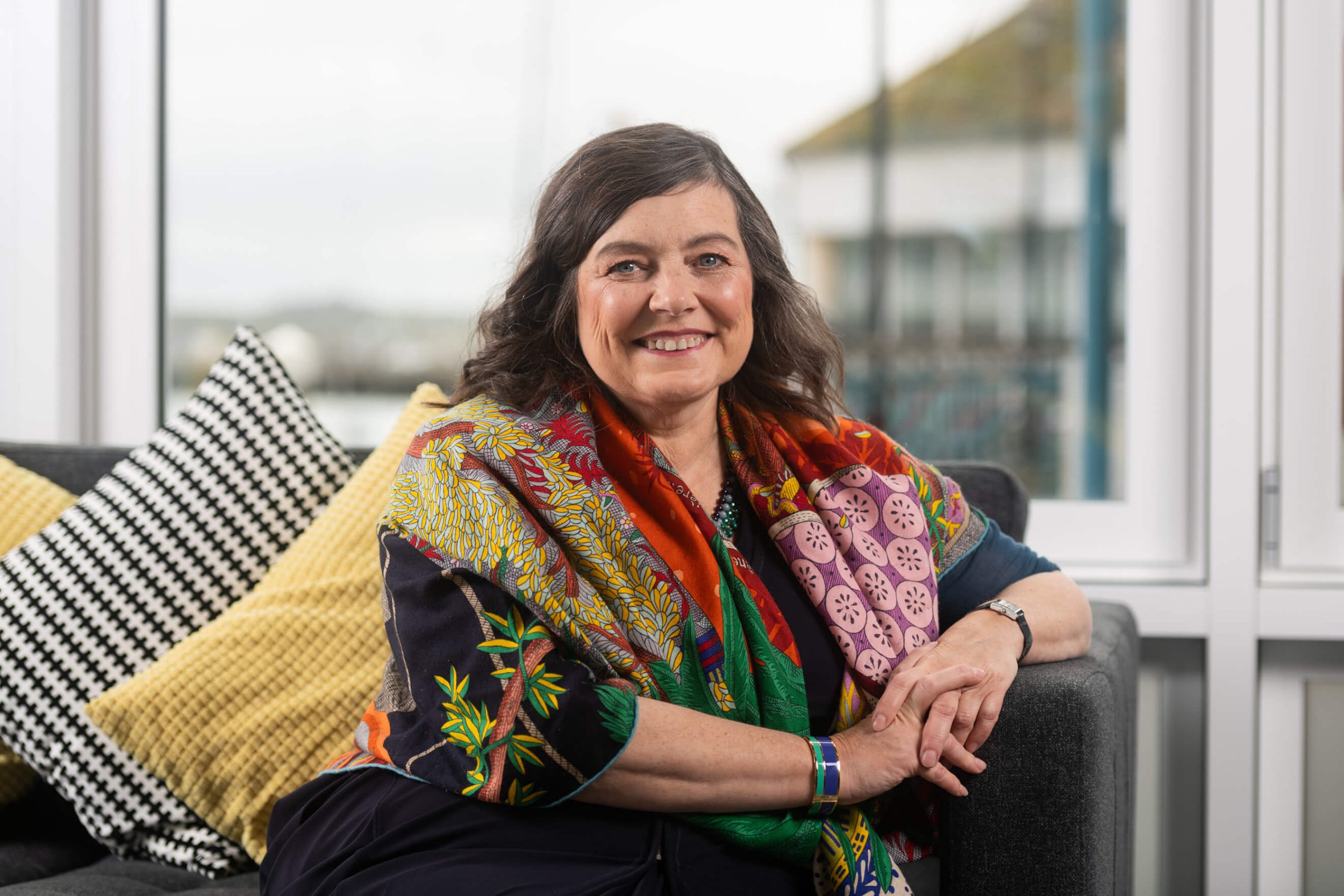 She works a lot from the living room of her modest Marlow home next to a bookshelf packed with non-fiction; she only just started using a television streaming service recently, as they seemed rather expensive; she didn’t splash out on a new table and chairs set for the garden because half the year it won’t get used; and in the garage is a frugal, eco-friendly Tesla.

‘I don’t think I’m a risk-taker,’ says Anne in her gentle Welsh accent. ‘But then, someone did say to me the other day, “You did start a bank, Anne.”’

Anne did exactly that — she started Starling Bank, a real, award-winning, fully licensed and regulated bank, that is headquartered in London, has offices in Southampton, Cardiff and Dublin, and employs more than 1,000 people.

Growing up in Swansea, the only child of a steel worker father and a mother who worked in a department store, Anne joined Lloyds as a graduate trainee after Swansea University before embarking on a 30-year career at some of the world’s best-known financial institutions, among them Allied Irish Banks, UBS and ABN AMRO.

It was after the crash of 2008 that she started to notice how she would tell taxi drivers that her job was anything but a banker.

‘I went in as a graduate because I thought [banking] was an honourable job,’ she says. ‘I became ashamed to be a banker after 2008 but now I am proud of what I am doing in Starling.’

Not long after, Anne left her job as chief operating officer of AIB and in 2014 moved to Buckinghamshire, where she began sitting in internet cafes sending endless emails to chase up on meetings and catch up with contacts, in the hope of gathering support for her idea of a new bank.

When she finally persuaded some companies to get onboard on a contingency fee arrangement, more than £1million in debt had amassed but Starling was formed.

She took on Tom Blomfield, the stylish, bearded Oxford graduate, as chief technology officer but the pair split, with Tom taking the small team with him to set up rival Monzo Bank.

Having studied computer science at university, Anne says she had an advantage on big banks because she could see the potential for digital technology to revolutionise the way people and small businesses do their banking.

The company would be completely online, with 24-hour support, and is constantly updating and improving to meet customer needs. On the day of the interview Starling had made five different updates to technology platforms — and it was only lunchtime.

There are no branches, but that’s because people don’t need them anymore, Anne tells us.

‘I believe that banking and banks have forgotten their purpose — to be a responsible organisation,’ she explains. ‘We are not a shop. We are not there to sell products. We are there to be someone’s friend and serve the customer in a responsible way. The most important thing in your life is your health and your financial health and that’s where we start and design products in a customer-centric way.’

Anne believes our personal finances will be conducted differently in the future, too. ‘I think the world will be cashless and cardless, and I think this is a good thing. It will be a world where we pay for everything on our mobile phone.’

How about when the phone battery runs out, as it does in mine quite often, I ask. Anne laughs — she tells me later that Zoom meetings and interviews are what make her working life enjoyable, rather than a chore. ‘Mobile phone technology is getting better and better,’ she says.

She continues: ‘[In the future] I think that Starling will take market share from the big banks. But by the time we get to 300 years in the future organisations will do things differently. I think people will make micro payments instead of big payments. For example, rather than in one lump sum you might pay your car insurance as you drive the car.

‘Or will you still be driving it — maybe it is self driving?’

Since launching in 2017 Starling’s deposit base has grown to nearly £5.4billion and they now have 2.3million accounts.

The digital bank recently launched a recycled debit card — the first UK Mastercard debit card to be made from recycled plastic — which will be rolled out to all new customers moving forward. Women make up 46% of the Executive Team, 44% of senior managers and 40% of the board.

Anne says Starling is looking at ways for people to help manage family accounts from one app. They already have Starling Kite, a debit card for kids to help them manage their pocket money and turn their spending into skills.

‘We are starting the next phase. The next stage is to grow and to move the platform forward. We will develop far more features. At the moment people have one account and one card but we are working on different ways we can connect people together. Just like a business has different people managing different parts of the business, so an individual can delegate different parts of their finances.’

Infamously a workaholic, Anne has said in the past that she doesn’t have a work/life balance, just work. ‘But I’m extremely lucky. I get to do something interesting and valuable. I meet great people. I have a nice job. Lots of people don’t like their jobs.

‘We are passionate about what we do. We quite enjoy ourselves and get a lot of pleasure out of it.’

ANNE’S WORDS OF WISDOM ON…

Bitcoin and cryptocurrency is finding more of an established, less risky place in the financial world, but Anne remains cautious.

‘If you asked me a year ago, I’d stay well clear. Ask me this year and perhaps in the future we’ll take more of an interest. It is still a very risky investment for most people — only get involved in Bitcoin if you can afford to lose it and if you understand it — most people don’t understand it.’

And could cryptocurrency be incorporated in a bank like Starling? ‘Not at the moment, perhaps in a few years’ time, but definitely not in the next two or three years.’

An interesting side effect of Covid is that it has played a large part in the rise of online banking such as with Starling, as well as e-commerce, with many people working from home and the high streets shut down.

‘There was a trend towards e-commerce, but this has been accelerated by ten years. The pandemic has pushed the move to digital. There are certain trends in the pandemic that will continue, like working remotely, that will be here to stay.’

Investing in property is still a solid investment, she says, and first-time buying should be encouraged, but Anne believes it is still too difficult for many people to get on the property ladder.

‘We do need to help people get on the property ladder but we have to realise that most people are not in jobs where they can get mortgages. People consider mortgages as not real debt, which is one way of looking at it, but saving for your home and then having some help to buy it is a good idea. If you have the opportunity you should do it.’