Springwatch star Lucy Hodson says she was flashed by a man – who then filmed her reaction – while out birdwatching at a riverbank, saying the experience has left her feeling like her ‘safe place of solace’ has been tarnished.

Lucy, 30, was alone watching an egret in Tamworth, Staffordshire, last year, when she spotted the man exposing himself across the river.

She said the incident saw her froze, leaving her ‘shocked and terrified’, and that, months on, the incident has stayed with her, making her anxious about doing the thing she loves the most – being in the outdoors exploring alone. 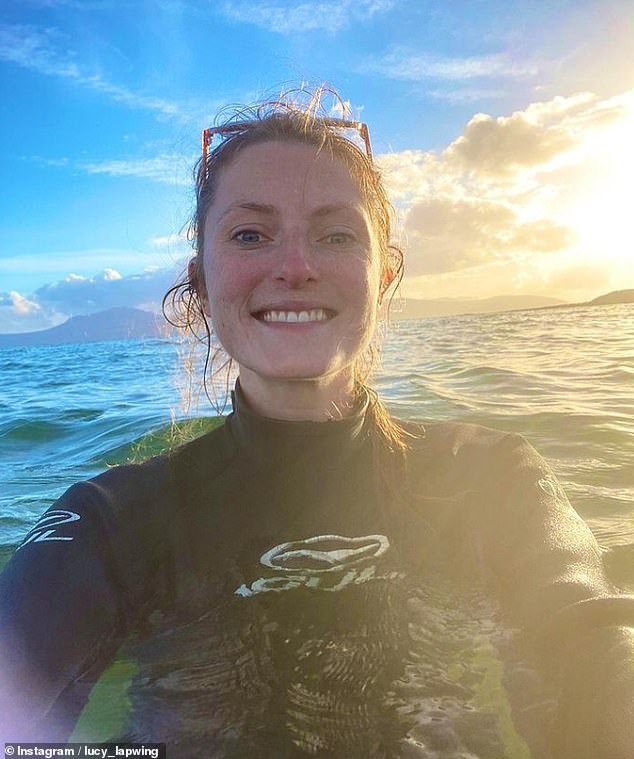 She told The Sun: ‘A man opposite me on the river was exposing himself. I was shocked and terrified. I always thought I’d cope in that scenario, but I just froze.

‘Mostly because he was filming me. All I could think was that my video was going to end up on some weird forum.’

She said she shouted at a mother and daughter who were about to pass the man to go another way, and then called the police – but feared her description of a ‘white man in his 30s or 40s in dark clothes doesn’t get very far.’

Lucy calls herself a Wildlife Weirdo Naturalist & Conservationist, she’s an ambassador for @beavertrust, and makes it her mission to have a world with more ‘wild’ in it and she often uses her Radio 4 show to campaign for a safer countryside for women. 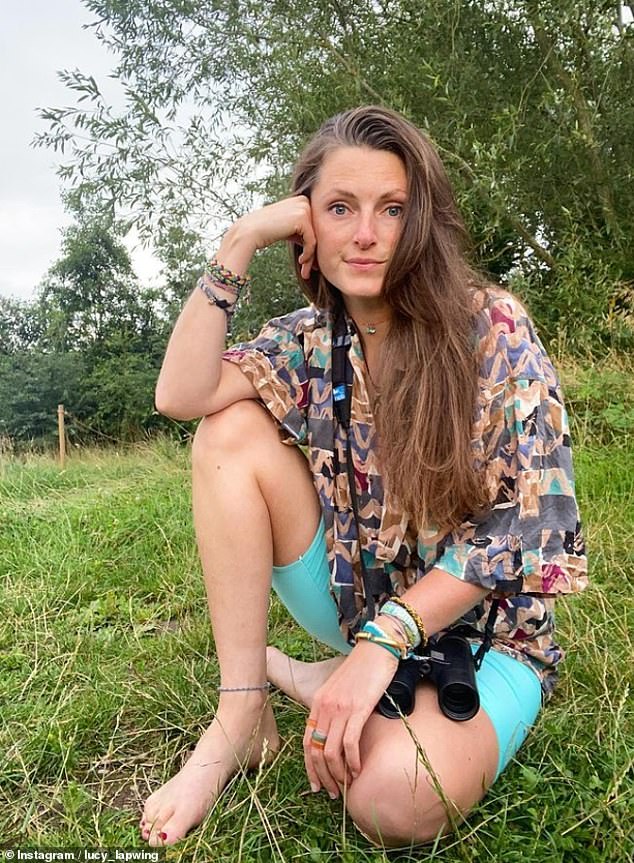 Lucy, 30, was alone watching an egret in Tamworth, Staffordshire, last year, when she spotted a random man exposing himself and filming her at the same time

She added: ‘Flashing is sexual assault. I may not have been physically hurt but it affected me mentally.

‘When I was walking home I saw a man on the footpath and was scared. Then I realised it was my colleague’s husband. I was a crying mess and told him what happened.

The star admitted that she’s ‘still shaken’ and is now ‘constantly assessing’ the risk of it happening again when she’s outdoors for her work.

Springwatch – alongside Autumnwatch and Winterwatch – is an annual BBC Two television series about British wildlife.

The programmes are filmed from locations around the country, sometimes with a crew of 100 and over 50 cameras. It’s known as BBC’s largest British outside broadcast event. 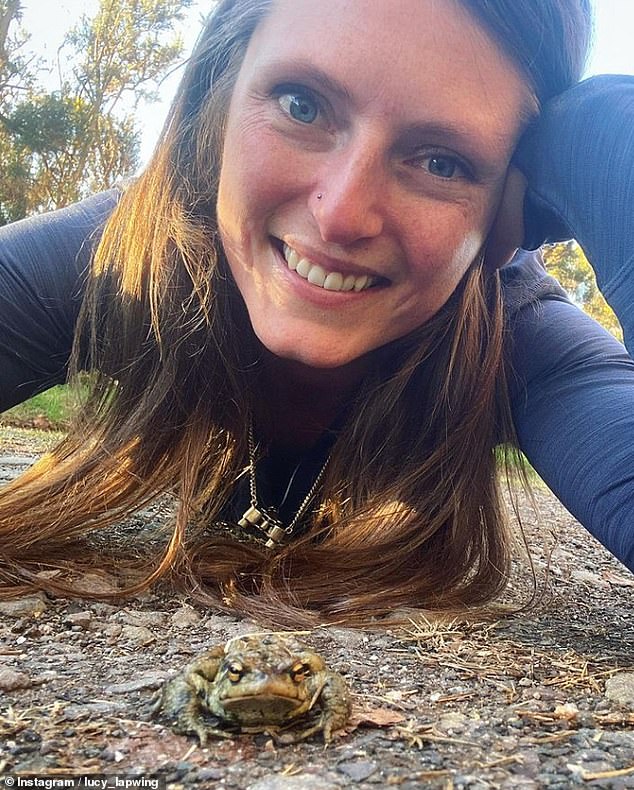 She said on her Instagram account: ‘Walking around as a lone woman, a catalogue of ‘what ifs’ regularly race through your head. My female friends share these worries too. On nature walks, we subconsciously plan an escape. A path to run down, or a door to knock on – even jumping into a canal has crossed my mind before.

‘Last year, my fears became a reality. I won’t go into detail, but I had a horrible experience whilst out birdwatching. For a long time after, I was rattled. My safe place of solace and peace had been shattered. I birdwatched with my back to a wall or hedge. I glanced over my shoulders constantly. I felt hurt and frustrated that single horrible incident, carried out by one individual, had impacted upon the thing I loved doing so much. 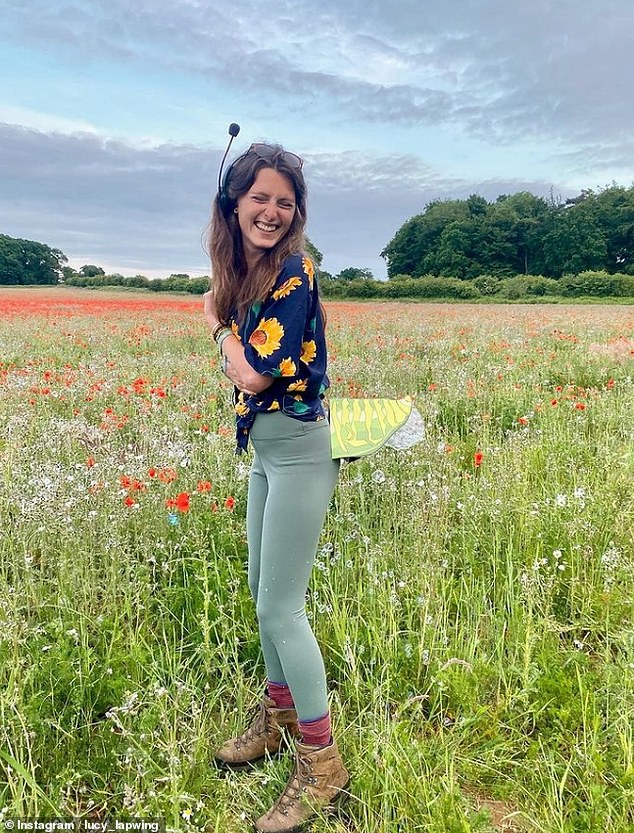 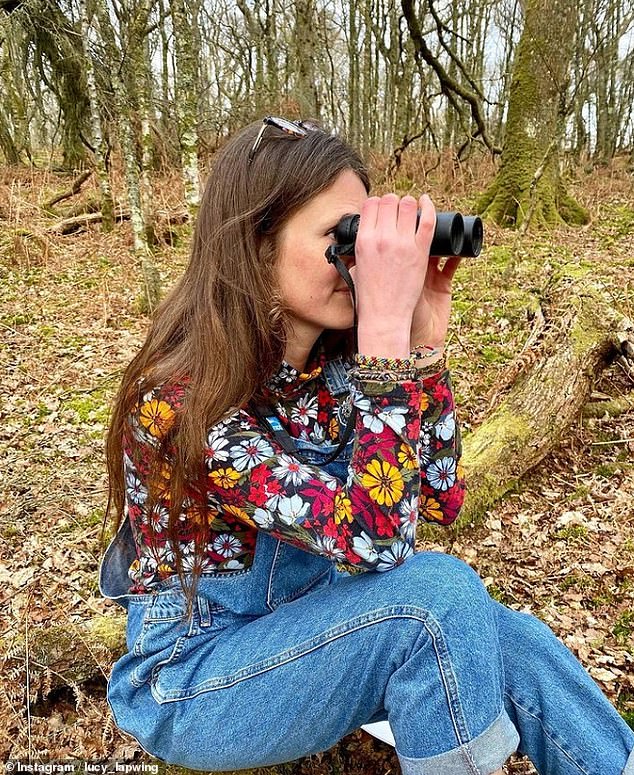 On her Instagram account she wrote: ‘Walking around as a lone woman, a catalogue of ‘what ifs’ regularly race through your head. My female friends share these worries too. On nature walks, we subconsciously plan an escape.’

‘There’s a shared understanding between a lot of women – this mix of fear, uneasiness and outrage is a familiar cocktail in a world where sexual harassment is so widespread. But I’ve also learned how women supporting women, lifting each other up and sharing our joy together, is a wonderful, powerful thing.

‘This week I talked about my experience on @BBCRadio4. In doing it, I had the absolute ‘honour’ of meeting four other badass, wonderful, kind women who adventure in the outdoors alone.’ 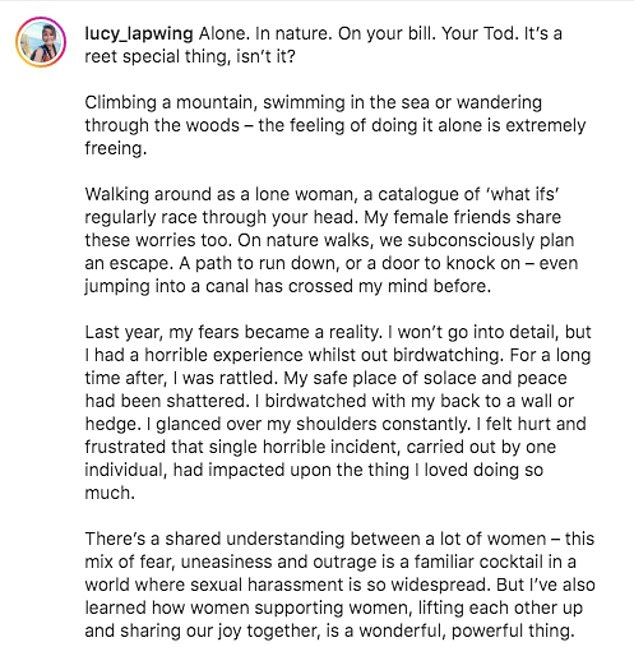 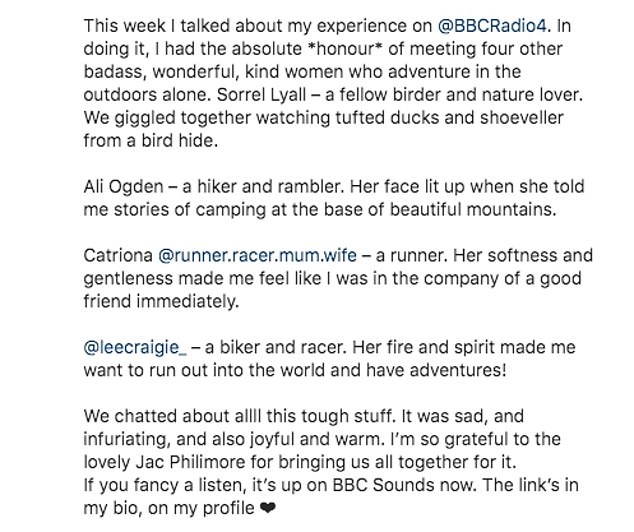 She mentioned Sorrel Lyall – a fellow birder and nature lover. As well as Ali Ogden – a hiker and rambler, who goes camping at the base of beautiful mountains. Also runner Catriona @runner.racer.mum.wife. And @leecraigie_ – a biker and racer.

She said: ‘We chatted about all this tough stuff. It was sad, and infuriating, and also joyful and warm.’ 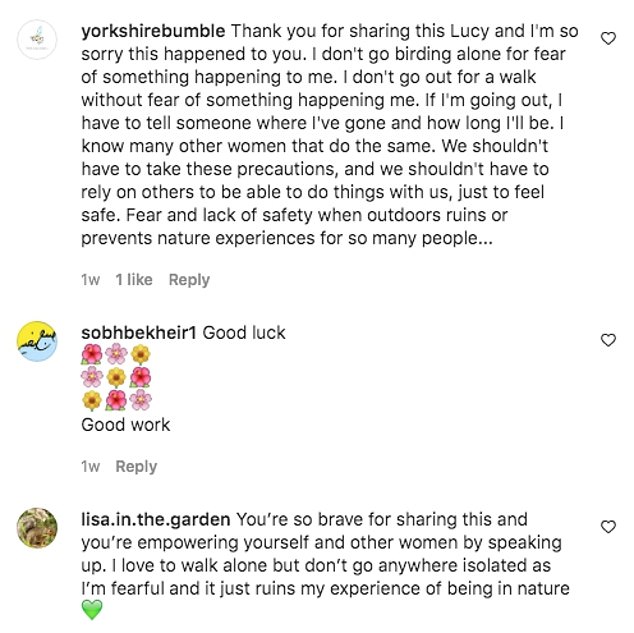 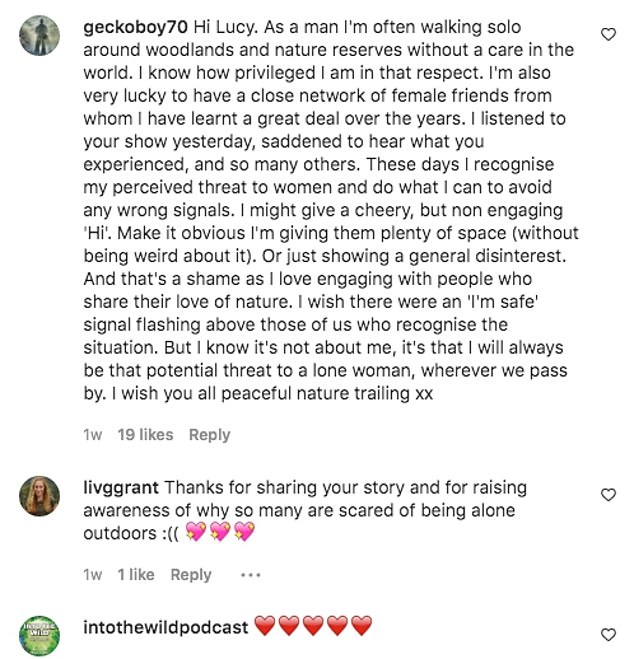 Supporters were quick to post messages of solidarity, with one gentleman sharing his thoughts on the issue explaining: ‘These days I recognise my perceived threat to women and do what I can to avoid any wrong signals.’

Fans of Lucy were quick to post messages of support on her Instagram page. With many thanking her for sharing her experience.

One wrote: ‘You’re so brave for sharing this and you’re empowering yourself and other women by speaking up. I love to walk alone but don’t go anywhere isolated as I’m fearful and it just ruins my experience of being in nature.’

While one man even posted: ‘Hi Lucy. As a man I’m often walking solo around woodlands and nature reserves without a care in the world. I know how privileged I am in that respect. I’m also very lucky to have a close network of female friends from whom I have learnt a great deal over the years. I listened to your show yesterday, saddened to hear what you experienced, and so many others.

‘These days I recognise my perceived threat to women and do what I can to avoid any wrong signals. I might give a cheery, but non engaging ‘Hi’. Make it obvious I’m giving them plenty of space (without being weird about it). Or just showing a general disinterest. And that’s a shame as I love engaging with people who share their love of nature.

‘I wish there were an ‘I’m safe’ signal flashing above those of us who recognise the situation. But I know it’s not about me, it’s that I will always be that potential threat to a lone woman, wherever we pass by. I wish you all peaceful nature trailing.’