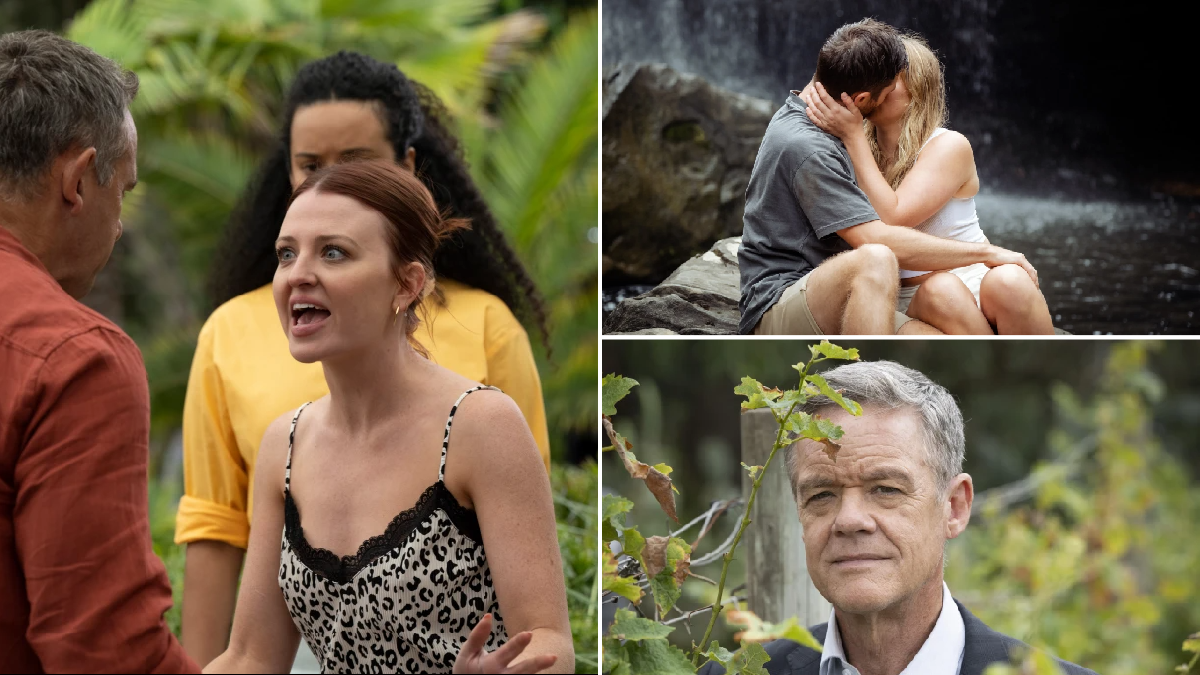 Getting caught out is never a nice feeling, as Ned (Ben Hall) discovers this week in Neighbours. Glen (Richard Huggett) could probably attest to that too given what goes down for him.

It’s all a bit squeaky bum time for a few in the cul-de-sac this week.

After Ned’s fling with Harlow (Jemma Donovan) is shared with the entire neighbourhood, he decides the best thing for him to do is leave. Never mind what this will do to his mother, what about poor Amy (Jacinta Stapleton)? Would he really leave her to raise their baby alone?!

Nic’s (Charlotte Chimes) is on the case in cracking the Glen saga with the truth finally in her grasp. But is she prepared for the Nuclear fallout she’s about to cause?

Paul Robinson (Stefan Dennis) is in for a bombshell of his own when he catches Terese (Rebekah Elmaloglou) in a compromising position.

And Kiri (Gemma Bird Matheson) is left picking up the pieces of her shattered life thanks to Paul and Nic’s meddling.

Here’s what’s ahead in Neighbours.

The proverbial has hit the fan for Ned after the Fashion Week incident told the world that he was having a dalliance with Harlow while Amy pined for him. But now, even though his dirty laundry has aired, he still can’t decide which woman he wants to be with. He turns to Roxy for advice, but ultimately decides the heat in the kitchen has got too much. It’s time to bow out; Ned decides to leave Ramsay Street – and the drama he’s created – behind.

So, Ned decides to flee with his tail between his legs, but little does he know the level of pain he’s leaving in his wake. Amy is shattered by the discovery of what Ned has done and is left feeling physically ill. When the nausea doesn’t subside, she’s hit with a realisation – she’s pregnant. It’s right after this discovery she learns Ned is planning to skip town. Is Amy about to be left to raise a baby alone?

Hendrix is still coming to terms with his recent diagnosis and the one thing he doesn’t need is the Rodwells moving to down as a daily reminder of what he’s facing – it’s down to Sadie that he’s now so ill. He tries to block out the anxiety by turning to his family, but when Wendy Rodwell is at every turn, he can’t take it and reacts.

Nic gets the gold

Nic is on her mission and heads to Mallacoota to track down Glen’s ex to get the goss. Through this little expedition, she learns that he was friends with a couple years ago who had a daughter named Kiri. Bingo. Rubbing her hands with glee, Nic trots straight back to Paul with this information who uses it to pressurise John Wong. Lo and behold, Paul makes John Wong crack and he’s handed the smoking gun he’s after.

What Paul doesn’t realise is that his fixation on helping bring down Glen is ultimately going to come back on him in ways he could never imagine. As the bombshell is dropped that Glen is Kiri’s dad, Glen turns to Terese for support. In turn, as Terese is reeling from the news that Ned is leaving town, she turns to Glen for comfort.

Paul reflects on what he’s done and later has an attack of conscience. He pops over to see Glen to clear the air and walks in on what he would consider an absolute horror scene. There are Glen and Terese, bathed in a post-sex glow. Paul is disgusted; his ex is now sleeping with his brother, and it’s all his own doing. That is one bitter pill to swallow.

Kiri is gobsmacked by the revelation that Glen is her true father. Stunned, she runs straight for Chloe’s supportive embrace. They are well aware the part Nic has had to play in this and she is ostracised for it. As Kiri reels from the shock, she turns to her mum for answers, but little can cure the sense of betrayal. Glen tries to check on her and, on some level, the two connect. But Kiri is also dealing with pure shame at what this has done to her dad Alan. How will she cope with what she now knows?

Much to Hendrix’s chagrin, the Rodwells move onto Ramsay Street. Sadie is understandably concerned at what their new neighbours may think, but mum Wendy shrugs it off. She thinks any bad blood can be cured with a barbecue. But is there a fresh feud in our midst?

Scenes air from Monday May 9 on Channel 5.