Shoppers are not panic buying at the levels seen last year but trolleys continue to be stuffed with more beans, rice, pasta and toilet rolls than before the pandemic with regional households in particular splashing out at the till.

Supermarket sales have fallen since the height of the pandemic in March 2020 but grocery shopping remains at escalated levels when compared to sales two years ago, latest Australian Bureau of Statistics data released on Monday shows. 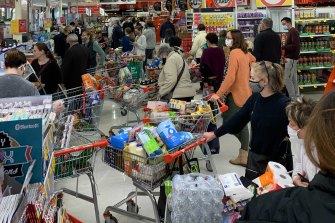 These Sydney shoppers have been outpaced by their regional counterparts.

Sales outside state and territory capitals are particularly high, with experts suggesting an increase in holidaymakers heading to the country, city households relocating to the regions and changing shopping habits could be behind the rise in items being checked out in rural shops.

On an annual basis the majority of regional areas are outpacing their city counterparts in terms of revenue growth.

In Sydney there was a 2.3 per cent decline in supermarket revenue over the year, compared to a 0.5 per cent increase across the rest of NSW. Melbourne’s 0.9 per cent rise was outstripped by a 3.3 per cent increase for regional Victoria. Queensland, Western Australia, South Australia and the Northern Territory recorded the same trend.

BIS Oxford Economics chief Australia economist Sarah Hunter said the figures were “a bit of a puzzle” with the high level of regional activity possibly linked to more people relocating to the country.

Dr Hunter said households being forced to spend more time at home could also be leading to a disproportionately higher spend on non-perishable items in general.

“This could be because people are concerned about being exposed to the disease and so they are still stocking up on pantry items,” she said. “It could also be that some of the products in this category are better substitutes for spending on food that would normally take place outside of the home or they’re treat items.”

AMP Capital chief economist Shane Oliver said it could be a case of households “heading for the hills” reflecting a shift towards more working from home arrangements and a greater focus on lifestyle leading to a “regional renaissance”.

The ABS statistical team said in a statement there was no conclusive or compelling evidence for the reason behind the higher regional supermarket revenue but noted it was “possible that people are more likely holidaying locally and within their own state compared to the same time last year”. Major supermarket operators Woolworths and Coles have previously said shoppers shifted towards fewer but bigger shops as well as more online sales during the pandemic.

Newly released retail data for May has been stronger than expected, with sales rising 0.4 per cent over the month to about $31 billion. This was up 7.7 per cent year-on-year.

EY chief economist Jo Masters said there had been a shift back towards pre-pandemic patterns with spending falling for household goods, clothing and department stores back in favour of services and online shopping.

“Overall retail spending has been strong in the June quarter, averaging 0.8 per cent a month compared to a monthly average of 0.3 per cent through the March quarter,” she said. “Data for June and July will be impacted by lockdowns across the country, which will likely weigh on activity.”

Online retail spending increased 4.8 per cent in May with about $2.7 billion worth of transactions compared to $1.7 billion in May 2019 and $2.9 billion in the same month last year. Online sales peaked in August 2020 at $3.1 billion.

“With much of the country now back in lockdown we may see online sales lift in June and July, as consumers shift back to online methods of sale rather than in person,” Ms Masters said.