The French leader said he knew Mr Morrison lied to him over Australia’s decision to cancel its contract to build submarines in favour of securing nuclear submarine technology from the US and UK under the AUKUS pact. Mr Turnbull said Mr Morrison had lied to him multiple times when they worked together in the Coalition. 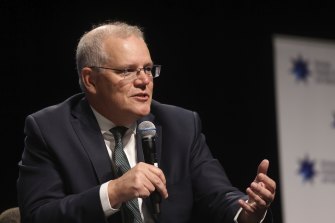 When asked by 3AW radio host Neil Mitchell if he had ever told a lie in public life, Mr Morrison replied: “I don’t believe I have, no. No”

Mr Morrison said anyone in public life copped accusations and he’d learned not to take them personally.

“That’s politics, people take sledges at me all the time,” he said on Friday morning.

“I have learned in public life over a long period of time to not have a thin skin. To not get bitter, to stay focused on the job.

“You’ll get slings and arrows from everywhere… if you haven’t got the thick skin to deal with that then you’re in the wrong job. I tend not to take things personally.”

Mr Morrison said he wasn’t worried about being called a liar over the French submarines deal because he was making the right decisions in the national interest.

“I’m making the decisions to protect Australia’s defence interests. I wasn’t intimidated by the fact it might upset some people,” he said.

The Prime Minister again confirmed the election would be held next year and he would decide early in the year when it would be. He agreed with the idea that the Coalition would start as the underdogs.

“I think that’s where we are now, I think that’s true. That’s not uncommon for incumbent governments. On more than one occasion that’s been the case,” he said.