Regrets? Scott Morrison has a few, the nation learnt on Wednesday as the former prime minister faced an unprecedented parliamentary rebuke over the secret ministries scandal.

The man who until recently commanded the dispatch box as the most powerful person in the land was on the backbench and the back foot, accused of undermining responsible government and Australians’ faith in democracy.

This was not a court of law, but Morrison was undoubtedly on trial.

Speaking in his own defence, Morrison admitted for the first time he had made a mistake by swearing himself into the treasury and home affairs portfolios in 2021.

“I now consider that these decisions in hindsight were unnecessary,” Morrison said.

Wearing a blue, white and black tie – the colours of his local Cronulla Sharks rugby league team – Morrison made a peace offering to the former colleagues he kept in the dark: “I acknowledge that non-disclosure of arrangements has caused unintentional offence and extend an apology to those who were offended.”

Such flashes of self-criticism were striking concessions from a politician who has been famously reluctant to say sorry or concede error.

And they stood in stark contrast to the rest of Morrison’s defiant and at times grandiose speech, a 24-minute oration so operatic it could have been performed in front of a symphony orchestra.

“My government stood up and faced the abyss of uncertainty that our country looked into and the coercion of a regional bully and saw Australia through the storm,” Morrison declared, pointing to his record on the COVID-19 pandemic and attempted intimidation by China.

“I have no intention now of submitting to the political intimidation of this government, using its numbers in this place to impose its retribution on a political opponent.”

Far from a mea culpa, this was an aria sung in the keys of self-justification and self-pity.

The acid-tongued Labor MP Julian Hill described it in real-time on Twitter as a “word salad farrago of lies and nonsense” and “truly bizarre megalomaniac waffle”.

While swearing himself into treasury and home affairs went too far, Morrison stood by his decision to secretly assume authority for the health, finance and resources portfolios.

“I do not resile from these decisions and believe them entirely necessary, mirroring many procedures being implemented in the private sector at the time,” Morrison said.

“I do not apologise for taking action….in a national crisis in order to save lives and to save livelihoods.” 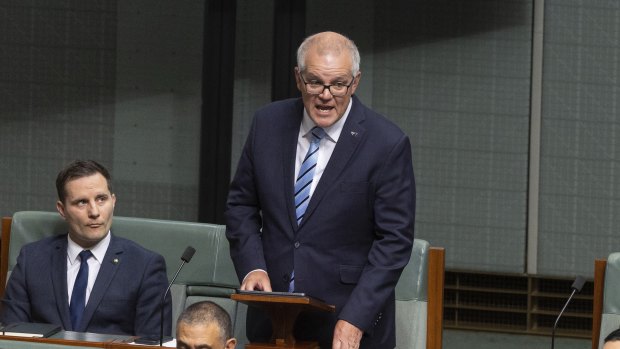 Former prime minister Scott Morrison speaks on the censure motion in the House of Representatives on Wednesday.Credit:Alex Ellinghausen

As for the fact he never informed the public about his ministerial appointments, Morrison implied this was the media’s fault.

“Had I been asked about these matters at the time at the numerous press conferences I held, I would have responded truthfully about the arrangements I had put in place,” he said, to howls of incredulity from Labor MPs.

How any reporter could have had the powers of insight to imagine Morrison was secretly collecting additional portfolio responsibilities remained unaddressed.

The vast majority of Liberal MPs put on a show of solidarity with their former leader: turning up to listen respectfully to Morrison’s speech and walking out as soon as he finished.

Never mind that many of them are on the record castigating him for his multiple ministries; just days earlier it was revealed close ally Alex Hawke had accused him of becoming addicted to executive authority.

Alluding to the biblical instruction that those without sin should cast the first stone, Morrison sought empathy rather judgment.

“Have you ever had to deal with a crisis where the outlook was completely unknown?” he asked.

“In such circumstances, were you able to get all the decisions perfectly right?”

Aware the numbers were against him, the devout Christian vowed not to become embittered: “I will take the instruction of my faith and turn the other cheek.”

Reaching the crescendo of his speech, Morrison’s words took on the timbre of a Frank Sinatra torch song: “I gave it everything I had. I did it to the best of my ability. And in the best of faith each and every day I had the privilege to serve the Australian people.”

Now the record shows he took the blows, becoming the first former prime minister in Australian history to be censured by parliament. No one could deny he did it his way.