Prime Minister Scott Morrison will seek a new commitment from Australia’s global allies to defend a world order that favours freedom over autocracy, warning of a strategic competition with China that parallels the uncertainties of the 1930s.

Naming threats such as military expansion and territorial disputes, Mr Morrison will cite the period of United States leadership after World War II as the “inspiration” for stronger alliances among liberal democracies on security, trade and the recovery from the pandemic. 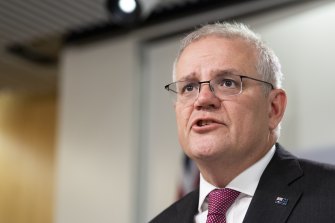 Prime Minister Scott Morrison will reject the idea that strategic competition between the US and China will inevitably lead to war, in a speech ahead of the G7 summit in Cornwall this weekend.Credit:Rhett Wyman

But he will reject the idea that strategic competition between the US and China will inevitably lead to war in a speech ahead of his first face-to-face meeting with US President Joe Biden at the G7 summit in Cornwall this weekend.

While G7 leaders are planning an ambitious pledge on climate change, Mr Morrison will stand apart from other advanced economies by noting the global push to reduce greenhouse gas emissions but without going further on Australian commitments.

Mr Morrison is certain to face calls from G7 leaders for a bigger Australian pledge than its current plan to reduce emissions by 26 to 28 per cent by 2030, well below Mr Biden’s target of 52 per cent and the 78 per cent target set by the summit’s host, British Prime Minister Boris Johnson.

Focusing instead on security, Mr Morrison sets out a foreign policy vision that seeks agreement from liberal democracies to toughen institutions such as the World Trade Organisation, which could help stop the damage to Australia and others from Chinese trade sanctions.

Pointedly turning to the United Kingdom and major European powers with interests in Asia and the Pacific, Mr Morrison will acknowledge the risks in the region from strategic competition with China.

“The task is to manage that competition. Competition does not have to lead to conflict. Nor does competition justify coercion,” he says in a draft of the speech. “Australia stands ready to engage in dialogue with all countries on shared challenges, including China when it is ready to do so.”

Mr Morrison will deliver the speech in Perth on Wednesday before flying to Singapore and on to the UK for the “G7 plus” summit with leaders from the US, UK, Germany, France, Italy, Canada, Japan, South Korea and South Africa.

The Prime Minister will focus on security alliances by citing the turbulence of decades ago, saying the pandemic heightens the need for liberal democracies to defend their values.

“We are living in a time of great uncertainty not seen since the 1930s,” he says in a draft of the speech to the USAsia Centre in Perth, without drawing a direct parallel between the rise of China and the causes of World War II.

“Our challenge is nothing less than to reinforce, renovate and buttress a world order that favours freedom. Meeting this challenge will require a degree of active cooperation among like-minded countries and liberal democracies not seen for 30 years.”

“For inspiration we should look to the years immediately following the Second World War. A world in flux. Competing models for economies and societies. Then, a remarkable generation of far-sighted policy-makers, under American leadership, set out to bring order to this uncertain world; order informed by liberal values and grounded in rules-based institutions. I believe the challenges we face today demand the same commitment and common purpose for this new era.”

Labor leader Anthony Albanese has warned against some of the government’s rhetoric on China in recent weeks, saying Mr Morrison has no long term strategy to deal with China and was seeking a political benefit on national security.

Mr Morrison’s language echoes Mr Biden’s remark in March about “stiff competition” between the US and China, when the US President said he would not allow China to become the wealthiest and most powerful country in the world.

Mr Morrison will emphasise the need for a world order that “favours freedom over autocracy” in global institutions such as the World Trade Organisation, which has been paralysed by disputes between the US and China over appointments to the appellate body meant to rule on disputes.

“The most practical way to address economic coercion is the restoration of the global trading body’s binding dispute settlement system,” Mr Morrison says, reprising an argument he has made for more than two years. “Where there are no consequences for coercive behaviour, there is little incentive for restraint.”

While he does not name Chinese trade barriers to Australian exports such as wine, beef and barley in the draft speech, Mr Morrison will call for WTO reform at a meeting in November.

On defence, Mr Morrison will warn that “accelerating trends are working against our interests” and emphasise the need for the federal government’s $270 billion outlay on defence over the coming decade.

Mr Morrison will also endorse Mr Biden’s recent statement on the need for an inquiry into the origins of the COVID-19 pandemic, a source of friction with the Chinese Communist Party given its criticism of Australia last year for supporting an investigation by the World Health Organisation.

On climate, Mr Morrison makes no change to the stance he has taken for months that Australia would “preferably” reach net zero carbon emissions by 2050, a goal he is tipped to turn into a hard target by the time leaders meet for the United Nations climate summit in Glasgow in early November.

Preparing for a G7 agenda that could see a discussion about phasing out the use of coal, Mr Morrison uses the Perth speech to say nations should be accountable for “charting their own path” to net zero.

“Australia does not support setting sectoral targets or timeframes for decarbonising particular parts of our economy or setting false deadlines for phasing out specific energy sources,” he says.

While Mr Morrison does not mention China’s Belt and Road Initiative, which offers infrastructure funding but comes with Chinese debt and political influence, he calls for a market-based approach with projects backed by liberal democracies.

“Infrastructure that lacks appropriate standards – or that is too expensive, or isn’t environmentally sustainable, or that comes with onerous conditions – just isn’t worth having,” he says.

“Projects should be high-quality – and affordable. They should meet real need, and deliver sustainable economic benefits. And they should not compromise countries’ resilience or sovereignty.”