Schoolgirl, 10, who was given Mason Mount’s shirt breaks down in tears on This Morning as player says her emotional reaction ‘made it a really special night’ for him in video message

The schoolgirl who melted the hearts of the nation after England’s Mason Mount gave her his Three Lions shirt was left in tears of joy once again after receiving a special message from the player today.

Belle McNally, 10, sobbed uncontrollably after Mount walked off the pitch and into Wembley Stadium and handed her his jersey following his side’s extra-time win over Denmark in the Euro semi-final on Wednesday.

An adorable clip of the child model and aspiring actress turning around and crying into the shoulder of her father was originally shared to Facebook by another fan and has now been viewed more than two million times.

Appearing on This Morning today with dad Tom McNally, Belle was left tearing up once again when the player sent a video message thanking her for her unwavering support, and said that her reaction to the gift made his win all the more special. 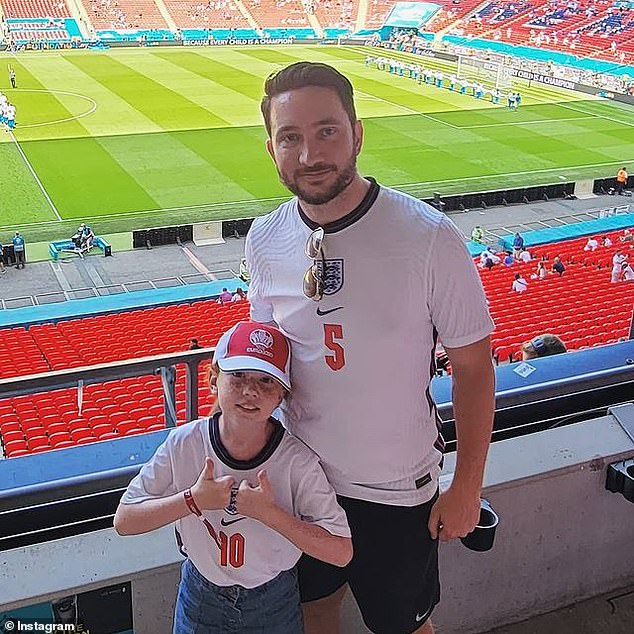 Belle McNally, 10, pictured with dad Tom McNally at Wembley Stadium, melted the hearts of the nation after England’s Mason Mount gave her his Three Lions shirt on Wednesday 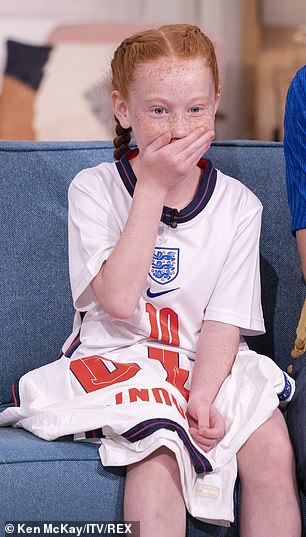 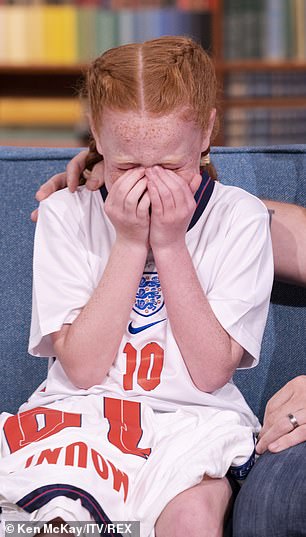 Appearing on This Morning today with dad Tom McNally, Belle was left tearing up once again when the player thanked her in a video message for her unwavering support 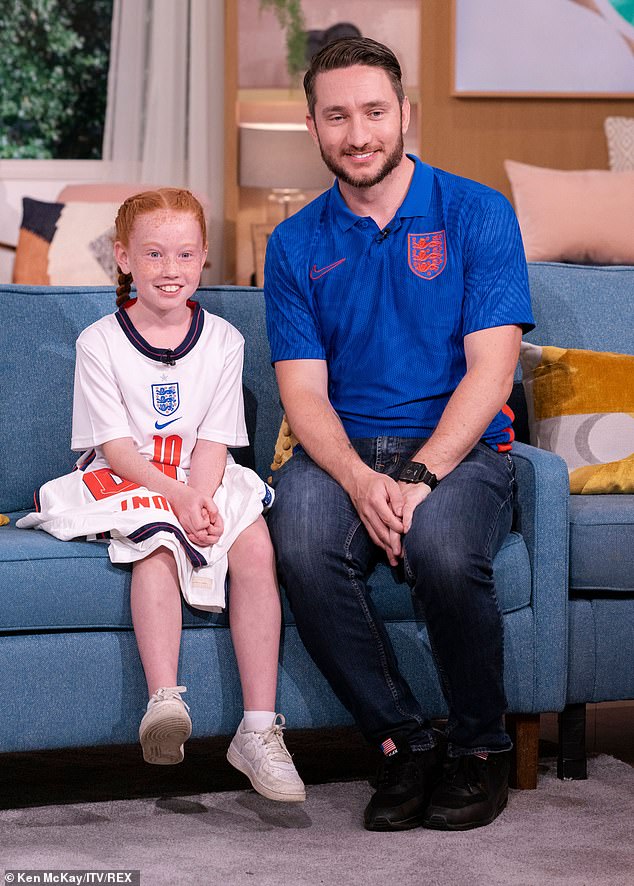 Mount said in the video: ‘Belle, It’s Mason here, I just wanted to do this message to you and say how special the reaction was after the game when I gave you my shirt.

‘Obviously we won the game and that was a big achievement, but that really topped it off for me and made it a special night for me. Thank you for your support, it really means a lot and hopefully see you Sunday’.

Sports choreographer Tom added: ‘Thank you so much Mason. You can’t put into words what he has done for her, such a nice man’.

The young football fan plays as striker for Glebe FC while also working as a model for top labels including Burberry, and went to watch her first football match last month. 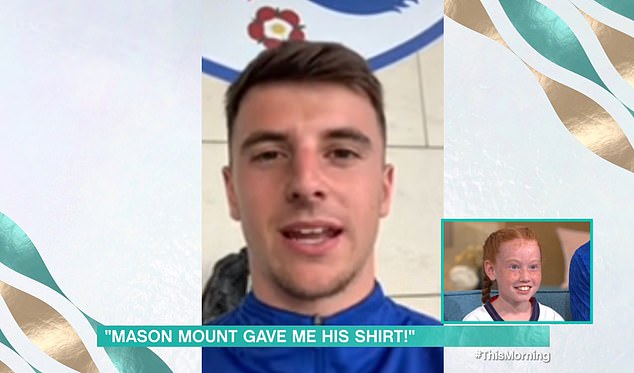 In the special video message, the England player said that her reaction to the gift made his win all the more special 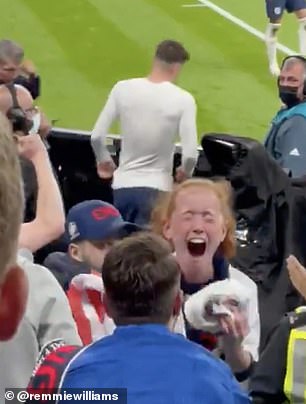 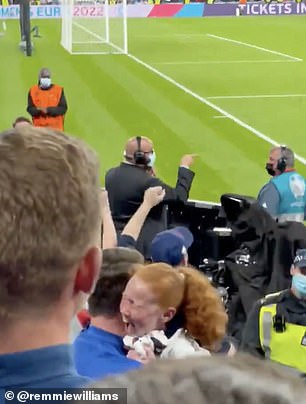 She believes Mount may have recognised her from an encounter on a motorway on the way to the game, when she and her father saw the bus team on its way to Wembley for the Group D opener against Croatia.

Belle explained: ‘So when we went to the England v Croatia game, we actually saw him on the Euros coach and he waved and smiled at me. So I think maybe he recognised me from there at the game.’

Tom went on: ‘We were on the motorway and the police blockaded the whole motorway and we saw the England bus, we drove alongside it.

‘It was her first football game ever and she says she saw Mason wave at her and that sort of moment, a sort of great romantic story, her first game, this happening it’s like a book or film you couldn’t make it up.’ 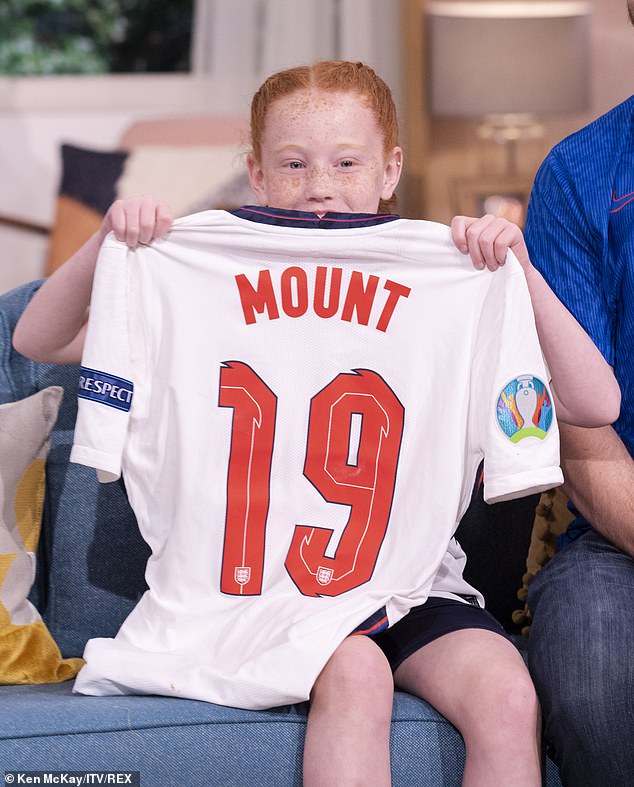 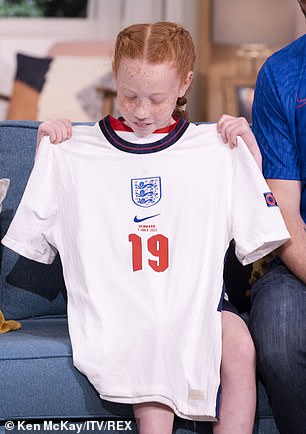 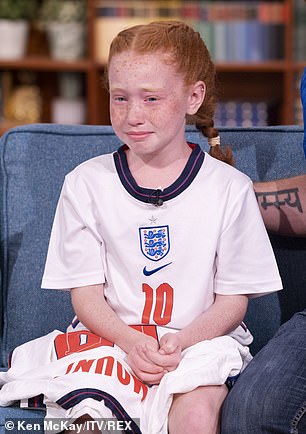 Belle proudly showed off the Three Lions shirt she had been given, and was left in tears as Mason told her that their interaction made his win all the more special 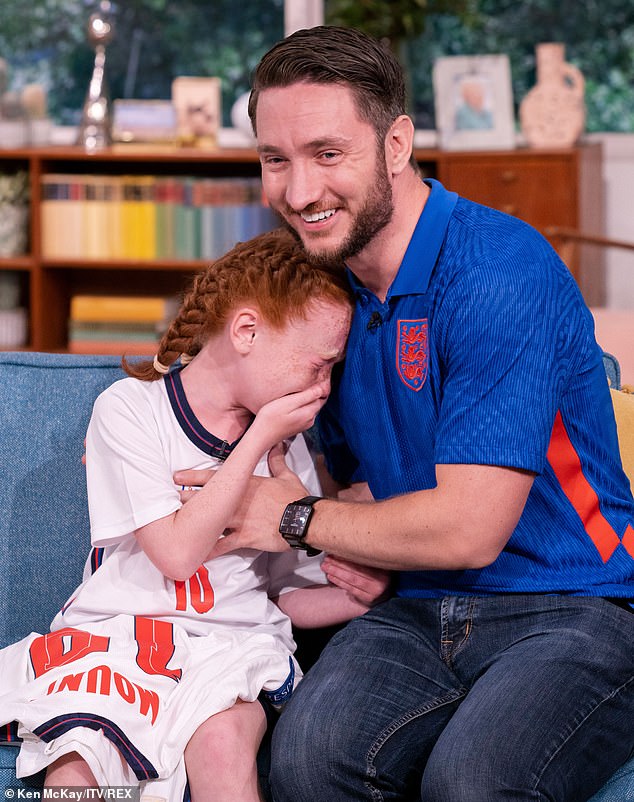 Belle was seen cuddling her father and crying once again, as she did when she was first gifted the football shirt from Mount

Belle had no idea that Mount was planning on handing her the shirt, and says she was overjoyed and shocked when she realised what was happening.

‘So when he walked towards me, in the moment I thought he was looking a different way’, said Belle. ‘But looking back he actually looked at me, so in the moment I didn’t think he was going to give it to me. 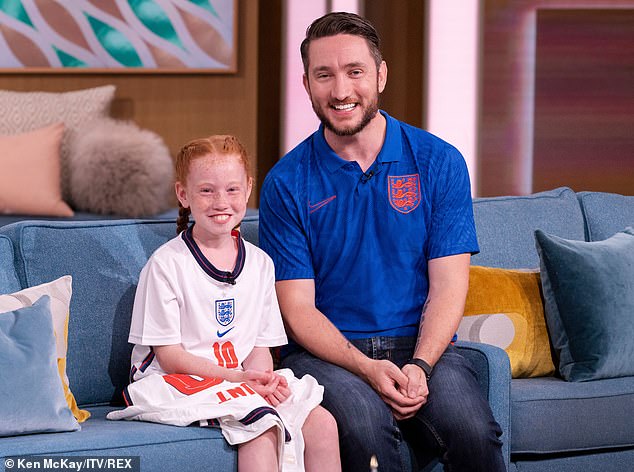 She plans to have the shirt framed and put on her bedroom wall, and said she received an overwhelmingly positive reaction from fellow England fans 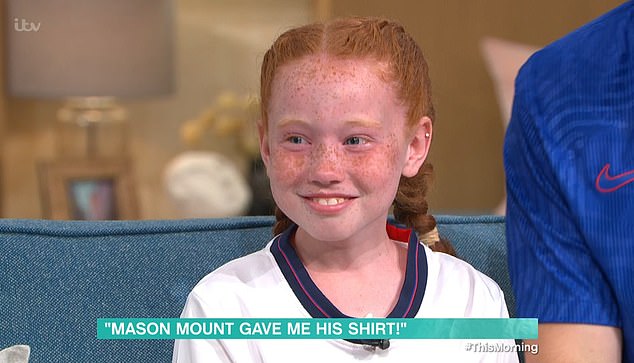 Belle had no idea that Mount was planning on handing her the shirt, and says she was overjoyed and shocked when she realised what was happening

Belle plans to have the shirt framed and put on her bedroom wall, and said she received an overwhelmingly positive reaction from fellow England fans.

‘Many people came up to me and high-fived me as I was trying to walk back up the stairs’, she said.

Her father, a sports choreographer who has worked with Premier League clubs and whose £1.25million Bromley mansion made headlines earlier this year, said that his daughter is on ‘Cloud Nine and hasn’t taken the shirt off since he gave it to her’. 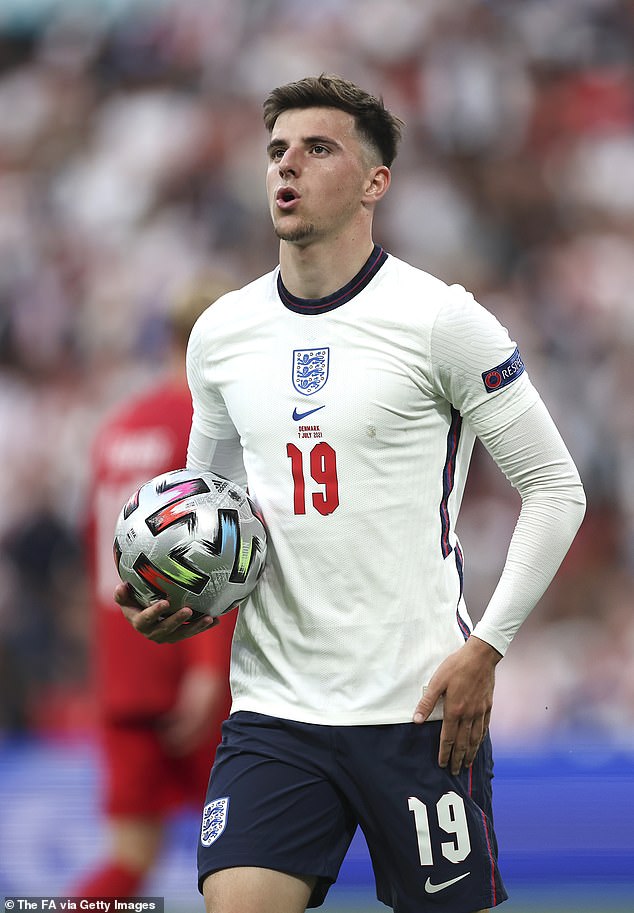 Speaking on ITV today, he said: ‘I have loved football from a young age. Slowly I have introduced Belle to football and she has fallen in love with football.

‘So for me as a father to see that happen was a dream come true, honestly the greatest day you can imagine.’

Speaking after the game, Mount said it marked a ‘special moment’ for him as well and said ‘to see reaction from Belle topped it off for me. That level of support really means a lot’.

The aspiring actress revealed she had ‘bunked off’ school to make the trip to Wembley and wrote on social media: ‘Had the best day ever at Wembley. Thank you Mason Mount.’