The fact that she played the cello may be the reason Holocaust survivor Anita Lasker-Wallfisch is alive today, she says, as she recounts her experiences at the heart of one of the worst genocides in history.

As 60 Minutes reported Sunday in “The Lost Music,” Lasker-Wallfisch was sent to Auschwitz concentration camp in 1943, when she was just 18. Having lost her parents, German-Jews, a year before, Lasker-Wallfisch was familiar with what happened in Auschwitz, though she tried not to believe it. What she didn’t know was that a slip of the tongue in mentioning that she played the cello would induct her into the Women’s Orchestra at Auschwitz, and ultimately save her life.

“I was led to a girl…she asked me what was I doing before the war. And like an idiot, I don’t know, I said ‘I used to play the cello,'” Lasker-Wallfisch recalls. “She said ‘that’s fantastic. You’ll be saved.’ I had no idea what she was talking about….[but] that was my salvation.”

“You arrive in Auschwitz, you’re prepared to go to the gas chamber. Somebody puts a cello in your hand, and you have a chance at life.”

Lasker-Wallfisch lived with other musicians in wooden barracks known as the Music Block in Birkenau; she performed with them, much of the time near the crematoria, where they could see the smoke and “everything that was going on. And though the women performing were of different nationalities, and often couldn’t understand each other, they shared a common purpose: to play marches for prisoners and to entertain SS guards.

Though the monotonous “zombie”-like existence of performing for those who were destined to die, and those who were working to kill was difficult, Anita says knowing how to play music “was like a gift of the perhaps tomorrow.”

“You arrive in Auschwitz, you’re prepared to go to the gas chamber,” she says. “Somebody puts a cello in your hand, and you have a chance at life.” 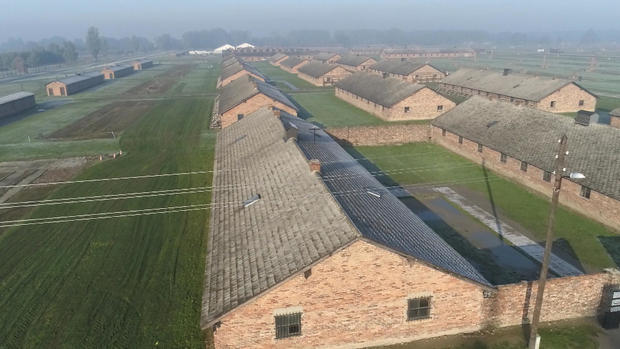 Lasker-Wallfisch also credits her survival to the fact that she was brought into the concentration camp as a criminal rather than a Jew. She was caught forging illegal papers for French laborers to cross back into France with her sister.  As Anita says, it was “much better to be a criminal than a Jew… criminals get a court case.”

Lasker-Wallfisch was later transferred to Bergen-Belsen, another Nazi camp, before the Allies liberated the camp in 1945. She went on to serve as a witness in the Luneberg trial, where 11 SS guards were sentenced to death by hanging. Anita eventually moved to London and became a founding member of the English Chamber Orchestra. Today, she speaks to audiences about the atrocities committed against her and so many others during the Holocaust. She believes hearing her first-hand account can bring home the horrors that she experienced and witnessed in a way history books can’t.

As for the role of music in her life, Lasker-Wallfisch only has to point to her “musical family” to display the power and indestructibility of music. Lasker-Wallfisch says,”Hitler destroyed endless things, but music… you can’t destroy it.”

The video above was edited by Will Croxton.