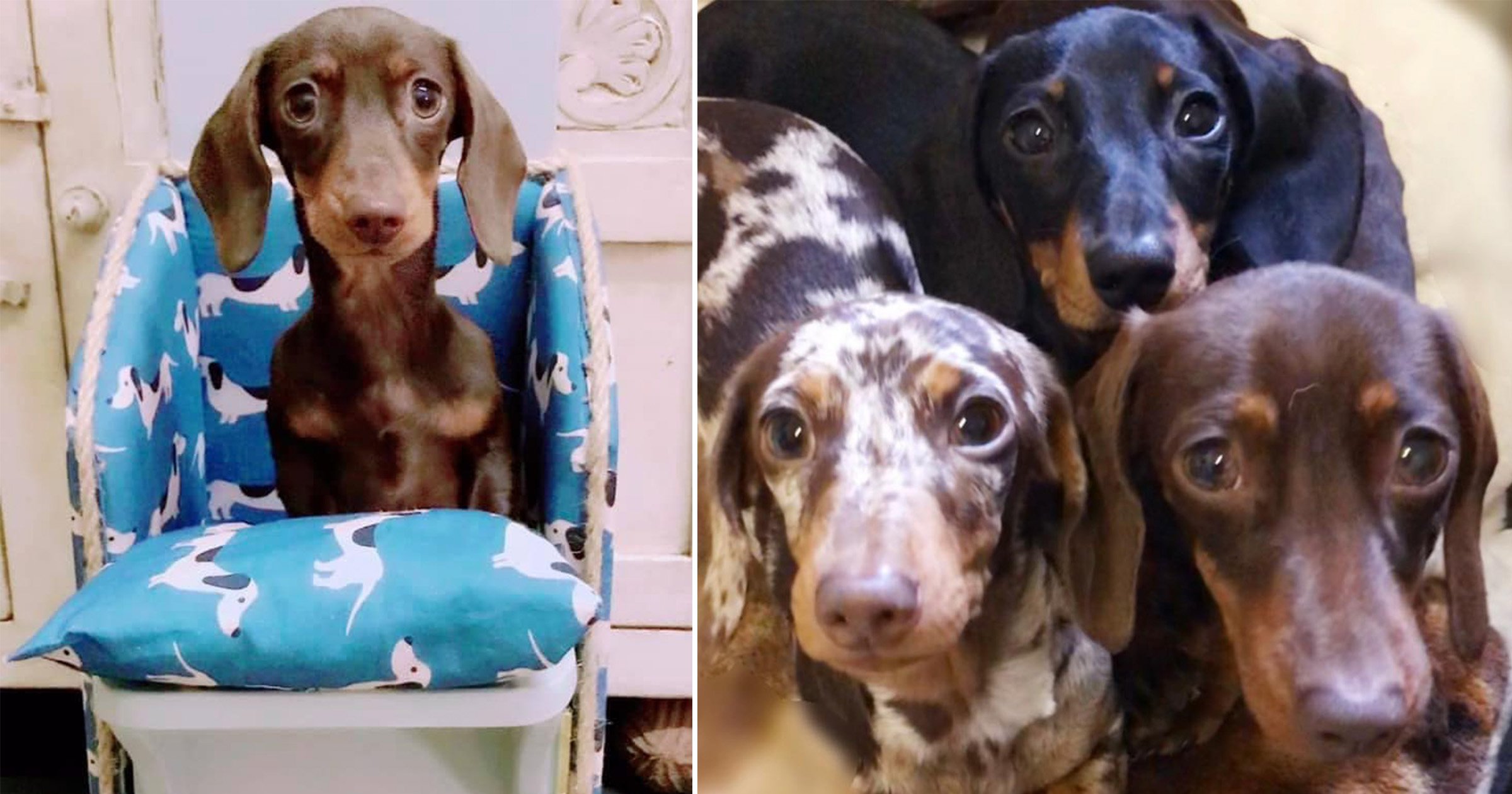 An exceedingly cute pair of sausage dogs need to be fed by their owner in high chairs because of a rare condition they’ll have their whole lives.

Sarah Bache, 49, can spend as many as four hours a day feeding miniature daschunds Doris and Cinders, who both have a disorder that makes it hard for them to eat normally.

Their wooden high chairs give them the sport they need to enjoy their meals.

Sarah, from Teesside, has was advised to put down the two dogs and River – who has the same illness but in a more mild form – but refused, and hopes to spread awareness that dogs with their condition can still live a happy life.

Sarah, who doesn’t currently work, said: ‘I was advised to euthanise all three of them when they were each diagnosed because of the care, patience and dedication it takes.

‘But I was very ready to take on that challenge of caring for them. There was no way I would give up on them.

‘Unfortunately, the disorder doesn’t allow them to do a lot of normal doggy things.

‘Barking can make them regurgitate, they can’t have direct fluid, and I have to sleep with Doris on pillows and sit up all night. Any regurgitation can cause pneumonia.

‘It can happen at any age to any dog breed, but it’s really not a death sentence and I want others to know that.

‘All three of them are loving and happy sausage dogs, who aren’t held back by their illness.’

The condition, called megaesophagus, was spotted in all three dogs when they were puppies.

The condition sees the esophagus get larger and lose its ability to move food into the stomach, making it hard for the dogs to eat normally.

Sarah says megaesophagus is congenital and there is no known reason why dogs can get it.

Sarah said: ‘When we got Doris as a puppy, she was doing really well until a few weeks later when she stopped breathing, which led to the diagnosis.

‘Doris was quite thin when she was sick, and I was told she likely wouldn’t live longer than a year.

‘The three of them have different extremities of megaesophagus – Doris has it the worst, Cinders is in the middle as she can have more of a relaxed diet and River’s is very mild, and he doesn’t need a chair.’

It’s advised that dogs with megaesophagus eat in a special high chair, called a Bailey chair, which helps them sit upright in order to digest their food.

Sarah said: ‘Doris has to have her food in a certain way, we call it a milkshake because we blend home-cooked food such as steak mince, broccoli and ground up kibble.

‘She also has some medicine every day, including a form of Viagra which relaxes her body to allow food to move through easier. It’s really effective.

‘I hold Doris up for three hours a day, and Cinders can eat a raw diet in her chair, so I have her upright for 45 minutes in total a day. River eats normally and rarely has any regurgitation.’

Sarah, who has ten dogs in total, regularly posts photos of the sausage dog trio on their Facebook page, which has earned more than 15,000 followers.

Sometimes, Sarah says people misunderstand the high chairs, thinking the dogs are being spoiled or mistreated.

Sarah said: ‘When I share photos of my dogs in the chairs, sometimes people think I’m pampering them and that it’s cute or cruel, but I have to make them aware that it’s a feeding aid.

Sarah hopes that, through their social media pages, she can spread awareness of megaesophagus in dogs.

She said: ‘A lot of people praise me for my dedication to my dogs which is nice.

‘I’ve always taken in and rescued ill, elderly or lonely animals because I can’t bear to see them in distress. I think it’s just who I am.

‘I’ve helped many people who have dogs with megaesophagus so the Facebook page has worked really well as an educational tool.

‘It’s also a way that I can show my dogs still live a happy life and they aren’t held back by their condition.

‘Doris especially is so strong and has surpassed vets expectations. I’m very proud of her.

‘It’s an honour to be able to support people through their dog’s diagnosis.’