SARAH VINE: Packing up my home, our absent Queen and why life will never be the same again… Her Majesty’s absence yesterday brought the painful realisation that she is nearing the end of her great reign

There are times in life when reality hits you like a freight train.

For me, it’s been the process of packing up the family home — the final, physical expression of the end of 20 years of marriage.

Echoes of the past drift like dustballs across the empty living-room floor; a forgotten photograph stirs memories of happier times.

It is both painful and cathartic, a letting go of something that once represented the core of my existence — but also a new beginning, the start of the next chapter.

I mention all this not in a bid for sympathy, but because it’s the best way I can find of expressing how I feel about the Queen.

Her absence yesterday at the State Opening of Parliament — just a small and woefully inadequate side table bearing the crown in her place — was the graphic, painful realisation of a sad but inevitable truth: she is nearing the end of her great reign.

It is a moment we all knew would eventually come, yet somehow hoped it never would.

This is irrational, of course. Her Majesty is 96 — how can she possibly be expected to continue with her official duties? The fact that she has only very recently scaled back is astonishing. 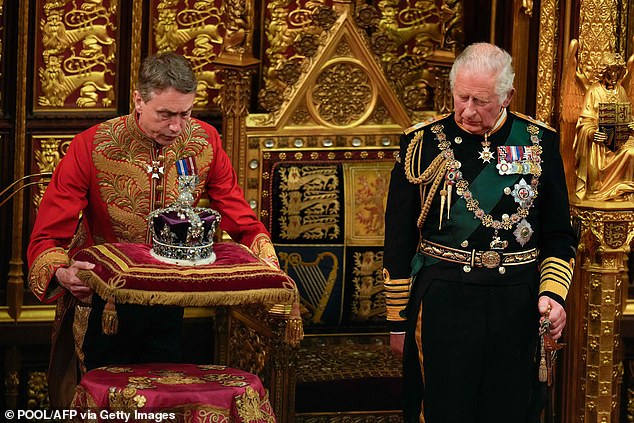 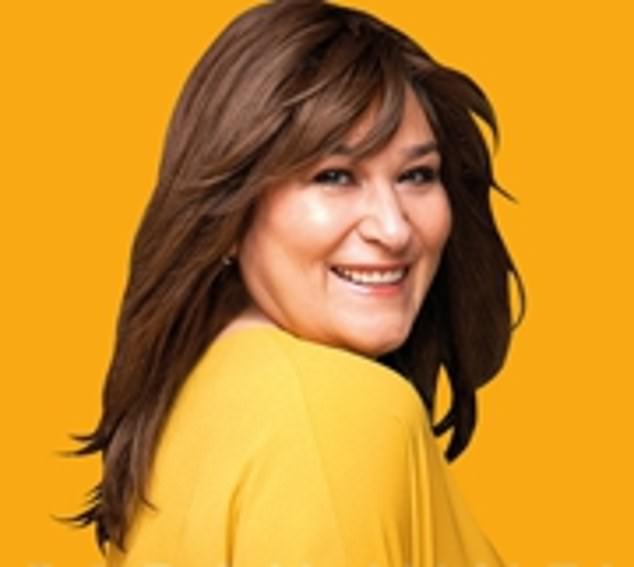 To be blessed with such an extraordinary individual as monarch is, I am sure, one of the reasons this small island of ours has remained such a great nation

Such has been her resilience, her determination — even after the death of her beloved husband — that at times it has seemed she might go on for ever. But no one can cheat time, not even a Queen.

I’ve attended a few State Openings, and they are a truly momentous spectacle. A bit pompous in parts, as are all such ceremonies, but they form the bedrock of British society and remind us of our history and of who we are.

The role of the monarch in all of that is central, and so the Queen’s absence — and perhaps just as significantly the presence of Prince Charles — is hugely symbolic.

He performed his duty admirably. But it felt so odd to hear anything other than her rather prim tones echoing through the Chamber, to see those watchful eyes — often sparkling with what seems like a private joke — replaced by the rather more hang-dog countenance of her son.

Quite simply, generations of Britons have never known life without her.

For almost three-quarters of a century, she has been one of the few certainties in an age of astonishing social and cultural upheaval.

Her constancy, her wisdom, her quiet humour, her clarity of purpose: they’ve guided us through the best and worst of times.

But she is so much more than just an institution.

On a human level, she connects better with ordinary people than many of the so-called ‘modern’ royals, such as the Duke and Duchess of Sussex.

She is authentic in a way they are not. And while they expect everything in return for almost nothing, she’s demanded very little in exchange for a lifetime’s service.

For a woman who was practically a girl when she ascended to the throne, she has always kept her feet on the ground, her sense of entitlement in inverse proportion to her status. She’s spent her life surrounded by drama queens — from her own sister, Margaret, to Princess Diana — yet has never thrown her toys out of the pram. 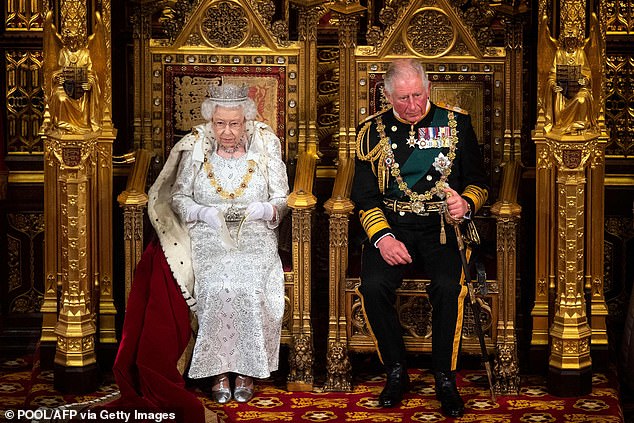 She has dealt with death, divorce, disaster; and while all around her have sought excuses to justify their failings, she’s always accepted responsibility for her actions, as well as the mistakes of others.

To be blessed with such an extraordinary individual as monarch is, I am sure, one of the reasons this small island of ours has remained such a great nation.

She has been our compass, our guide, our one true anchor. I am sure, in time, we will get used to her absences.

But life will never be the same.

I adore the belle of Bridgerton

Nicola Coughlan, star of Bridgerton and Derry Girls, looked absolutely stunning at the Baftas in a violet Valentino gown.

There is something so lifeaffirming about this young woman — a brilliant, vibrant talent who physically defies the stereotype of the successful young actress.

I just wish there were more like her: beautiful and confident, but also so much easier to relate to than your common-or-garden half-starved waif. 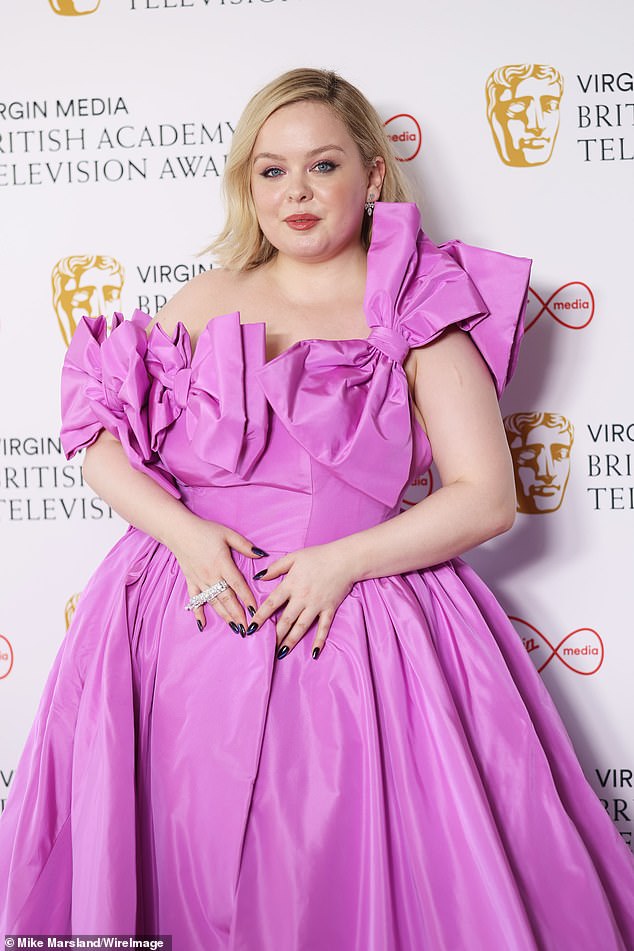 On purely sartorial grounds, Ncuti Gatwa seems perfect for the role of Doctor Who. Timelords have often been eccentric dressers — from Jon Pertwee’s velvet and frills to Tom Baker’s iconic scarf and Peter Davison’s cricket-themed wardrobe.

Judging by his outfit at this year’s Baftas, Gatwa looks set to outdo them all — that’s if anyone’s actually watching. 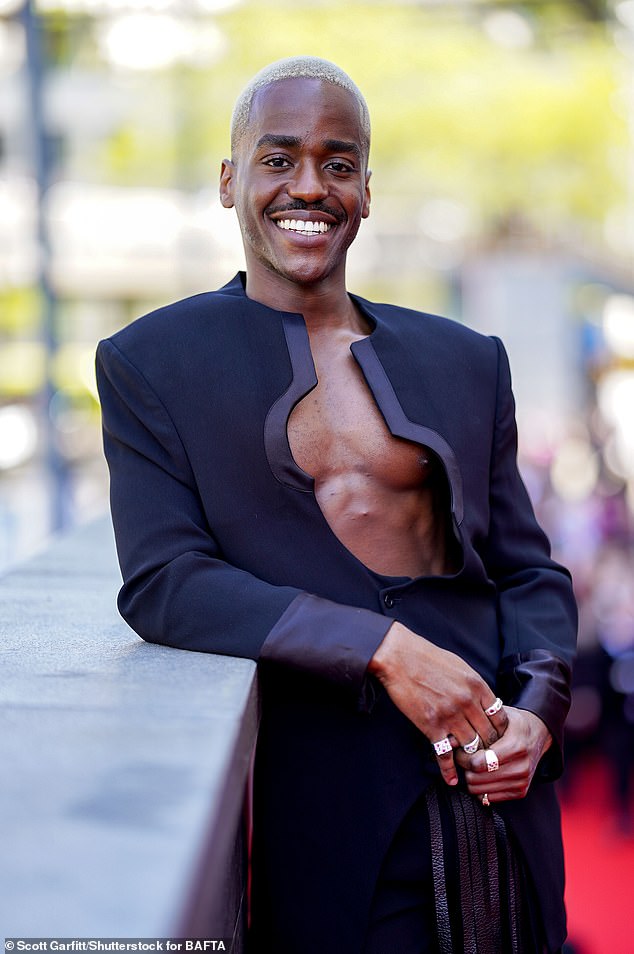 Keir Starmer’s 8.40pm ‘dinner with Mary Foy’, the local MP for the City of Durham, is pure Islington Labour. No wonder the Red Wall collapsed!

Sir Keir Starmer, by contrast, did nothing throughout Covid except preach from the sidelines, criticising and sniping.

So what’s his excuse?

In his latest attention-seeking stunt, Prince Harry turns his hand to comedy acting, with mixed results.

One is tempted to say: ‘Don’t give up the day job.’ Only, of course, it’s too late for that.

So far the only truth that seems to have emerged from the Wagatha Christie trial — sparked by Coleen Rooney accusing Rebekah Vardy of leaking stories about her to the Press — is how low-rent they are.

Remove the money and flash lawyers, and they might as well be brawling in Wetherspoons.

‘A cow cycles every three weeks, like a person,’ Countryfile’s Adam Henson informed viewers on Sunday, prompting Sharron Davies, former Olympic swimmer, to tweet: ‘People don’t have monthly cycles, BBC, females do . . .’ As both a woman and a (grumpy) old cow, I couldn’t agree more.

Young couples hoping to start a family are increasingly opting for IVF because they’re ‘too busy’ for sex.

Thus does the human race come to an end — not with a bang, but with a never-ending to-do list.

What with HRT rationing and the shortage of hay fever tablets, very soon I am going to be nothing more than a snivelling, sweating wreck.

Why is the BBC wasting money (£50 million) on market research about what viewers like to watch when it has all the data it needs at its fingertips via the iPlayer?

Talk about being an analogue organisation in a digital world.