In 2019, I think we should all resolve to be kinder, gentler, less dramatic versions of ourselves — starting with Samantha Markle. The Duchess of Sussex, Meghan Markle, has been dealing with so much unnecessary drama from her half-sister Samantha for the entirety of 2018 and it looks like there are no signs of it slowing down in the New Year. Samantha Markle has been writing letters to Meghan in the press as of late and just added a list of suggested New Year resolutions for her royal sis, too. Samantha Markle’s list of New Year resolutions for Meghan is so, so shady and rude. It’s like we get it, Samantha. You’re grumpy as hell that your sister is a famous royal now. Understood. Message received loud and clear. Stop now, please.

If you aren’t following Samantha and her onslaught of negativity, I don’t blame you. To bring you up to speed, she most recently shared a photo of her Christmas Card to Meghan with The Mirror to publish. The message was less about wishing Meghan a merry Christmas and more about guilting-tripping her for "ignoring" their father Thomas Markle’s efforts to get in touch. After Meghan was photographed going to Christmas church service with the Duke and Duchess of Cambridge, Prince William and Kate Middleton, Samantha took her "Merry Christmas" back and called Meghan rude, hurtful, and heartless, according to screenshots captured by her followers. In one tweet, Samantha said, "How dare you walk into a church." 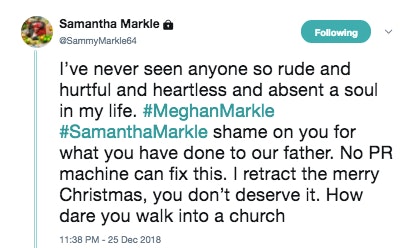 Apparently, while the rest of us were enjoying our families and ringing in the New Year over the holiday, Samantha was busy at work crafting a list of resolutions for Meghan. This time, she shared her note to Meghan with a different British tabloid, the Daily Star, in hopes that her famous sister might see it. (Or maybe just for attention. Whatever.) This is what the note said:

Elite Daily reached out to Kensington Palace for comment on some of Samantha’s implications regarding Meghan’s relationship with their father, but did not hear back by the time of publication.

The Daily Star also reported Samantha told them she plans to release "a shocking tell-all book" called In the Shadows of the Duchess around Meghan’s due date sometime this spring.

Meanwhile, Meghan’s dad maintains that his daughter is "ghosting" him.

Clearly, Meghan and Harry have made the decision to move forward building their own happy family and Samantha’s efforts to contact the tabloids to gain her sister’s attention seem as futile as they are misguided.

Samantha, I recommend you resolve to relax already and try to get back to living your own life. It’ll be better for everyone.