Rita Houston, a big-hearted disc jockey with an intoxicating voice who championed artists like Brandi Carlile, Mumford & Sons, Adele, the Indigo Girls and Gomez at the widely followed WFUV-FM in the Bronx, died on Dec. 15 at her home in Valley Cottage, N.Y. She was 59.

Laura Fedele, her wife, said the cause was ovarian cancer.

Since 2012, Ms. Houston had been program director at WFUV, a listener-supported station licensed to Fordham University. She was also perhaps its best-known personality, hosting a popular Friday night show, “The Whole Wide World,” which was her vehicle for updating the station’s sound, balancing a new mix of indie rock, world music, hip-hop and electronica with the more familiar one of folk, rock and blues.

“Rita could pull together all those things and make you feel, ‘Wow what a big world of music there is here,’” Chuck Singleton, WFUV’s general manager, said in a phone interview.

“In her music she contained multitudes,” he added.

Ms. Houston was also the impresario of in-studio performances — by Tom Jones, Adele and Emmylou Harris, among many others — and musical events in Manhattan at venues like the Bottom Line and the Beacon Theater as well as on the High Line, the elevated park.

“I’m a singer girl, I’m a vocal girl, I don’t like when people don’t sing,” she told the musician-artist Joseph Arthur in March on his podcast, “Come to Where I’m From.” “I don’t want everything to sound like Ella Fitzgerald, but I just love a good voice.”

One of those was Ms. Carlile’s, the folk and Americana singer-songwriter who credits Ms. Houston with giving her music its first airplay as well as the confidence to talk publicly about being a lesbian.

In a remembrance on Facebook, Ms. Carlile wrote, “‘Is that your plus one?’ Rita Houston said to 22-year-old me as a picture of my girlfriend accidentally popped up on my cellphone screen.”

Ms. Houston, sensing Ms. Carlile’s uneasiness at confiding to people in the music industry that she was gay, had persuaded her to open up.

“I don’t know what it’s like where you’re from, but this is N.Y.C.,” Ms. Carlile recalled Ms. Houston telling her. “We’re going lesbian karaoke singing right now. Do a shot of tequila and get your coat.”

Ms. Houston’s recognition of the Indigo Girls had a significant impact on their career as well.

“You knew you were doing something right if she played your songs,” Amy Ray, a member of that folk duo, said in an interview. “And she was one of those people we weren’t afraid to be ourselves and be queer with. We could be who we were. She gave us a lot of bravery.”

Since earlier this year, Ms. Houston had guided a station initiative, called EQFM, to put more female artists on the air.

“WFUV is on the right side of this issue, but we acknowledge there was more work we can do,” she told AllAccess.com, a radio industry news website. “For example, our music mix is 35 percent female-coded. That is higher than most but needs to be at 50 percent for true parity.”

She added: “Good songs come from everywhere, across race, age and gender. Good radio should celebrate that, without bias.” 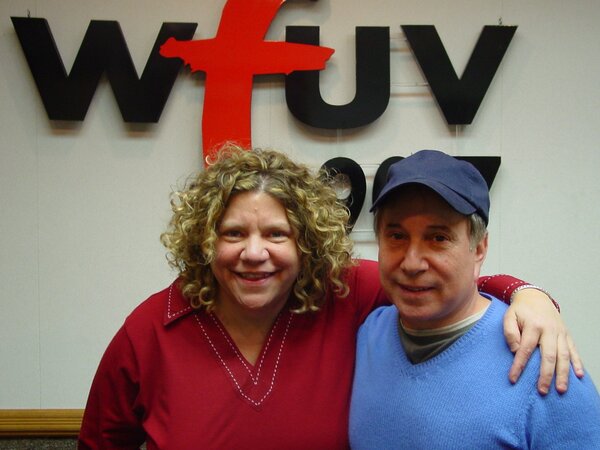 Rita Ann Houston was born on Sept. 28, 1961, in White Plains, N.Y., and grew up in nearby Mount Vernon. Her father, William, was a home heating oil company executive. Her mother, Rita (Paone) Houston, was a waitress.

Ms. Houston majored in urban studies at Hobart and William Smith Colleges, in Geneva, N.Y., but was expelled for tripping fire alarms and tipping over vending machines. “I went out big,” she told Mr. Arthur on his podcast. “I was in the wrong place.”

She worked as a waitress before finding work as a D.J. at Westchester Community College’s radio station, then at another station in Mount Kisco, N.Y., for $7 an hour. She left for a job at ABC Radio as an engineer, and worked with the sports journalist Howard Cosell and the talk show host Sally Jessy Raphael. The pay was far better than her low-wage radio jobs, but she missed being on the air. In 1989 she was back behind a microphone at WZFM in White Plains.

“Someone said to me, ‘I want to introduce you to the voice of God,’” said Paul Cavalconte, who, as the WZFM program director, hired Ms. Houston. “She was so engaging and charismatic, which worked on the radio and in personal appearances.” (WZFM is now WXPK.)

When WZFM’s format shifted from adult album alternative to modern rock in 1993, Ms. Houston was told that she had to adopt on-air name with an X in it. She became Harley Foxx. But, seeking more diversity in the format, she sought refuge a year later at WFUV, of which she had been a fan for some time.

“I just called the station and was, like, ‘Hey, can I work here, please?’” she told Mr. Arthur.

She started hosting the midday show in 1994, then stepped away from it after a few years to become the full-time music director. She returned to the air in 2001 to host “The Whole Wide World.”

In addition to her wife, she is survived by her sister, Debra Baglio, and her brothers, Richard and Robert. Another brother, William Jr., died in October.

Ms. Houston recorded her final show from home on Dec. 5, with Mr. Cavalconte, also a D.J. at WFUV, as the co-host. It was broadcast three days after she died.

“She was short of breath and aware that her voice was not strong,” said Ms. Fedele, who is the station’s new media director. “I nagged her for a couple of days, I wanted her to think about the playlist. Finally, she asked me to get a pen, and she just reeled off 30 songs.”

Her playlist was a distillation of the genres that she had brought to her show and the station. She opened with James Brown (“Night Train”), moved on to artists like Deee-Lite (“Groove is in the Heart”), Emmylou Harris (“Red Dirt Girl"), Los Amigos Invisibles (“Cuchi Cuchi”), LCD Soundsystem (“New York I Love You, But You’re Bringing Me Down”) and David Bowie (“Station to Station”).

The finale was the Waterboys’ “In My Time on Earth,” which the group performed last year at a WFUV event at Rockwood Music Hall in Manhattan.

Given the time she had left, the song resonated with her.