Easter is meant to be a time of reflection, so let’s spare a thought for poor old Rihanna and A$AP Rocky.

While you were busy hunting eggs, kneeling in church or sunning yourself on the beach this long weekend, one of the shiniest couples in pop culture was enduring a passion play not of their own making. To cut a long story short, their relationship was crucified by the gossip mill on Friday and mourned on Saturday, before rising again on Sunday.

Say what? Who did what to Rihanna?!
Robyn Rihanna Fenty – known to all and sundry simply as Rihanna – is the 34-year-old Barbados-born singer behind monster hits including Umbrella, Work and FourFiveSeconds (with Kanye West and Paul McCartney). Despite having not released an album since 2016, her fortune has been estimated by Forbes at $US1.7 billion ($2.3 billion) – largely due to her non-musical activities. 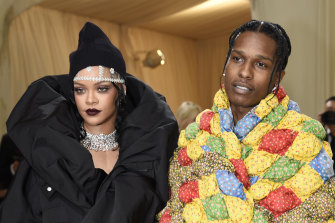 Trash talking: The internet lit up over Easter with rumours that Rihanna, left, and ASAP Rocky – who are expecting their first child together – had split up.

In 2017 she signed a $US10 million deal with French luxury goods company LVMH, which owns Louis Vuitton, Moet Hennessy, Christian Dior, Kenzo and many others, to launch cosmetics brand Fenty Beauty. Its key point of difference was a range of shades designed to cater to all shades of skin (at the time, a seriously innovative move); in 2020, it turned over more than $US550 million. In 2018, she and LVMH launched lingerie brand Savage X Fenty. An equity raising in February 2021 valued it at more than $US1 billion.

Away from business, since November 2020 Rihanna has been dating A$AP Rocky – aka Rakim Mayers – a 33-year-old rapper from Harlem, New York, who is also considered a leading light in fashion. In January, the couple announced – in the way such couples announce such things, which is to say via a series of stylishly framed images on social media – that they were expecting a child. Her pregnancy has played out on social media as a sustained campaign of body-positive imagery (in which her own lingerie line features prominently).

Last week, however, the internet blew up with rumours that the relationship was over because Rocky had been cheating with Amina Muaddi, a shoe designer who has worked with Rihanna’s Fenty label.

Who started this rumour?
An American in Paris. No, not Gene Kelly, but a 31-year-old fashion blogger called Louis Pisano. They have 130,000 followers on Instagram and more than 21,000 on Twitter, which is more than enough to get noticed when spreading trash talk. Within minutes of Pisano posting on social media on Friday that the pair had broken up, the rumour was being repeated, and in some cases reported as fact, all over the internet.

So, is it true or not? (And honestly, I can’t even believe I’m asking.)
By all accounts, no. Rihanna and Rocky have kept a dignified silence, and photos – seemingly fresh – appeared over the weekend of the pair in Barbados. Muaddi dismissed the “fake gossip” on an Instagram story, saying it had been created “with malicious intent”. And Pisano took to Twitter on Saturday to apologise for their “dumb decision to tweet some information I received”, vowing to stay off the platform until they had worked out how to use it “for more positive work”.

This is all just celebrity gossip. Why does any of it matter?
In a sense it doesn’t. But the fact such a nasty rumour circulated like wildfire at a moment when the people in question ought to have been luxuriating in the last weeks of Rihanna’s pregnancy does serve as a useful reminder that for all their wealth, fame and eager courting of the spotlight, celebrities are still people, with feelings, vulnerabilities and capacity for doubt and suspicion. World’s smallest violin and all that, but a little compassion wouldn’t go astray.

Why do people lap this stuff up?

There are so many ways to answer that. Because we have an insatiable appetite to share gossip (unconfirmed rumours), whether it’s about relationships, political manoeuvres, sporting injuries, business deals, whatever. Because such information serves as a kind of currency that can elevate the stocks of the person sharing it (and in some cases launch careers). Because we feel like we’re close to famous people even though we don’t actually know them, and so feel we have a right to their most intimate secrets. Because some of us resent their fame and wealth and seemingly perfect lives, and can’t wait to see them brought to earth. Because schadenfreude. Because the internet.

Is there a moral to this story?
Yes. Don’t believe every piece of gossip you hear, and don’t be so eager to spread it that you don’t take the time to try to verify whether it’s true or not. And while we’re at it, have you heard the latest about Bennifer?