RICHARD LITTLEJOHN: With £7billion wasted on diversity and inclusion, it’s time to stop banging the drum for workplace wokery

There was very nearly a black hole today where this column normally appears. I had planned to take the day off to brush up on my African drumming technique.

With England knocked out of the World Cup, it could come in handy if I decide to switch my allegiance to Morocco.

Then it dawned on me that if I didn’t write anything, I wouldn’t get paid. So paying the bills took priority over playing the percussionist from Senegalese songsmith Youssou N’Dour’s backing band.

No such worries for staff at Warwickshire County Council, where bashing the bongos is all in a day’s work. The council organised an African drumming workshop for employees as part of Hate Crime Awareness Week. 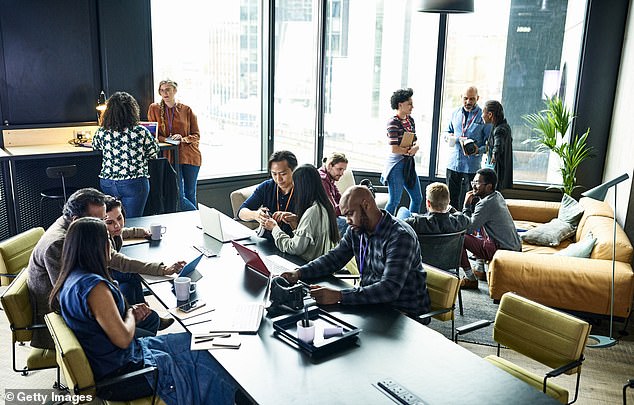 In recent years, public bodies have frittered away £7 billion of our hard-earned on workplace wokery

Quite what bouncing into Graceland has got to do with encouraging people to report alleged hate crime is anyone’s guess. Nor are we told how much this Expresso Bongo session cost. But, hey, it’s only taxpayers’ money, so who cares?

In recent years, public bodies have frittered away £7 billion of our hard-earned on workplace wokery. It ranges from daft stunts like African drumming sessions to frankly sinister brainwashing seminars on ‘unlearning whiteness’.

One million working days in the Civil Service alone are wasted every year on politically motivated ‘equality, diversity and inclusivity’ training.

Staff at the publicly funded Intellectual Property Office spent 24 days playing a specially designed ‘Respect At Work’ board game — which sounds a bit like Monopoly for Guardian readers.

‘Declare your pronouns or go directly to Jail.’

Public sector organisations, from Government departments and Town Halls to the police and fire brigade, employ more than 10,000 full-time diversity enforcers, on an average salary of £42,000 a year.

Celebrating diversity at the taxpayers’ expense is the country’s fastest-growing job creation scheme.

Back in the summer I brought you news of a few of the exciting career possibilities being advertised. Here’s a couple of examples . . .

The NHS is constantly pleading poverty, but that didn’t stop Doncaster and Bassetlaw Teaching Hospitals creating a role for a ‘Head of Leadership, Equality, Diversity, Inclusion and Wellbeing’ on the thick end of £76,000 a year — triple the starting salary of a junior doctor.

In Surrey, they were desperately seeking an Equality, Diversity and Inclusion Lead on 53 grand, plus an extra five per cent allowance to compensate for the cost of living and commuting in one of the more expensive parts of the country.

But then the advert stressed that working from home was to be encouraged. So why the top-up? Presumably to pay for their Netflix subscription and Hobnobs when they’re WFH.

The mystery is how they manage to organise all these workshops and seminars when hardly anybody employed by the Civil Service bothers going into the office more than one or two days a week. Can you do African drumming over Zoom?

And even when they do turn up, in between playing woke board games, ingesting diversity dogma, and taking part in ‘self-hate’ sessions, it’s not surprising they never get any proper work done.

OK, so it’s easy to mock. But at a time when so-called public services are a shambles and the country is mired in post-Covid debt, with taxes at a 70-year high, it’s nothing short of a scandal that so much is being flushed down the gurgler on political fripperies.

The job of the NHS, for instance, is to treat patients. Full stop.

Not to tell staff how to think. Yet if the salary structure is any indication, the Left-wing bureaucrats who run the health service value equality and diversity officers above nurses, ambulance drivers and junior doctors.

With seven million people waiting for operations, how the hell can the NHS justify spending 76 grand, plus perks, on a ‘Head of Leadership, Equality, Diversity, Inclusion and Wellbeing’?

What about the wellbeing of patients suffering from cancer, or waiting interminably at the back of the queue for a new hip? As I said, quite apart from the outrageous expense, the really sinister aspect of all this is the entire public sector’s ruthless promotion of contentious woke doctrine such as ‘critical race theory’ — which peddles the lie that Britain is an evil society built on racism.

If staff don’t buy into this wicked creed they can forget about promotion. If they openly challenged it, they would probably get the sack after being fitted up on a charge of ‘racism’ or ‘transphobia’ or somesuch.

It even extends to private companies, who must sign up to the woke agenda if they are to stand any chance of winning contracts from the public sector.

All this has come to pass during 12 years of nominally ‘Conservative’ Government. This week, 40 Tory MPs finally rebelled, demanding that the Chancellor turns off the tap for everything from hiring diversity tsars to holding woke workshops.

They’re wasting their time. There’s no more chance of that happening than England winning the World Cup this century. They might as well get with the programme. The game’s up.

Now, where did I put my bongos?

Six inches of snow in the South-East, the M25 gridlocked in both directions, schools shut, coal plants warmed up because the wind turbines can’t cope.

Surely you don’t expect this kind of chaos in December. It must be down to global warming.

A drag artist called Le Gateau Chocolat has complained that after paying £589 for a first-class open return rail ticket from Brighton to Bangor, in North Wales, he got no dinner and the return leg was cancelled.

He should be so lucky. If the railway companies give in to the RMT’s pay demands, we’ll all be paying £589 for a second class, one-way ticket. That’s when they’re not on strike. 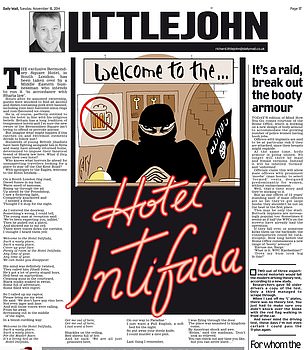 Reading the papers at the weekend was like watching my past columns coming back to haunt me. Firstly, the sad death of lovely Ruth Madoc reminded me that not so long ago I wrote a Hi-de-Hi spoof, in which I suggested cross-Channel migrants arriving illegally in Kent should be housed in out-of-season holiday camps like Maplin’s.

It was supposed to be a joke. It now turns out that’s exactly what the Government is planning to do, as part of a plan to cut the £7 million a day putting them up in hotels.

Elsewhere, there was a story revealing that the security services are worried extreme Islamist groups could be targeting migrants in these hotels as potential recruits.

Funnily enough, eight years ago I had an eerily similar thought. I wondered what might happen if Isis started infiltrating hotels here?

That column was headlined Welcome To The Hotel Intifada, based on the Eagles’ classic. You couldn’t make it up.

Except I did — not once, but twice. Mystic Rich strikes again.

Who’d be an employer these days? Last week we learned that potential staff will in future be entitled to WFH from day one. Now The Mail on Sunday has revealed that desperate companies struggling to hire people are having to offer all sorts of other goodies by way of incentives.

When I joined London’s Evening Standard, back in the dim and distant, every Friday was Beer Friday. So was every other day of the week come to that. Beer Monday, Beer Tuesday and so on. All on expenses. Friday was actually known as ‘Poet’s Day’, as in Push Off Early, Tomorrow’s Saturday. Or words to that effect. Forty years later, everyone’s taking the P.