The women often have their eyes closed, heads arched back, breathing out, unaware they are being observed; their imagined breath is depicted. Intimate and compelling, these photographs give no clue as to what the women are doing, but the effect is mesmerising. As a viewer you feel slightly complicit, like you’ve happened upon a private moment. 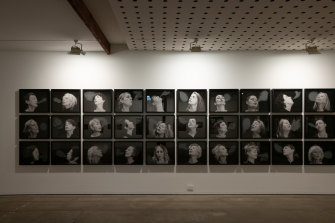 Installation view of Julie Rrap’s Blow Back at the Centre for Contemporary Photography.

Julie Rrap’s ambitious Blow Back documents 33 female artists, an intriguing series in black and white that raises more questions than it answers. Showing at Fitzroy’s Centre for Contemporary Photography, it continues the Sydney-based artist’s practice of examining women and their depiction in art and in society. It’s an evolving concept, something she might add to over time.

Originally, Rrap planned to create a picture of her own breath but the idea evolved into featuring “my sort of community in Sydney, I guess”.

Although Rrap came up with the idea before Grace Tame and Brittany Higgins hit the headlines and well before the pandemic, the work references those high-profile women and the blowback against them, as well as articulating the power of breath. Once a sign of life, breath under COVID has also morphed into a threat. The breath is elusive and fugitive, much like photography, she says. 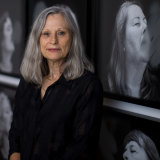 The images are time-consuming to create. After doing the shoot and making the prints, Rrap hand-grinds a glass panel in the deep frame to create the effect of the breath, “so when you look at them, it’s as if their breath is landing on the glass, it’s sitting a few centimetres in front of their face. Each breath is like an expression of the portraits in a way.”

She tried to make each breath “interpret them a little bit, a gentle exchange in a way, me making the breath for them”.

Along with the portraits, Rrap has listed all the women’s names, in a nod to the Know My Name project at the National Gallery of Australia. “They are not meant to be anonymous. In a funny sense they are my collaborators, we’re all equal in a sense.”

As for the name, Rrap called the series Blow Back “because it was quite funny”.

“In advertising, women often have their eyes closed and their mouths slightly open, it’s like this vacant entry point,” she says, which she riffs on with “all these women artists who are the opposite of that”.

She says the work created its own relevance. “I do think artists are weirdly predictive, we live in the world and [we’re] reading, absorbing, thinking. Any person who is engaged in a reflective endeavour, your outlet, whatever your practice is, can contain all those things. I’m glad I made that work before it became obvious, [there’s] always a danger that it becomes literal.” 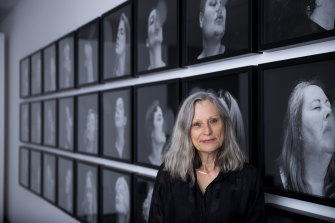 Rrap at the Centre for Contemporary Photography.Credit:Simon Schluter

Showing alongside works by Anu Kumar, Cate Consandine and artists from the Spinifex Arts Project, as well as work by Irish artists from Belfast Exposed, it’s part of a first-of-its-kind collaboration between the Centre for Contemporary Photography and its Northern Irish equivalent – an initiative of the UK/Australia Season, a series of cultural events between the two countries.

The work has echoes of a series Rrap created in the 1990s in Europe of people posing as the Mona Lisa. Before that, she had gathered 100 faces of women in art, which she says were difficult to find because traditionally females were depicted either nude or not looking at the painter – or camera.

Rrap also has a show at Arc One. Called Drawn Out, 1987-2022, it features six photographs from a series she made in 1987 when she was living in Paris. She used to go to the museums and take “bad photos of the works in the museums and do these line drawings, and then I’d perform with them”.

Accompanying these works is a video Rrap created recently, in which she is trying to draw herself, naked, “until I get completely covered in the charcoal”. “What it does is somehow activate the photos, the video energises the photos,” she says.

At the Adelaide Biennale, she has a work called Write Me, for which she created an alphabet from her face. One component is interactive: people can type on a keyboard and while her face stays almost constant, she has 26 expressions, playing with her eyes, nose and mouth, “twitching and moving as you type whichever letter it is”. There’s also a big animation work, featuring text from female writers such as Dora Maar and Bea Miller.

While she makes video and sculptures, Rrap always returns to the portrait. “When you photograph somebody, it’s like this awkward moment when you have this existential crisis about who you are,” she says, adding that “while a portrait carries all this weight, it’s just a moment in time. Photography captures a fraction of a second of you but fixes you in time … They could be thinking about what they had for breakfast.

“I always argue that the portrait is always more about the person looking at it than the person being photographed.”

Blow Back runs as part of We, Us, Them until April 17. See ccp.org.au/exhibitions/all/we-us-them