Reggie Bush, the former USC Trojans and NFL star, is calling on the NCAA to return his Heisman trophy and reinstate his college on-field statistics after the NCAA announced new rules regarding the compensation of college athletes. Bush, 36, is making his case after the NCAA approved a temporary policy to allow college athletes to get paid for the use of their name, image and likeness.

“It is my strong belief that I won the Heisman trophy ‘solely’ due to my hard work and dedication on the football field and it is also my firm belief that my records should be reinstated,” Bush said in a statement.

In 2005, the former running back won the Heisman Memorial Trophy, college football’s highest individual honor, after an impressive season with USC. Nearly a year later, allegations surfaced that Bush and his family had violated NCAA rules by receiving gifts and money worth more than $100,000 from two marketing agents, who allegedly hoped to entice him to sign with them upon leaving school.

In 2010, the NCAA banned USC from bowl games for two years and vacated all of the team’s wins with Bush, including its 2014 national championship victory. Bush forfeited his Heisman Trophy the same year.

In his statement Thursday, Bush said his attempts to contact the NCAA have been unsuccessful.

“We left multiple messages for Michael Comerford, the President of the Heisman Trust, but instead received a call from Rob Whalen, the Executive Director, who stated that Mr. Comerford would not be calling us back and that, in any event, they could not help us,” Bush stated. “We reached out to the NCAA on multiple occasions and received no help or got no response at all.” 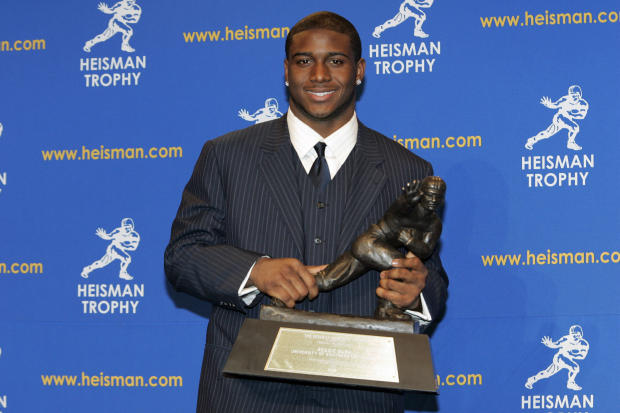 Bush later tweeted: “I never cheated this game. That was what they wanted you to believe about me.”

Neither the NCAA nor the Heisman Foundation immediately responded to CBS News’ request for comment.

Athletes and sports analysts have rallied behind Bush, calling on the NCAA to give him back the coveted award. “Give Reggie Bush his Heisman back while we’re at it,” former quarterback Johnny Manziel tweeted.