This is the week The Block gets Keithed, the moment reality comes crashing into reality TV.

As contestants and fans of the long-running renovation show (this is season 15) well know, to be Keithed (v., trans., passive) is to have one's best-laid plans undone. Usually it's unsmiling resident foreman Keith Schleiger delivering the bad news, typically because of a fault or stuff-up the contestants (or their tradies) should have seen coming. This time, it's COVID-19. 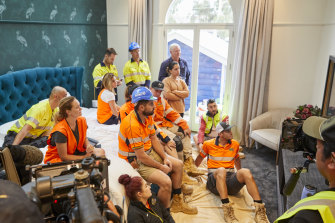 The contestants of The Block gather to hear an update on COVID-19 from the Prime Minister. Credit:Nine

Arguably, the contestants should have seen that coming too; certainly viewers have no excuse. From the very first episode, The Block has been foreshadowing what was to come: the lockdown – or, as they inevitably term it, the Blockdown. Well, it's not as if they could have kept it a secret.

What a curse it must have been for the show to be shutdown for six long weeks. But also, what a gift.

Though it's born of the documentary format, reality TV doesn't often bear witness to the world, its focus rather being inward, on the tasks, behaviours and personalities at play within its constructed environs. But this week, in episodes filmed in late-March, The Block bubble bursts and the real world comes flooding in.

First Scott Morrison breaks the bad news about the worsening health situation, via a TV screen set up on the Brighton building site where five modest period houses are being supersized to cater to every imagined whim of potential buyers. Then comes Daniel Andrews to announce restrictions. "This is step one," says the Victorian Premier. "There is almost certainly going to be a step two, and maybe even beyond that." 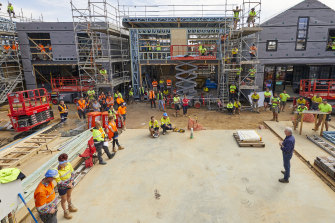 ‘I’m shutting it down’: Scott Cam delivers the bad news.Credit:Nine

Oh how Melbourne, still in the grip of a stage-four lockdown six months later, would settle for that "maybe" now.

Precisely what it means isn't at all clear at first. But when word comes, it's like a novelty coffee mug has spoken: keep calm and carry on.

Valiantly, they try. But their minds, and their hearts, are increasingly elsewhere. "We are here to the end," says rockabilly poster-girl Tam, "and that's the only thought process we can have at the moment because if we don't do that…"

"You check out," says husband Jimmy.

It's all a matter of priorities. "You feel silly because you're worrying 'can I get a bed for this room' when there are people out there dying of this virus," says Jade, who has a vulnerable daughter back home on the farm in South Australia.

Or as Luke puts it, "to think that we're not going to be affected and we'll just carry on as per normal is pretty ludicrous". And inevitably, they can't.

There's brief talk of flying kids and carers over and setting up a school for them, but events quickly make that redundant. Importantly, though, the sponsor of this hypothetical mercy dash still gets a plug. (On a show where everything is sponsored, the biggest surprise might just be that no one has yet taken up naming rights for the virus.)

The Block is of course built as entertainment, an escape from real-world woes, and so it doesn't wallow in all this angst for too long. But nor does it skirt it, and in the episodes leading up to the six-week shutdown it offers a genuine snapshot of the confusion, fear and uncertainty that swept the country at the outset of this crisis, as well as the "we're all in this together" spirit that briefly offered a path through it. 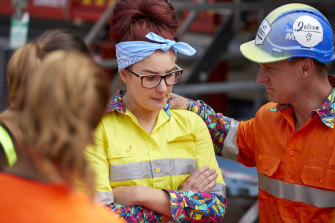 Jimmy and Tam take in the news. Credit:Nine

It's dramatic, and it's moving. And, with real-world lockdown fatigue and inter-government sniping such factors now, it's a handy reminder that we're at our best when we look beyond our bubbles.