Deluded: that was Philip Hammond’s word yesterday. He kept using it on day three of the Commons debate on the Government’s Brexit deal.

Anyone who thought the EU would improve its offer was ‘deluded’. Any suggestion that ‘no-deal’ could be better for us than Mrs May’s floater was a ‘delusion’.

MPs had to support the Government. Otherwise the City – generator of more than 10 per cent of tax money – would be hammered. Got that? And if you disagreed with him you were in ‘fantasy world’.

I’m in charge here. Do what I say, worms. Light on the charm, Hammond. He is Senator Supercilium, Captain Uppish, the languid second-rater promoted beyond his flair.

That happens with sinking crews, in politics and elsewhere. 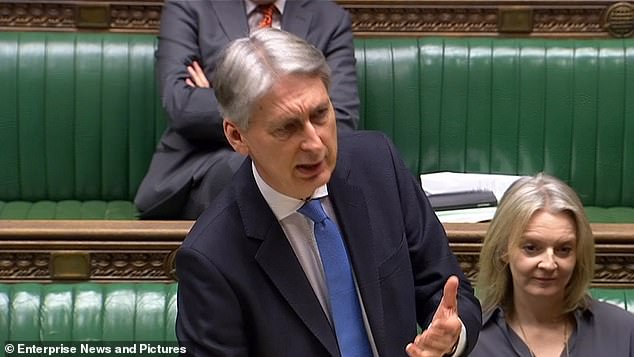 Hammond’s midday speech to the Commons (pictured) did not draw much of a crowd, writes Quentin Letts 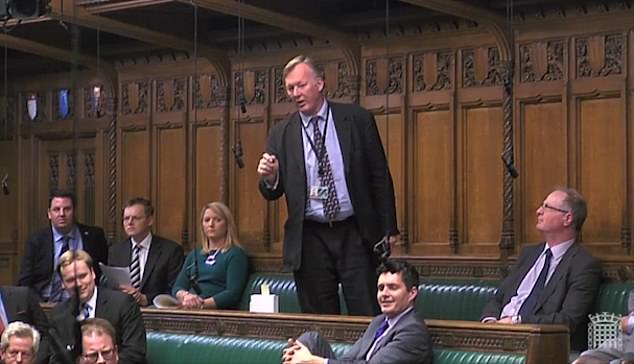 Bill Wiggin (Con, N Herefordshire and pictured) harrumphed with each fresh nasal prediction of gloom from the Chancellor

Were you a restaurateur you would not wish to employ Groaner Phil front-of-house. If a diner asked for eggs on toast, he would close his notepad, flatten his voice and say ‘no ees possible’.

What a magnificently determined defeatist. He makes Andrei Gromyko look like Basil Brush.

His midday speech to the Commons did not draw much of a crowd. This ‘big debate’ on Brexit is a flop at the box office.

Many of the Conservatives (ie the people the Government needs to win round to the deal by Tuesday) were palpably underwhelmed by the Chancellor’s finger-wagging performance.

Had Mr Hammond been wearing wing mirrors he would have seen his party colleagues becoming increasingly restive, the longer he whined at them. He was achieving the opposite of what 10 Downing Street needed him to do.

There was no whiff of a rethink. Bill Wiggin (Con, N Herefordshire) harrumphed with each fresh nasal prediction of gloom from the Chancellor. Mr Wiggin is a stalwart Brexiteer.

Young Mr Clarke, angular and clever, tried to intervene on the debate but Mr Hammond ignored or did not hear him.

Mr Hammond, relishing the apocalypse, was soon citing official sources predicting economic catastrophe if we left the EU without a wide-ranging agreement.

If a pilgrim started enjoying flagellation that much, you’d start wondering what was on his computer hard-drive. 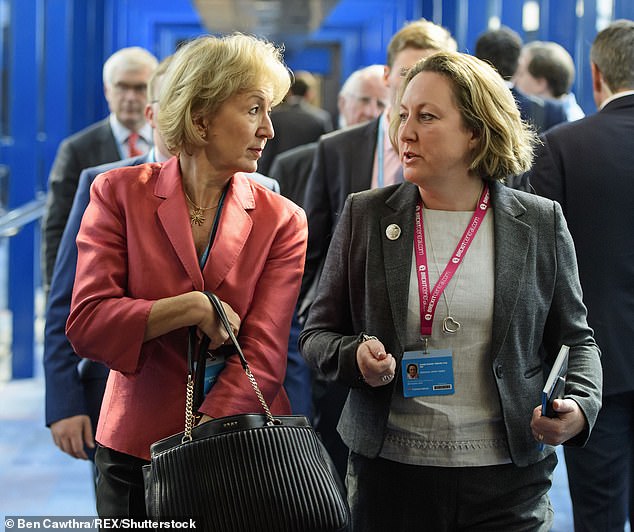 Anne-Marie Trevelyan (Con, Berwick-on-Tweed and pictured right with Andrea Leadsom) shook her head, rolled her eyes and exchanged a comment or two with fellow-Eurosceptic Simon Clarke, while Hammond was speaking

Sir Desmond clutched his brow, as though bifurcated by headache. Mention of Bank of England and Treasury predictions was too much for level-mannnered John Baron (Con, Basildon & Billericay).

He untwined his legs and twice told Mr Hammond that official forecasters had got things risibly wrong when they claimed the Leave vote would spark immediate job losses and economic mayhem.

Quite the opposite had happened, observed Mr Baron. Mr Hammond, by way of reply, insisted that the predictions being made by official bodies were ‘not economic forecasts – they are modelled scenarios’.

Anyway, he continued, the Treasury had done ‘a huge amount of work’ on forecasting since it so spectacularly goofed its forecasts in summer 2016.

They now employed a ‘computible general equilibrium model’. Phwoarr. She sounds a bit of all right.

Watching the reaction of Tory MPs to the Chancellor yesterday, I’d say it may be Mr Hammond who is living in fantasy if he really thinks the deal – which he pointedly referred to as ‘the Prime Minister’s deal’ – can ever carry the day.