The Queen has led birthday wishes to Prince Harry on his 37th birthday, sharing a selection of photos highlighting her grandson’s charity efforts while he was a working royal.

The Duke of Sussex, who has quit royal duties and is currently living in an £11m mansion in California also received birthday greetings from the Prince of Wales and the Duke and Duchess of Cambridge.

Poignantly, Prince Charles shared throwback photos with his younger son, amid a rift that Harry made public during his bombshell interview with Oprah.

Meanwhile, Prince William and Kate Middleton kept their message simple, posting a solo portrait of the Duke with the caption: ‘Happy birthday Prince Harry,’ and a red balloon emoji. 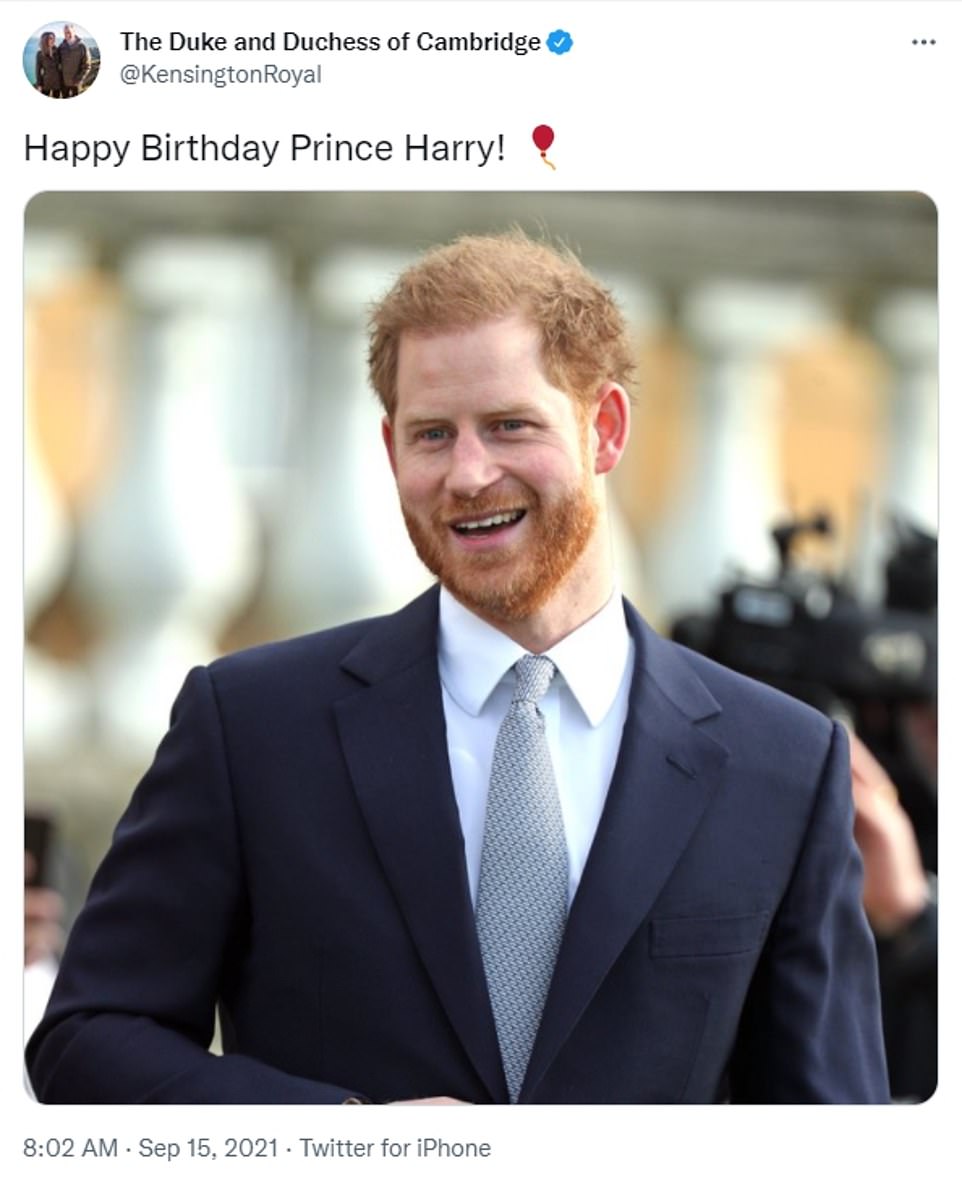 Prince William and Kate Middleton kept their message simple, posting a solo portrait of the Duke with the caption: ‘Happy birthday Prince Harry,’ and a red balloon emoji

It’s not known how the Duke will celebrate his birthday, but Meghan recently marked her 40th with her own endeavor – the 40×40 project – in which she asked high profile people to commit to giving 40 minutes of their time to support women going back to work.

The birthday wishes come after Finding Freedom author Omid Scobie – who penned the biography with Carolyn Durand and released an updated version last month – said Duke and Duchess of Sussex are ‘making very little progress’ in reconciling with the royal family.

He said Prince Harry and Meghan were ‘desperate to get their story out there’ when they gave their explosive Oprah Winfrey interview earlier this year.

Appearing on Good Morning America today, Omid claimed the couple and the royal family both want all involved to take ‘accountability and ownership’ for their role in the rift. 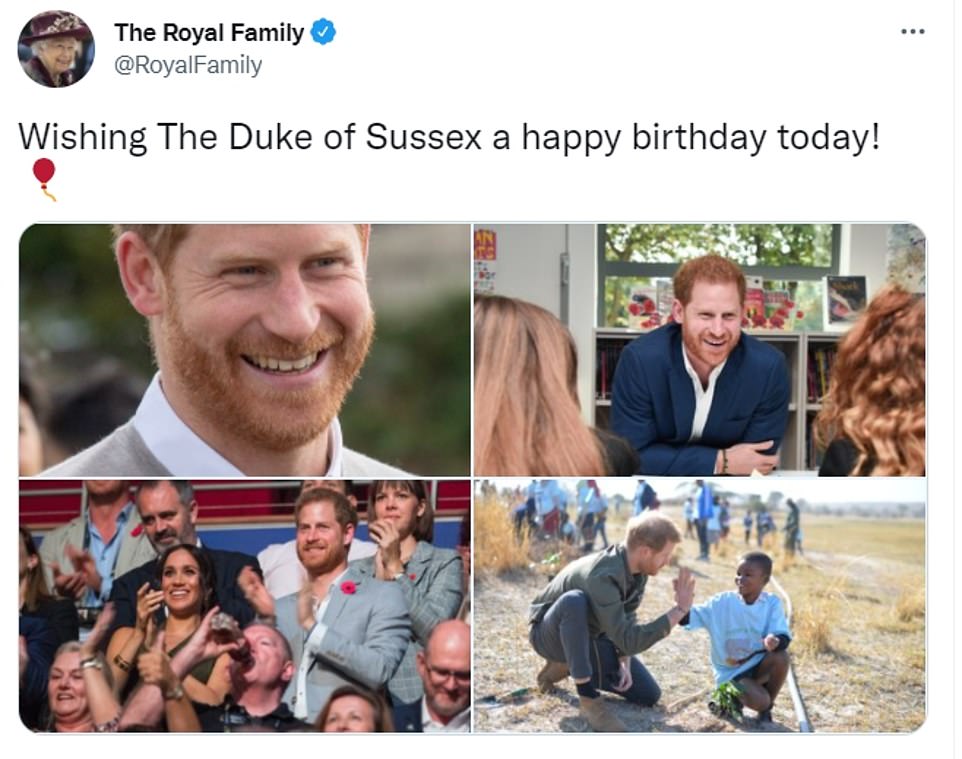 The Queen led birthday wishes to Prince Harry on his 37th birthday, sharing a selection of photos highlighting her grandson’s charity efforts while he was a working royal 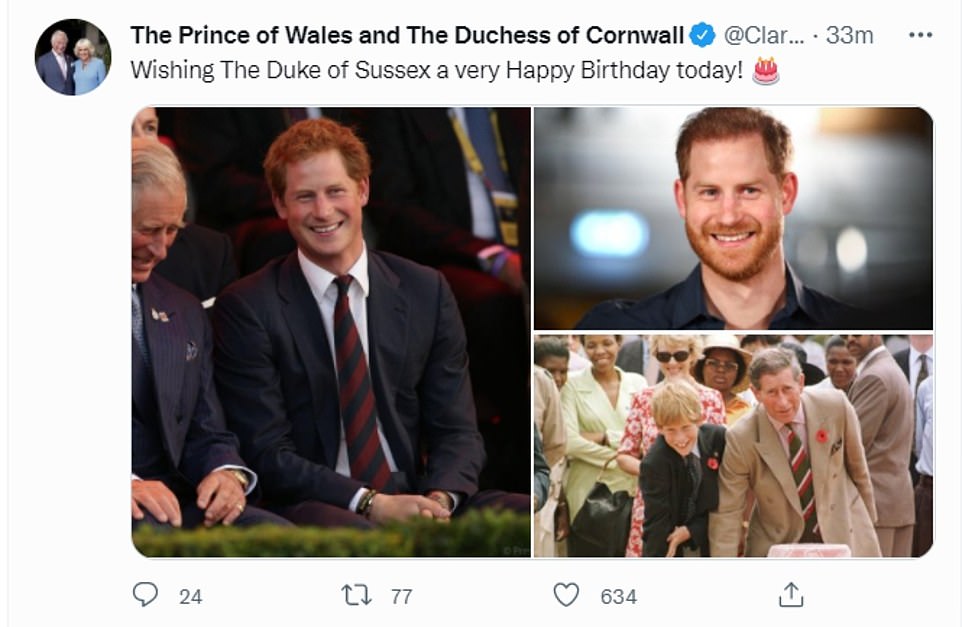 Poignantly, Prince Charles shared throwback photos with his younger son, amid a rift that Harry made public during his bombshell interview with Oprah

Meanwhile Scobie also suggested allegations of Meghan’s bullying behaviour made by a senior Palace aide before the Oprah Winfrey interview were ‘revenge’ from The Firm for the Duke and Duchess’ actions.

The Sussexes were accused of leaving behind a ‘lot of broken people’ with ‘young women broken by their behaviour’ and a source describing one member of their staff as ‘completely destroyed’ by the ordeal.

Scobie said: ‘For me, it’s impossible to come to any other conclusion that this is some sort of revenge from the institution that we saw pulled into action just before the Oprah interview came out.’

The Queen launched an unprecedented inquiry into allegations that Meghan and Harry bullied their staff earlier this year – leaving royal employees ‘shaken’ by ‘unhappy memories’ being brought up about a ‘toxic period’ before the couple emigrated.

Devastating claims that the Duchess of Sussex inflicted ’emotional cruelty’ on underlings and ‘drove them out’ were ‘very’ concerning, Buckingham Palace said.

Prince Charles’ birthday wishes come after a source claimed that Duchess of Cornwall is unlikely to ever forgive her stepson Prince Harry for their actions since stepping back as senior royals in March last year.

The Duke, 37, and Duchess of Sussex, 40, are ‘making very little progress’ in reconciling with the royal family, the author of Finding Freedom has claimed

Harry has addressed his relationship with his father in several interviews throughout the year – after first opening up about it in a bombshell interview with Oprah Winfrey in March where he claimed he has been ‘let down’ by Prince Charles.

Speaking to The Telegraph, royal expert Camilla Tominey reported that a source close to Camilla has said that even though Buckingham Palace is conveying the message that Prince Harry and Meghan Markle are still loved by the family, the Duchess of Cornwall will struggle to move on.

Another source claimed that Prince Charles was deeply affected by the reported fall out with Prince Harry and that it had been ‘really hard for him.’

Meanwhile Prince William and Harry are said to have barely spoken and have an ‘incredibly strained’ relationship after two years of rows over Harry’s wife and her alleged treatment of staff, the couple’s decision to emigrate to America and the ‘truth bombs’ the Sussexes have dropped in TV interviews watched by tens of millions of people around the world.

Harry and Meghan believe they were abandoned by the Royals, even accusing them of racism towards Archie and ignoring their cries for help when the Duchess of Sussex felt lonely and suicidal while pregnant in London.

An updated edition of Harry and Meghan biography Finding Freedom also made a string of other fresh claims that are likely to trigger debate about the state of their relationship with the Royal Family. 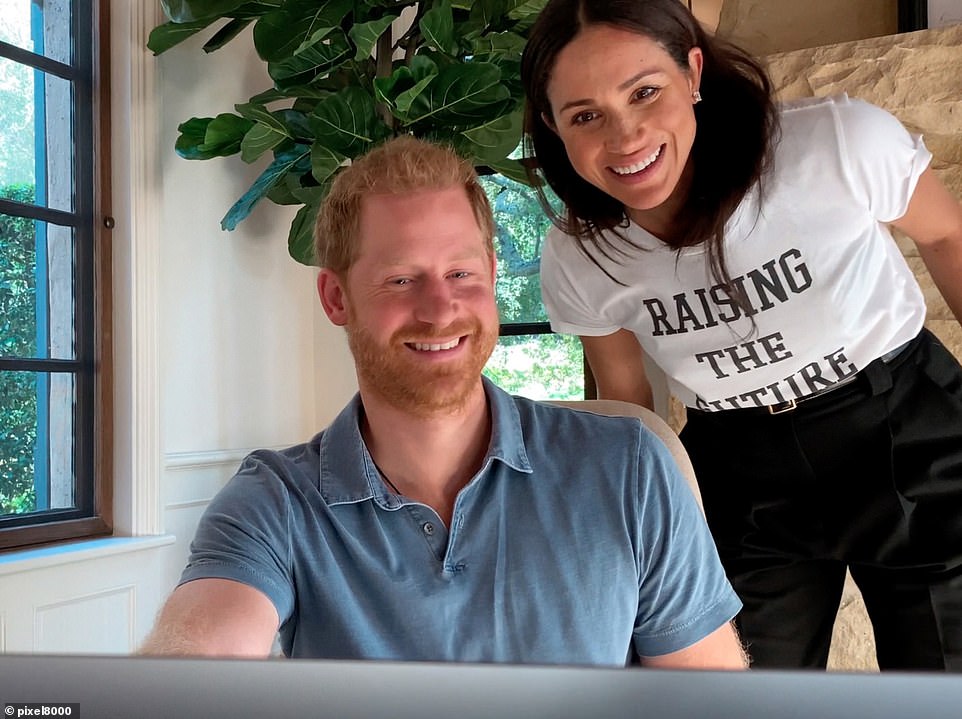 A leaked version of the epilogue claimed the couple had considered naming the royal they alleged had made a racist comment about their son, Archie; that some royals were ‘quietly pleased’ the Duchess of Sussex missed Prince Philip’s funeral and that Prince William was ‘furious’ about their interview with Oprah.

The new edition also said the Sussexes had ‘no regrets’ about quitting their royal roles and that Meghan found her explosive Oprah interview ‘cathartic’ and ‘liberating’.

Meghan plunged the monarchy into crisis after telling Oprah Winfrey that an unnamed royal had expressed ‘concern’ about Archie’s skin before he was born.

The epilogue reveals that a source told authors Omid Scobie and Carolyn Durand that the Sussexes had considered naming the family member – but had ultimately decided not to.

It also claimed that ‘sources close to the Sussexes’ had said that the Royal Family’s reaction to the allegations made by the couple ‘was not positive’. 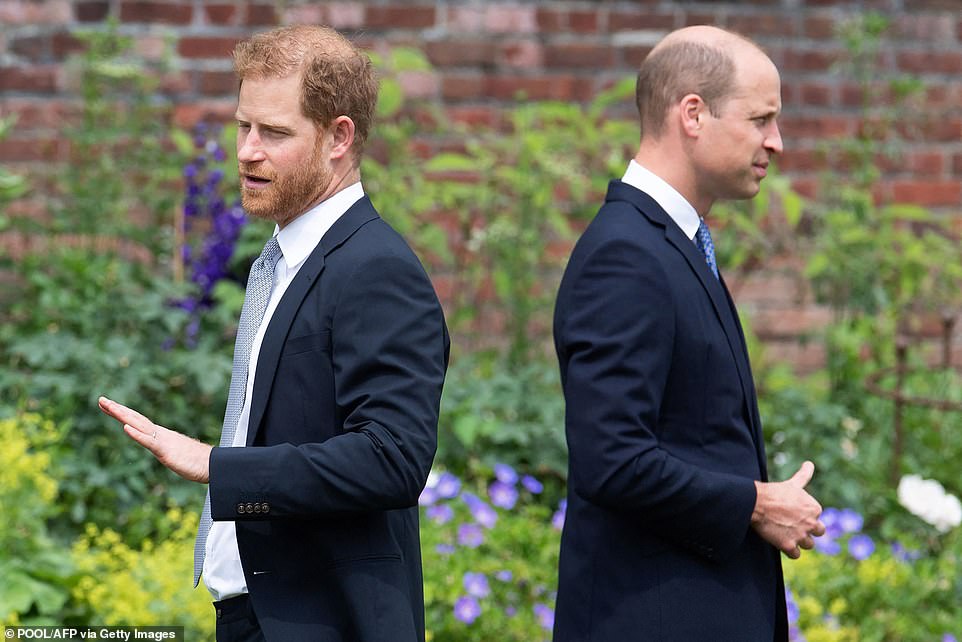 The source told the authors that there had to be ‘some acknowledgment’ about what the Sussexes went through for there to be ‘progress’.

The criticism came after a carefully-worded statement from the Queen following the controversial Oprah interview, which expressed concern for the couple but insisted that ‘some recollections may vary’.

Harry and First Lady Jill Biden praised each other’s support for wounded veterans during a 30 minute virtual event to celebrate Warrior Games Warrior athletes, their families, and caregivers on Monday.

During their first event together since she became First Lady and he moved to the United States, Dr Biden praised Harry, saying: ‘You live by a simple principle – served together recovered together.’

And Prince Harry returned the praise, thanking the First Lady for her support of veterans and their families.

‘Thank you for your service and your continued support over all these years. It’s been fantastic to see you in action in various parts of the world giving everything that you’ve got to so many people to not just those who wear the uniform but to the families as well. A lot of them wouldn’t be here without you so, so thank you,’ he said.