Australia’s former ambassador to China and Japan, Jan Adams, will head up the Department of Foreign Affairs and Trade in a shake-up of senior public servants.

Prime Minister Anthony Albanese appointed four new departmental secretaries on Wednesday, having put former university vice chancellor Glyn Davis at the helm of his own department shortly after the election. 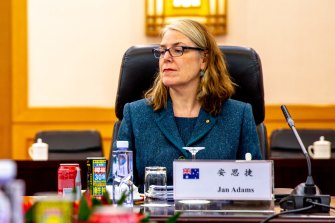 The new head of the Department of Foreign Affairs and Trade, Jan Adams, has been Australia’s ambassador to China and to Japan.Credit:Dan Sandoval

Adams replaces Kathryn Campbell, who moved to DFAT last July from the Department of Social Services. Labor had criticised her appointment because she oversaw the robodebt program that was later found in court to be unlawful.

In a statement Albanese thanked Campbell for her work and said she would take up a senior appointment in the Defence portfolio in an AUKUS-related role.

Former senior NSW and Victorian public servant Jim Betts will lead the Department of Infrastructure, Transport, Regional Development, Communications and the Arts. He previously led the NSW planning department and Victoria’s transport department. Former NSW premier Gladys Berejiklian had appointed Betts head of the Department of Premier and Cabinet, but new leader Dominic Perrottet removed him before he began the role.

Albanese – a long-time infrastructure minister in the Rudd-Gillard era – said Betts would bring “a deep understanding of the priority challenges facing governments in this space” to the federal level, where he replaces Simon Atkinson.

Finance secretary Rosemary Huxtable is retiring in August after six years leading the department and will be replaced by senior Treasury official Jenny Wilkinson. She has worked across a range of public service agencies, including climate change, Prime Minister and Cabinet, and the Reserve Bank.

Former Fair Work Ombudsman Natalie James will take on the new Department of Employment and Workplace Relations, while David Fredericks will shift from the Department of Industry, Science and Resources to lead the newly created Department of Climate Change, Energy, the Environment and Water.

The new head of Industry is yet to be announced.