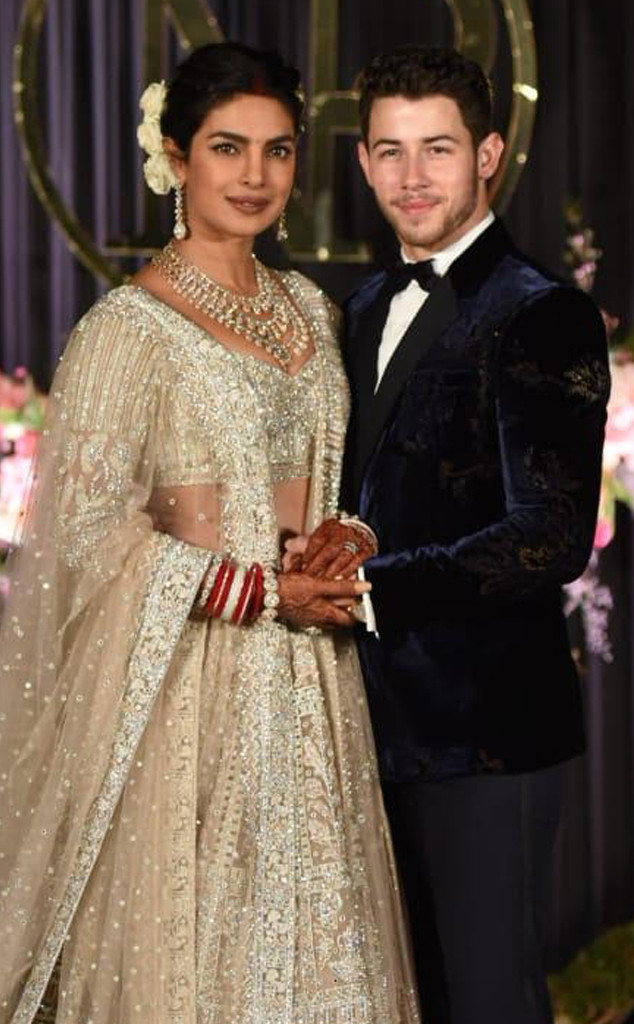 Priyanka Chopra is taking bridal fashion to a new level.

On Tuesday, fans got their first sneak peek of the stunning ensemble Chopra wore to her wedding reception with Nick Jonas. The Quantico star looked gorgeous in a silver-blush beaded lehenga designed by Falguni Shane Peacock. It looks like a lot of work went into the ensemble, too.

The creative directors for the brand, Falguni and Shane Peacock, revealed the level of work that went into creating the outfit on Instagram. According to the design duo, the lehenga took 12,000 man-hours of work and 80 craftsmen to create. The piece also featured crystal hand embroidered motifs from the wedding in Jodhpur, including elephants, birds, flowers and butterflies.

Chopra accessorized her look with diamond earrings and a statement necklace by Khanna Jewellers. Of course, she also donned her new wedding ring.

The reception was held at the Taj Palace Hotel in New Delhi. The couple celebrated their newlywed status with 1,000 people, including several distinguished guests. In addition to their celebrity family members—including Jonas’ brother, Joe Jonas, and future sister-in-law, Sophie Turner—the two were joined by several Bollywood stars and the Prime Minister of India, Narendra Modi.

“A heartfelt thank you to our Hon’ble Prime Minister Shri @narendramodi ji for gracing us with your presence,” Chopra wrote alongside a photo of her sharing a laugh with Modi and Jonas. “Touched by your kind words and blessings. @nickjonas.”

The bride and groom seemed to have a wonderful time socializing with their guests and posing for portraits with their photographers.

“Their moods were very jubilant,” a source told E! News. “She was happy and addressing everyone in the party. She was also being very accommodating to the photographers. She and Jonas looks like they are on top of the world.”

The couple tied the knot over the weekend in two ceremonies at the Taj Umaid Bhawan Palace: a Christian service and a traditional Indian ceremony

For the first ceremony, Chopra walked down the aisle in a custom Ralph Lauren Gown and 75-foot veil. She was escorted by her mother, Madhu. Jonas also wore a classic double-breasted tuxedo by the brand that featured a piece of the bride’s dress inside of the lapel. The intimate detail rested over his heart and featured the words “my jaan,” which means “my life.”

For the second ceremony, Chopra wore a red Indian lehenga by Sabyasachi. According to the designer, the custom piece was hand-embroidered and featured hand-cut organza flowers, French knots and red crystals. The piece took 110 embroiderers and 3,720 hours to create. As for the jewelry, Chopra’s bling featured uncut diamonds, emeralds and Japanese cultured pearls in 22 karat gold, as well as small stars in uncut diamonds. Jonas wore a hand-quilted silk sherwani and a hand-embroidered chikan dupatta with a chanderi tissue safa on his head. He also accessorized his look with a rose-cut kalgi and diamond necklace by Sabyasachi, as well as Christian Louboutin gold shoes.

There were also several pre-wedding festivities that week, too, including a Mehendi ceremony and a Sangeet.

To see more of Chopra’s weeding-week looks, check out the gallery.

Congratulations to the happy couple!