Nick Jonas and Priyanka Chopra are really enjoying married life. And they’re letting everyone know it on Instagram. The newlywed couple has been very open about their relationship since they started seeing each other back in May 2018. And eager fans have been following them every step of the way. Now that they’re married, Jonas and Chopra seem really keen on continuing to share their love for each other with the world. Both Jonas and Chopra have been sharing lots of sweet moments on the social media platform. But Priyanka Chopra’s “marital bliss” Instagram with Nick Jonas definitely takes the cake.

In her latest Instagram post, Chopra shared a photo of herself relaxing with her new husband and showing off her incredible wedding ring. They look like two peas in a pod. Chopra is sporting a white robe, while Jonas looks to be enjoying a cigar. Overall, the photo is really sweet and shows just how in love the two stars are!

“Marital bliss they say.. ?❤️?,” Chopra wrote in the caption of the post, proving that she and Jonas are as happy as anyone could be. And that’s pretty darn romantic! If you haven’t seen Chopra’s latest Instagram, have a look at it down below:

The couple is currently on a mini honeymoon in Oman, according to Elle. And both Jonas and Chopra have been sharing glimpses into their romantic getaway in the Middle East. In one photo posted to Chopra’s Instagram Story, you can see a heart drawn in the sand with their initials inside it. It’s super cute! Have a look: 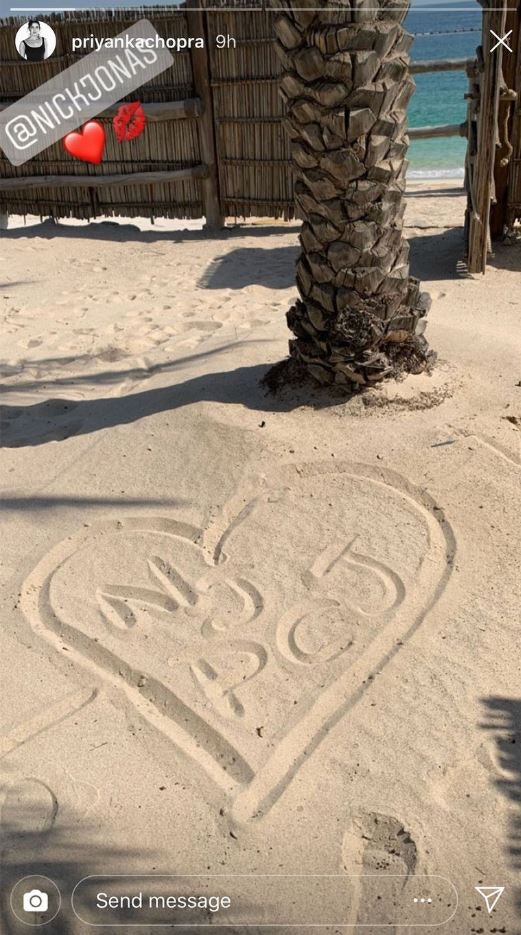 And Jonas recently shared a video of Chopra watching Elf for the very first time, which will definitely put a smile on your face. Here’s the video he shared:

While their mini honeymoon looks incredibly romantic, Jonas and Chopra will be heading back to work soon. In her first interview after marrying Jonas, Chopra revealed to India’s NDTV that the couple’s work commitments got in the way of a proper honeymoon.

"My work and Nick’s work are very important to us," Chopra explained. "My commitments matter to me a lot. My word is my bond. And we had decided to do this a long time ago before anyone was getting married and so I stuck to my commitment. But besides that it’s something I’m really excited about as well."

Chopra also opened up to the publication about her fashion choices for the extravagant wedding she and Jonas had in India. Of her choice in dress, Chopra revealed that everything was extremely personal.

"For me it was not about fashion. I wanted something unique,” Chopra said. “Both the dresses – red and white – were personalised for me… I had names, dates, my parents’ names… my mother-in-law’s wedding dress embroidered on mine… things that mattered to me.”

All in all, it seems like Jonas and Chopra knew exactly what they wanted for their wedding and everything turned out beautifully, even their mini honeymoon. They seem really happy right now and that’s such a great thing to see. They’re so cute together!