Spooky royals! Princess Charlene of Monaco shares a photo of her seven-year-old twins Prince Jacques and Princess Gabriella dressed up for a Halloween party

Princess Charlene of Monaco showed her family goes all-out for Halloween after sharing an adorable photo of Princess Gabriella and Princes Jacques all dressed up.

Charlene, 44, wished her Instagram followers a happy Halloween as she shared the photo of the seven-year-old twins dressed as a vampire and a pumpkin. In the background, pumpkin-themed balloons suggested the siblings were attending a Halloween party.

The children got into their roles, with Jacques narrowing his eyes and flashing his best spooky glare at the camera, while his sister contorted her hands into ‘claws’ while pulling her scariest face – which still looked adorable. 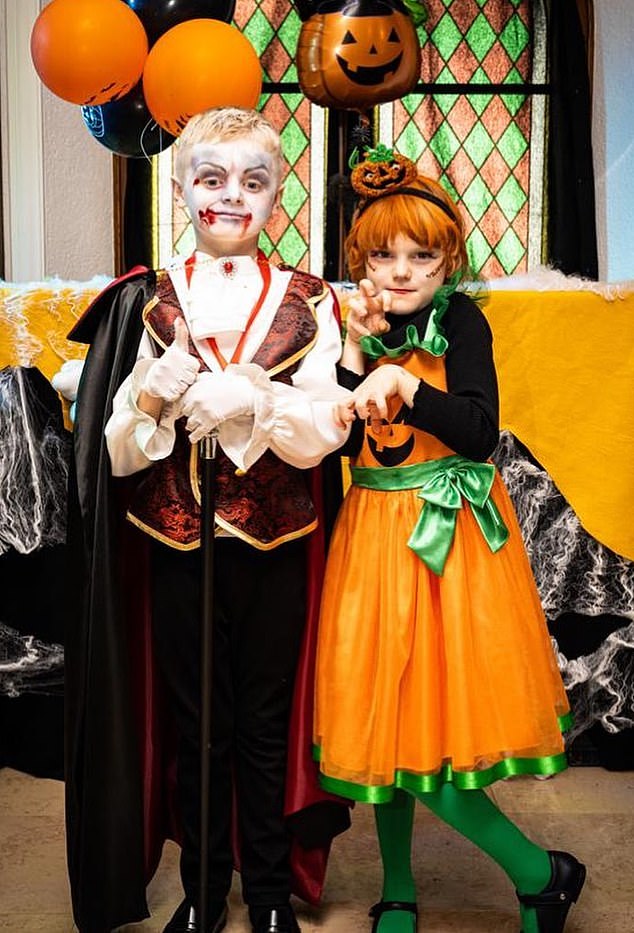 Princess Charlene posted a photo of the seven-year-old twins she shares with Prince Albert, Prince Jacques and Princess Gabriella, dressed up as a vampire and a pumpkin for Halloween 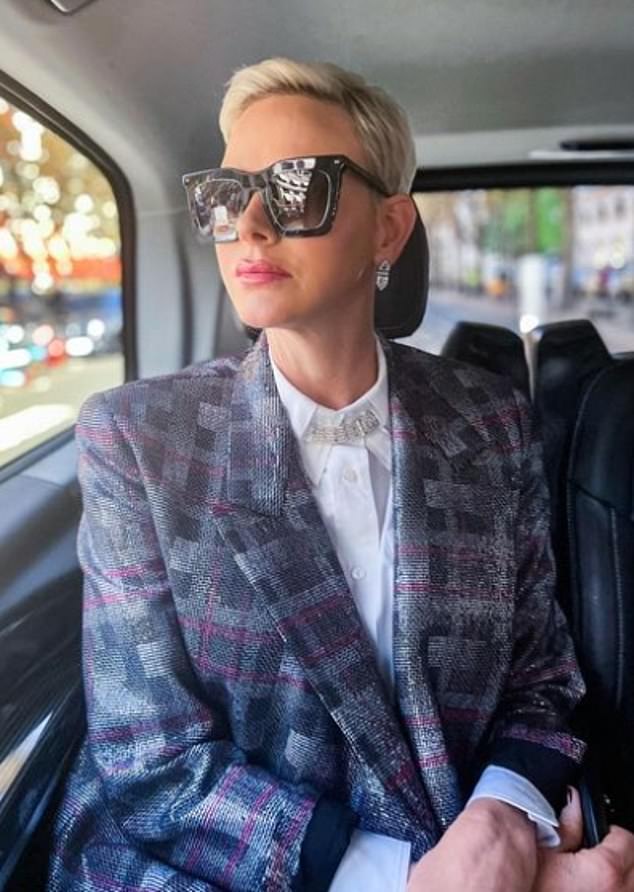 South African-born Princess Charlene has been full of praise for her children on Instagram, recently sharing a sweet school photo of the twins in their uniforms.

She shared the photo with the caption: ‘Growing so fast’ with two heart emojis.

Gabriella and Jacques are the children of Charlene, 44, and her husband, Prince Albert of Monaco, 64 – and last month they were spotted donning their red school uniforms for their first day of term at François d’Assise-Nicolas Barré after the summer holidays as their parents took them to the private school.

Royal fans were heartened to see the dedicated mother back in action following a spell in hospital in her native South Africa, where she was recovering from complications from a ‘severe ear, nose and throat infection’ she contracted in May 2021. 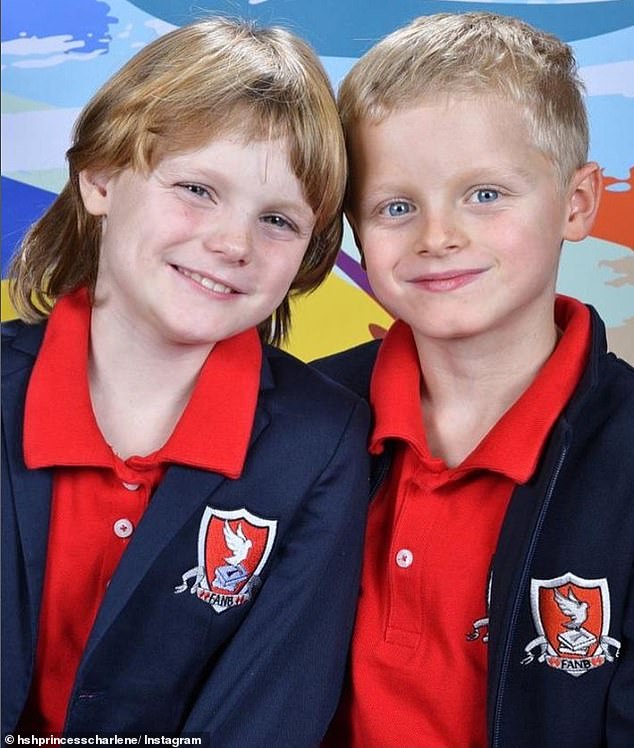 In her absence, Prince Albert did the first day of the school run alone that year, while Charlene was on the mend.

Since her return to public life earlier this year, Princess Charlene appears to be back to normal and is taking on several royal duties.

In September she travelled to London with her husband where the royal couple attended the Queen’s funeral at Westminster Abbey.

More recently, Charlene visited an animal shelter in a village between Monaco and the French Alps on Friday – which she and Prince Albert had opened a month earlier.

She was pictured stroking a rescue dog at the Society of the Protection of Animals (SPA) shelter in Peille. Charlene has been president of the animal welfare charity since last month.

The Princess – who was announced as SPA’s new president earlier this year – opened the premises with her husband Prince Albert II last month.

In the caption, the mother encouraged her 450,000 followers to support their local animal charities.

She wrote: ‘Went to visit the Monaco SPA. Please support a local SPA or animal shelter near you.

‘Thank you. Merci. With all my love.’

Since re-engaging with royal duties the Princess has put to bed rumours of a possible divorce or permanent move to Switzerland. 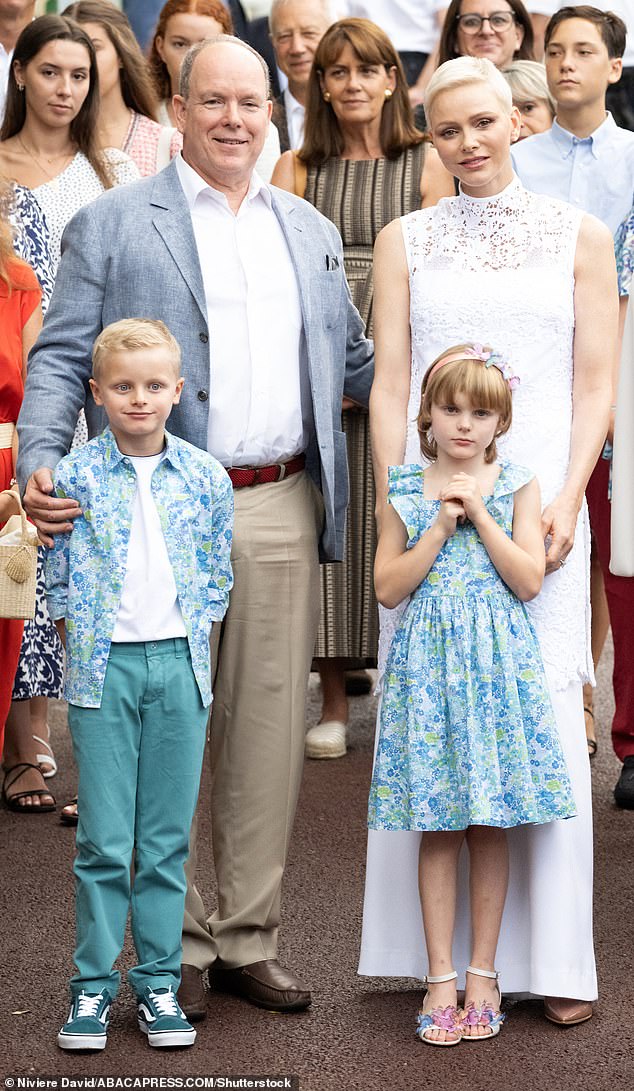 Princess Charlene says she is ‘focusing all her energy’ on her children Gabriella and Albert, both seven, since returning to Monaco. Pictured on September 3, 2022

In an interview in Monaco-Matin newspaper, she said: ‘I am very happy to be back in Monaco and with my family.’

She told the newspaper that she was determined to overcome her problems.

‘My state of health is still fragile and I don’t want to go too fast,’ she said. ‘The path has been long, difficult and very painful.’

Referring to the twins, Charlene said: ‘When I returned to the Principality, I focused all my energy on my children, my husband and my health because they are my priority.’

Princess Charlene returned to public duties in May, making the occasional public appearance with her husband Prince Albert and her children Prince Jacques and Princess Gabriella by her side.

But in recent weeks she appears to have been out and about a little bit more, giving royal fans a glimpse into family life using her Instagram account.