Royal on the FROW! Princess Charlene of Monaco demonstrates her typically understated style in a navy ensemble at the Akris Paris Fashion Week show

Princess Charlene of Monaco showcased her signature understated style as she made an appearance at Paris Fashion Week.

The Monaco royal, 44, donned a navy ensemble as she sat front row at the Akris Womenswear show on Saturday.

The mother-of-two recently joined her husband Prince Albert at the Queen’s funeral and has stepped up her public appearances in recent months, following a long illness and stint in South Africa. 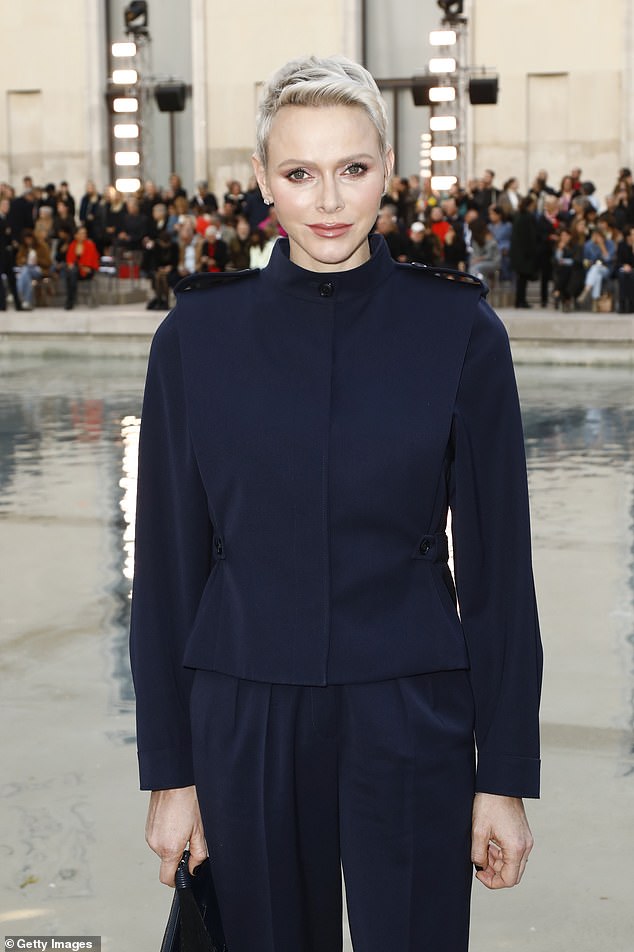 Princess Charlene of Monaco attends the Akris Womenswear Spring/Summer 2023 show in a rare public appearance without her husband part of Paris Fashion Week on October 01, 2022 in Paris, France 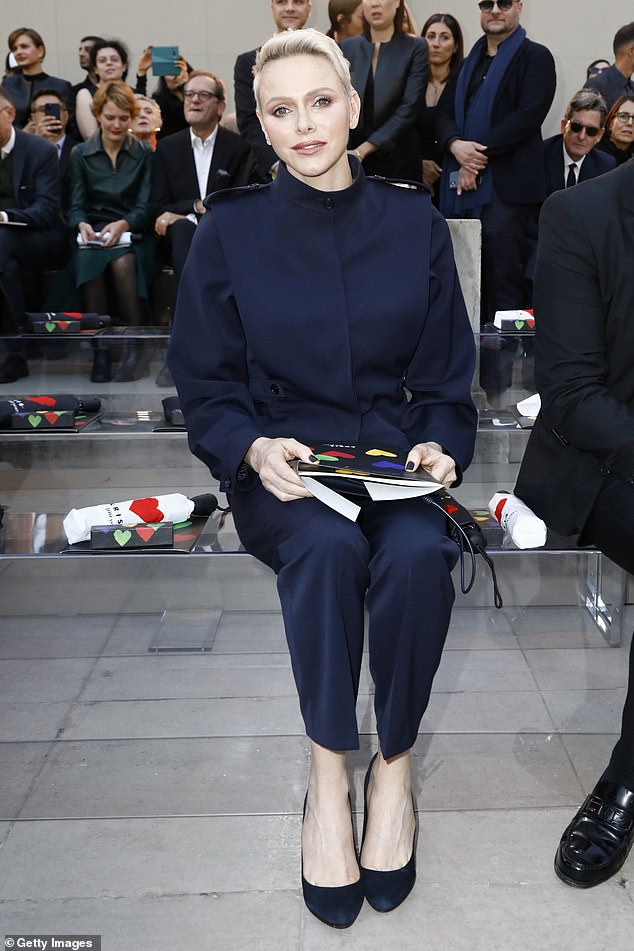 The Princess sat on the front row of the brand she was wearing, in a bold, navy military style suit and a clutch bag

On Saturday, she wowed fans with her solo appearance at Paris fashion week at the Palais de Tokyo to watch the runway show for Swiss fashion house Akris from the front row.

She was seen wearing a navy suit of the same brand which was featured on the runway in nude.

The royal Twitter account confirmed that the suit was purchased prior to the collection was unveiled to the public, by saying: ‘This piece from the collection before it was even presented, the suit is actually a recreation of a look originally designed in 1991.’ 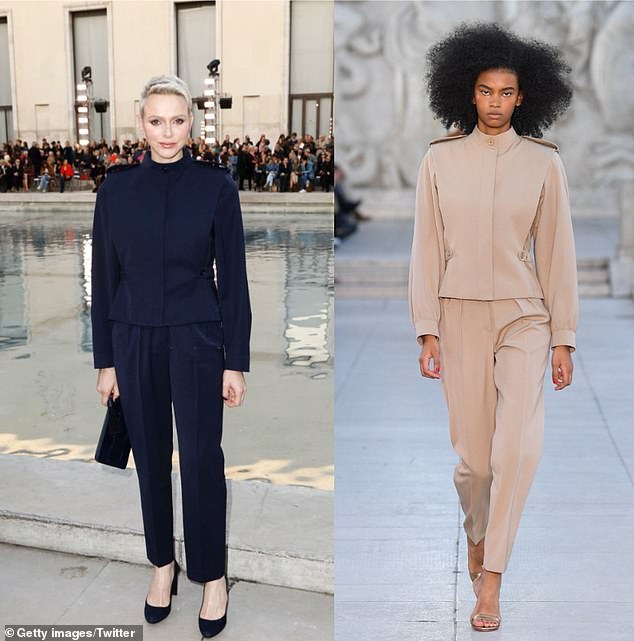 The navy suit Charlene worse with black heels and a black clutch, which was confirmed to be on the Akris runway show she was attending in nude 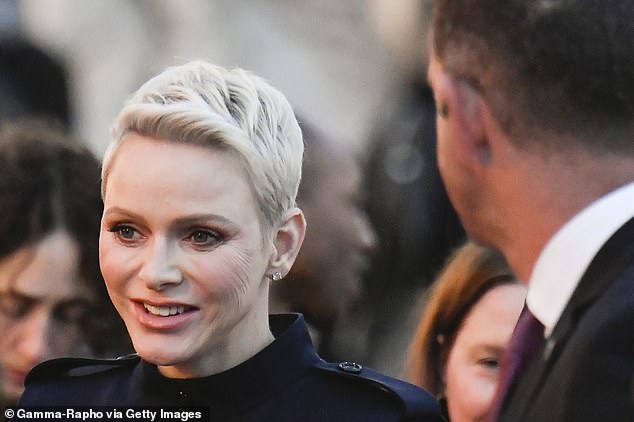 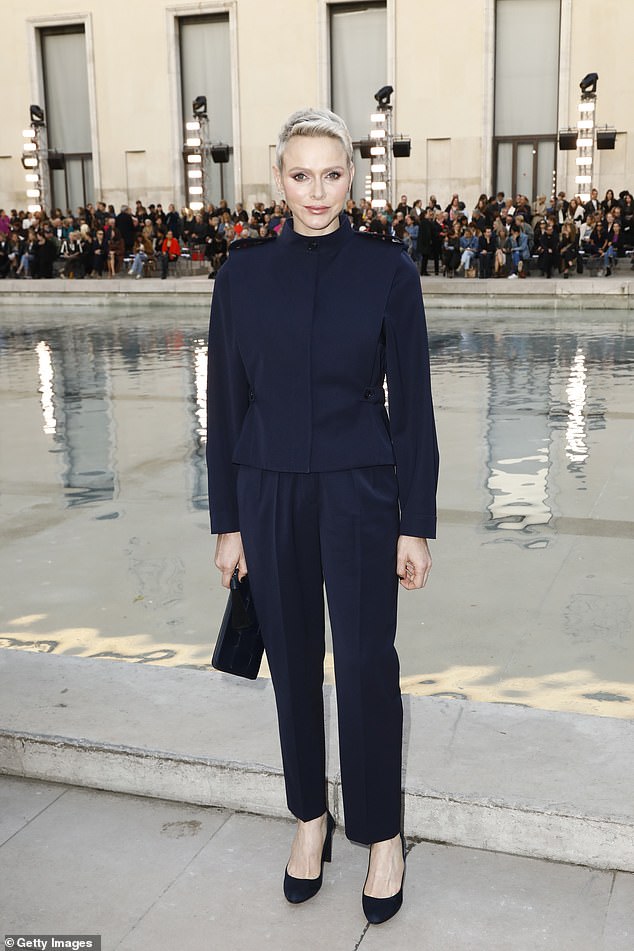 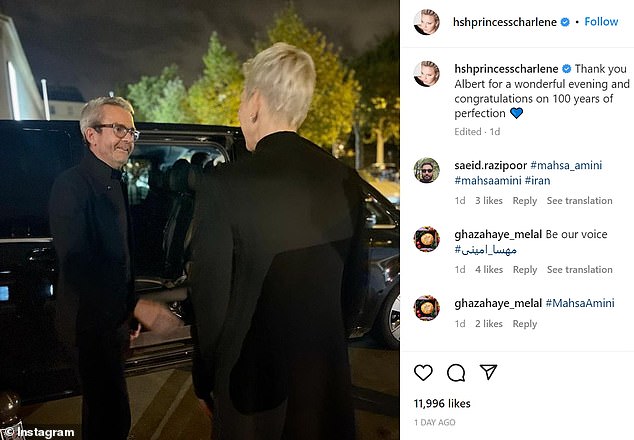 Her make-up was typically clean and polished looking, with a subtle pink eyeshadow  that perfectly suited her signature short blonde pixie cut with diamond studs to finish the look.

Charlene was seen mingling among the fashion set crowd and stunned royal fans with her rare appearance.

After her exit from the show she shared a sweet message on her Instagram account to the Akris designer Albert Kriemler saying: ‘Thank you Albert for a wonderful evening and congratulations on 100 years of perfection,’ as a nod to the brand’s celebration of a century of fashion, in an emotional gesture uncharacteristic of the princess.

Instagram fans gushed over Charlene’s look saying: ‘I love your hair!’ and ‘you make these clothes shine!’ 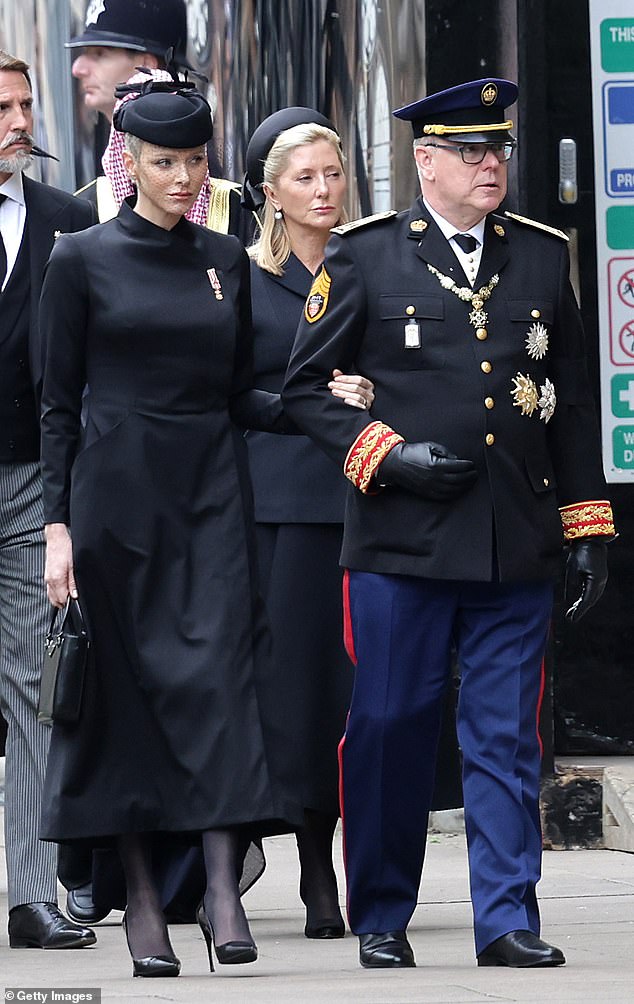 Another said: ‘Charlene, you and your daughter are like fashion models who look so beautiful in his clothes. You also stand for many important causes.’

Princess Charlene returned to public duties in May, making the occasional public appearance with her husband Prince Albert and her children Prince Jacques and Princess Gabriella by her side.

She posed with Albert for a portrait marking their 11th wedding anniversary, and joined him in taking her children back to school in September.

Charlene made her most high profile engagement last month when she joined her husband at the Queen’s historic funeral in London, joining 2,000 other mourners at Westminster Abbey.