This is the moment Prince William gleefully told a funny story to members of the congregation at St Thomas’s Church in Swansea during a visit to Wales today, alongside Kate Middleton.

The heir to the throne recounted that he had just met a woman in Anglesey who apparently used to give him his tea when he was on the train travelling up there, supposedly incognito.

He said, laughing and with a mock groan: ‘She said “I served you your tea a few times when you were on the Holyhead service”. I used to sit in the corner with my baseball cap on trying to be discreet. And she would come up and say “like a cup of tea sir?”‘

The group sitting around him laughed, lamenting his attempts ‘to be discreet’ as the Prince and Princess of Wales made an appearance at the church, which has been transformed into a thriving community hub for the city.

Kate and William were in Swansea as part of their first official Royal tour of Wales since receiving their titles and were in Anglesey, where they lived 11 years ago, this morning. 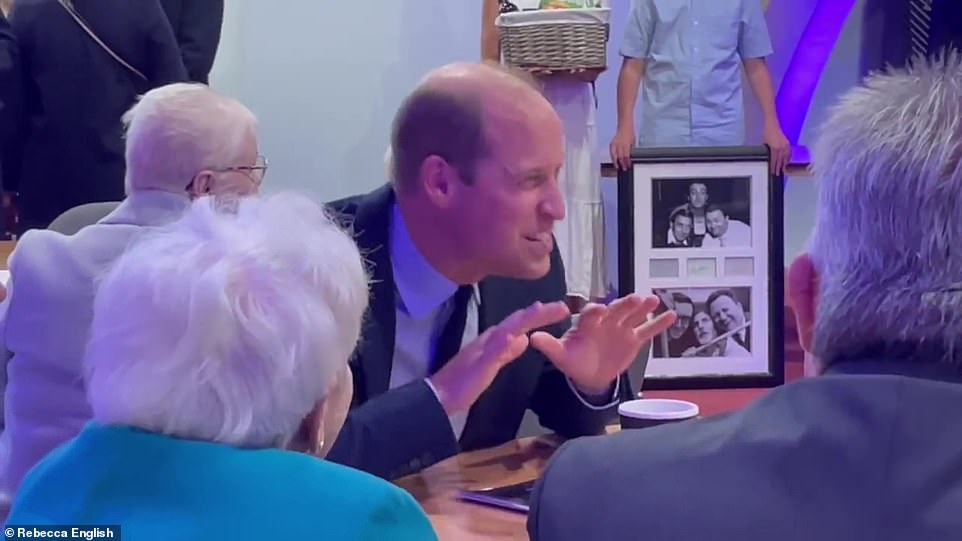 This is the moment Prince William gleefully told a funny story to members of the congregation at St Thomas’s Church in Swansea during a visit to Wales today, alongside Kate Middleton 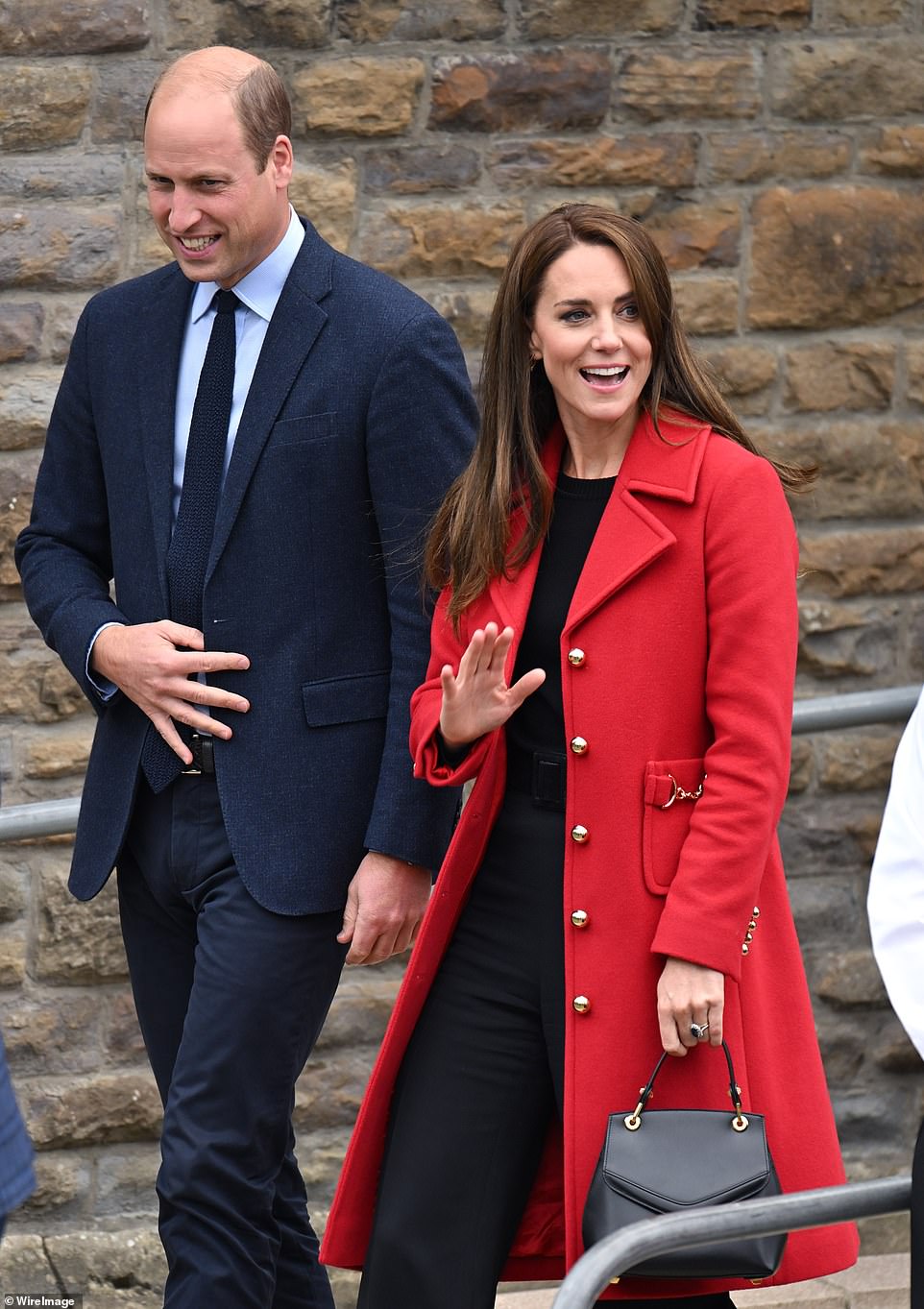 The heir to the throne recounted that he had just met a woman in Anglesey who apparently used to give him his tea when he was on the train travelling up there, supposedly incognito. Pictured, the Prince and Princess of Wales today

Meanwhile, Kate helped a two-year-old pack a donation basket for The Baby Basics bank during the visit to Wales today.

The Princes and Princess of Wales were enchanted with the antics of a little girl in – naturally – a Welsh national costume on a trip to St Thomas Church, Swansea.

Kate was spotted chatting to Charlotte Bunting as they put baby clothes and toys into a donation basket.

The cheeky toddler took out a pair of blue knitted booties Kate had been looking at and handed them to her, and then proceeded to lift up her feet and show the royal visitor her own adorable white Converse shoes. She then took out a plastic feeding bottle and gave it Kate, who hunkered down on her heels, laughing.

William came up to join them and Charlotte picked up the booties again and waved them at the prince. ‘Those are very sweet, tiny feet!’ he declared. 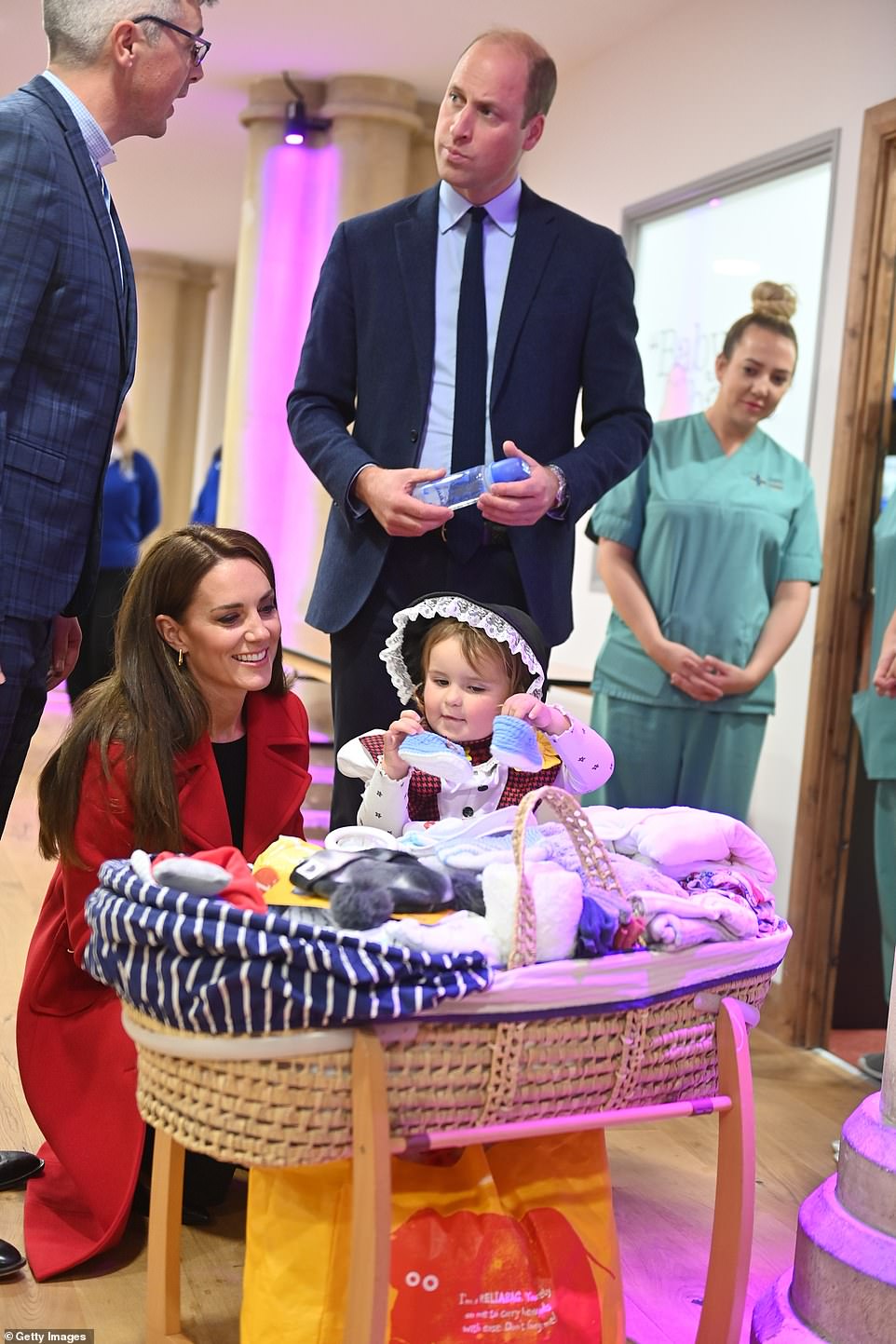 Kate Middleton helped an adorable two-year-old pack a donation basket for The Baby Basics bank on Tuesday alongside her husband Prince William at St Thomas Church, in Swansea, Wales 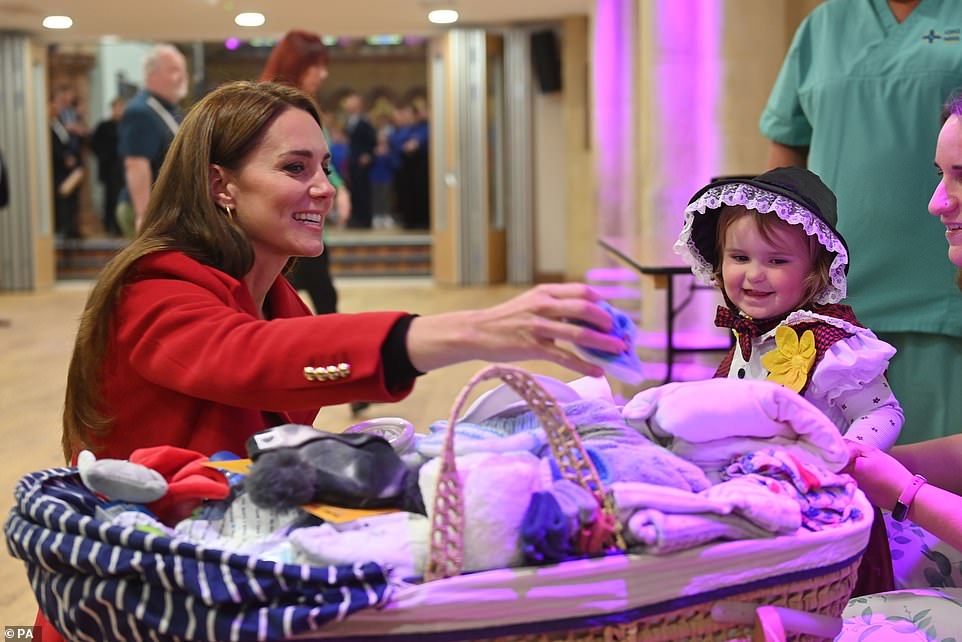 The Princess of Wales was spotted chatting to Charlotte Bunting, who donned a traditional Welsh dress, as they put baby clothes and toys into a donation basket 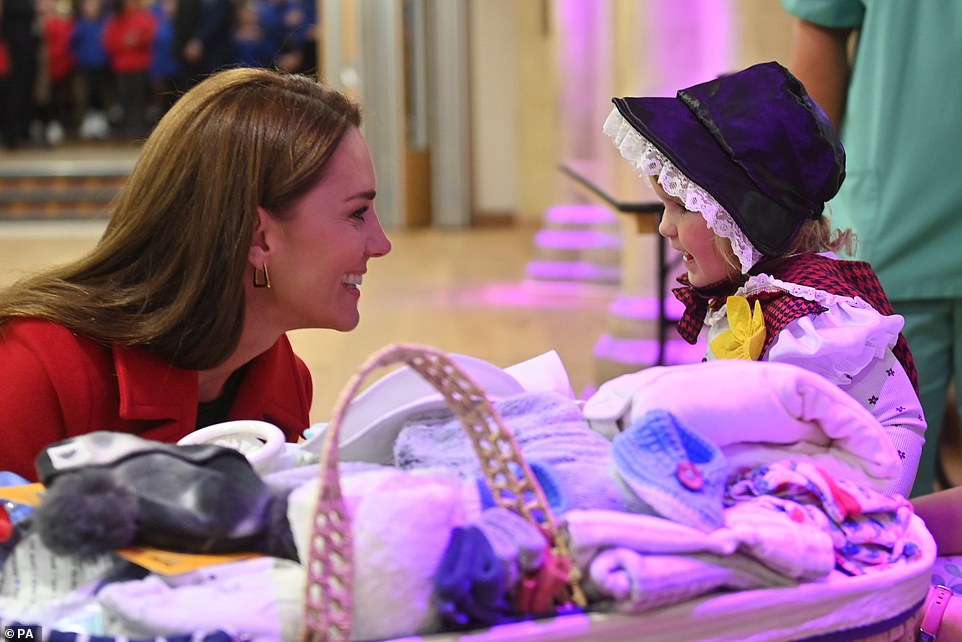 As the couple chatted to to Rachel, Charlotte’s mother, the little girl showed them a rattle and then picked out a blue bottle of shampoo and offered it up to the princess.

Kate, like any good mother, quickly took off the lid and opened it up to have a smell, offering Charlotte a sniff too.

‘She’s going to get all the tours out now. Very sweet,’ William, told her mother. ‘That’s quite possibly the sweetest outfit I have ever seen.’

At the end of the visit, however, Charlotte got one more chance to meet her heroine, giving Kate a posy of flowers and suddenly flinging her arms around her for a hug when the Princess bent down to take them.

Charlotte’s father the Reverent Steven Bunting is vicar at St Thomas’s Church which has been transformed into a thriving community hub for the city.

It now boasts a food bank that supports more than 200 people, Swansea Baby Basics, which distributes essential items for vulnerable mothers including toiletries and clothes, facilities for the homeless including food, showers and toilets, a not-for-profit cafe and a community training kitchen and a surplus food distribution network.

Rev Bunting was recently given an MBE by Prince Charles, as he was then, for the work he has done.

The former Prince of Wales had been due to visit the church in February but was forced to cancel his visit because of bad weather. The new prince and princess were shown a plaque that had been made to mark his visit, as well as one of their own, and given gifts to take home to the now king. 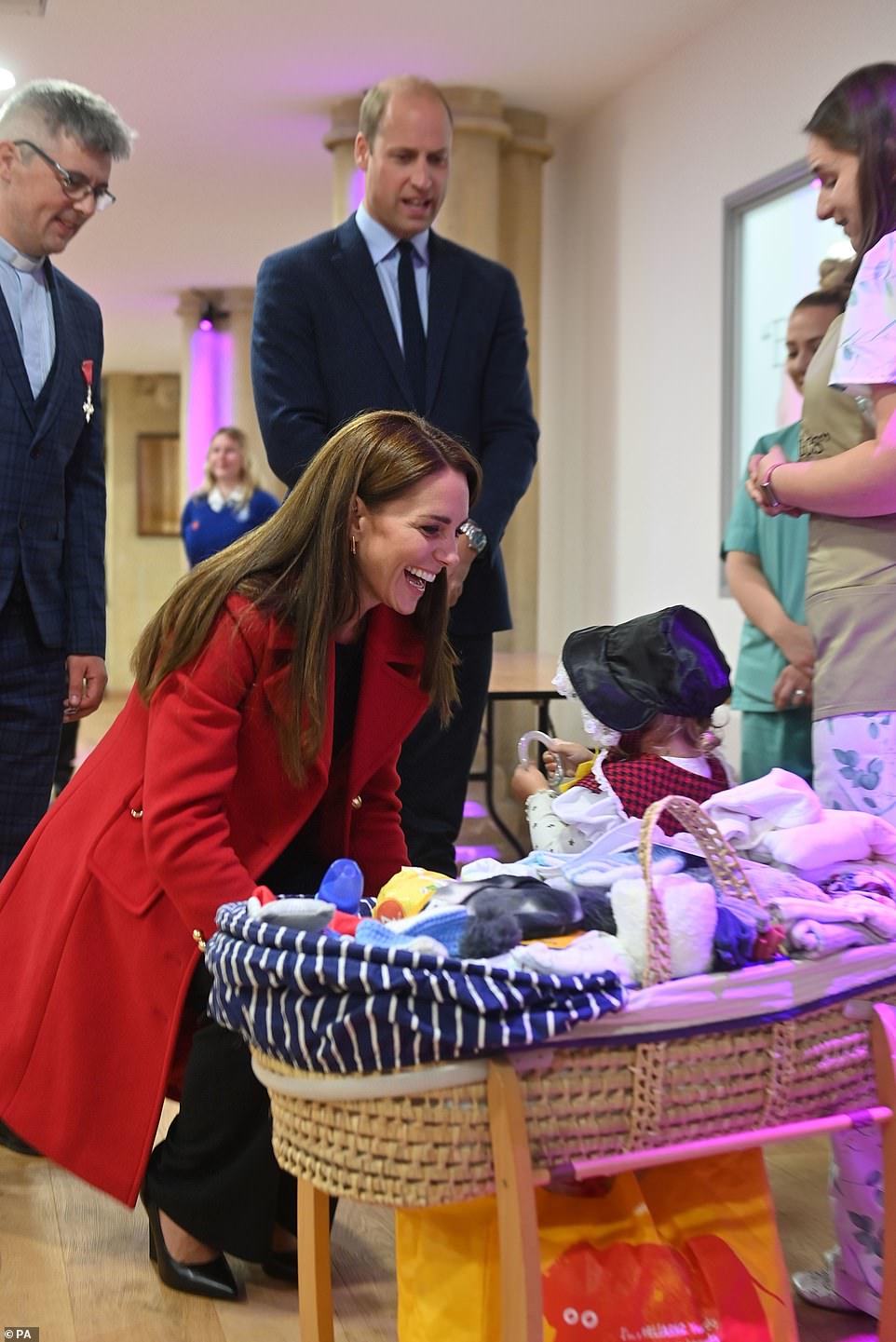 Princess of Wales beamed at Charlotte Bunting, aged two, who was dressed in the Welsh national costume 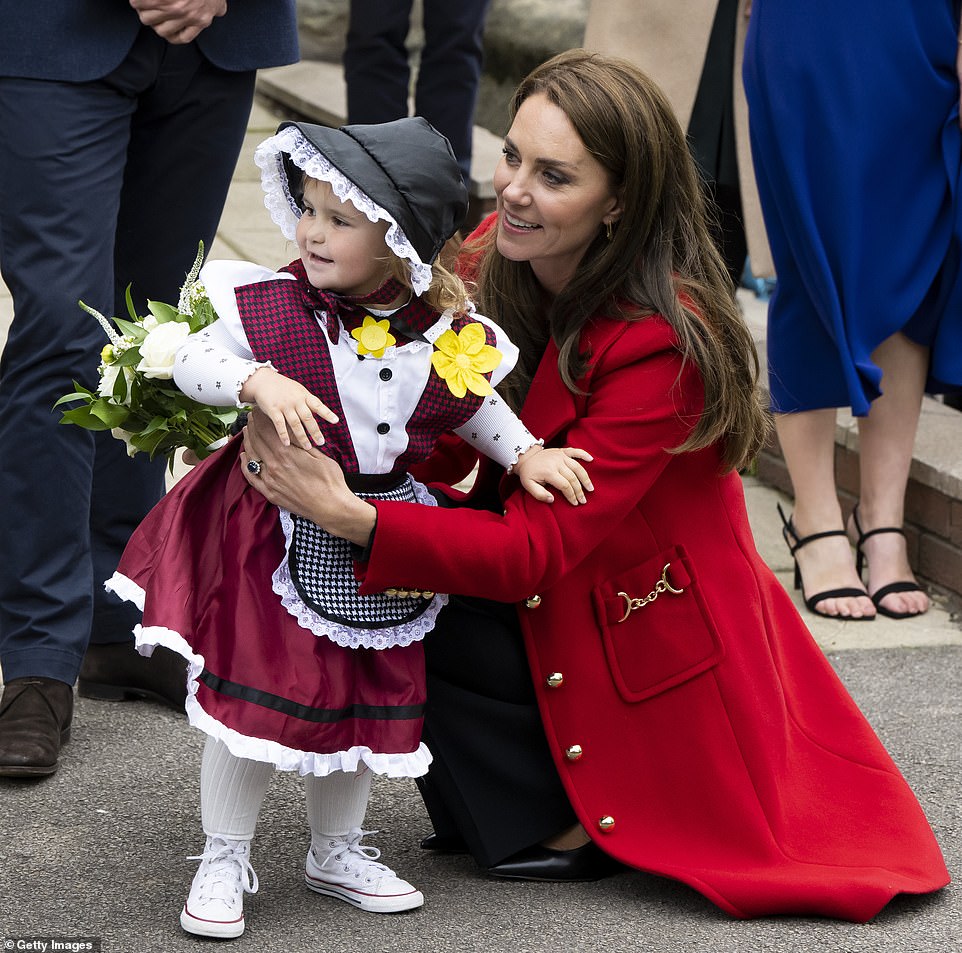 As the royal arrived at the community church, Charlotte greeted her with a beautiful bouquet of flowers 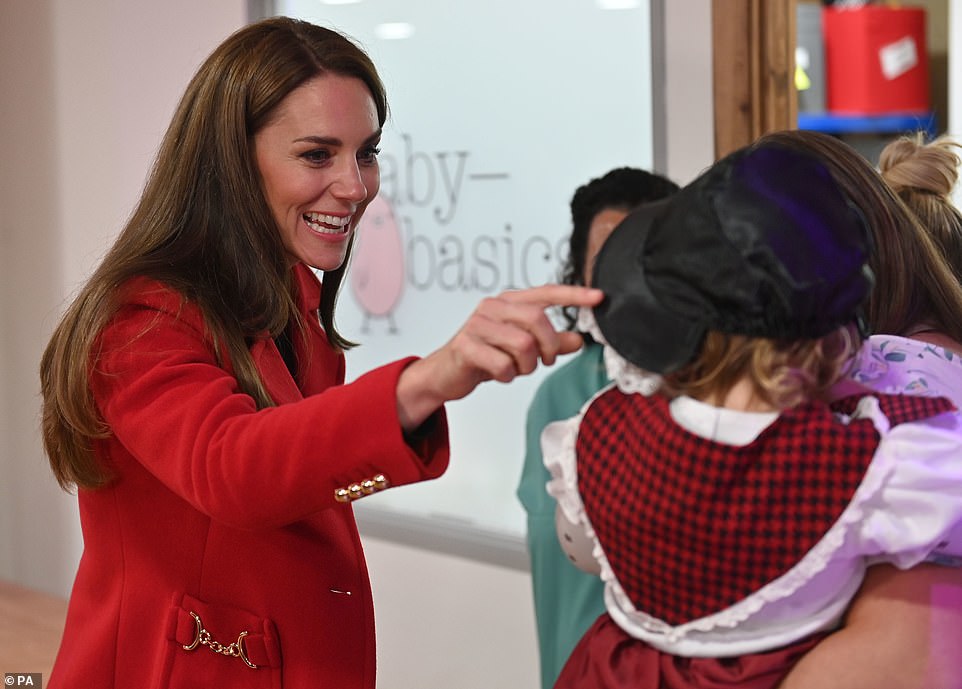 As the couple arrived the church bells rang out ‘God Save The King’, only marginally louder than the shouts and cheers that greeted them.

Inside they met a small line-up of dignitaries, William telling them: ‘I’ve been brushing up on my Welsh. All the little snippets, I’ve got to remember them.’

They were entertained by the St Thomas’ School Choir, who had also practiced for the king’s earlier aborted visit, with the princess telling them: ‘It’s a great place to sing, isn’t it? The acoustics are incredible. I’ll have to tell him what beautiful voices you’ve got so maybe he can come and hear you another time.’

The couple popped in to meet some children learning about baking in a small church kitchen. ‘That looks amazing,’ said William. ‘What do you like cooking at home. Cookies, that always goes down well. I do a good breakfast, sausage, bacon and eggs.’

While the prince went to chat with food bank volunteers and help back a bag with essentials, Kate went to the Baby Basics section.

Her little friend Charlotte was there with her mother, Kate telling her: ‘I have a Charlotte too. My Charlotte is at school with George and Louis and her friends. Do you go to school?’

Later the couple went upstairs to meet long-standing members of the church’s congregation. 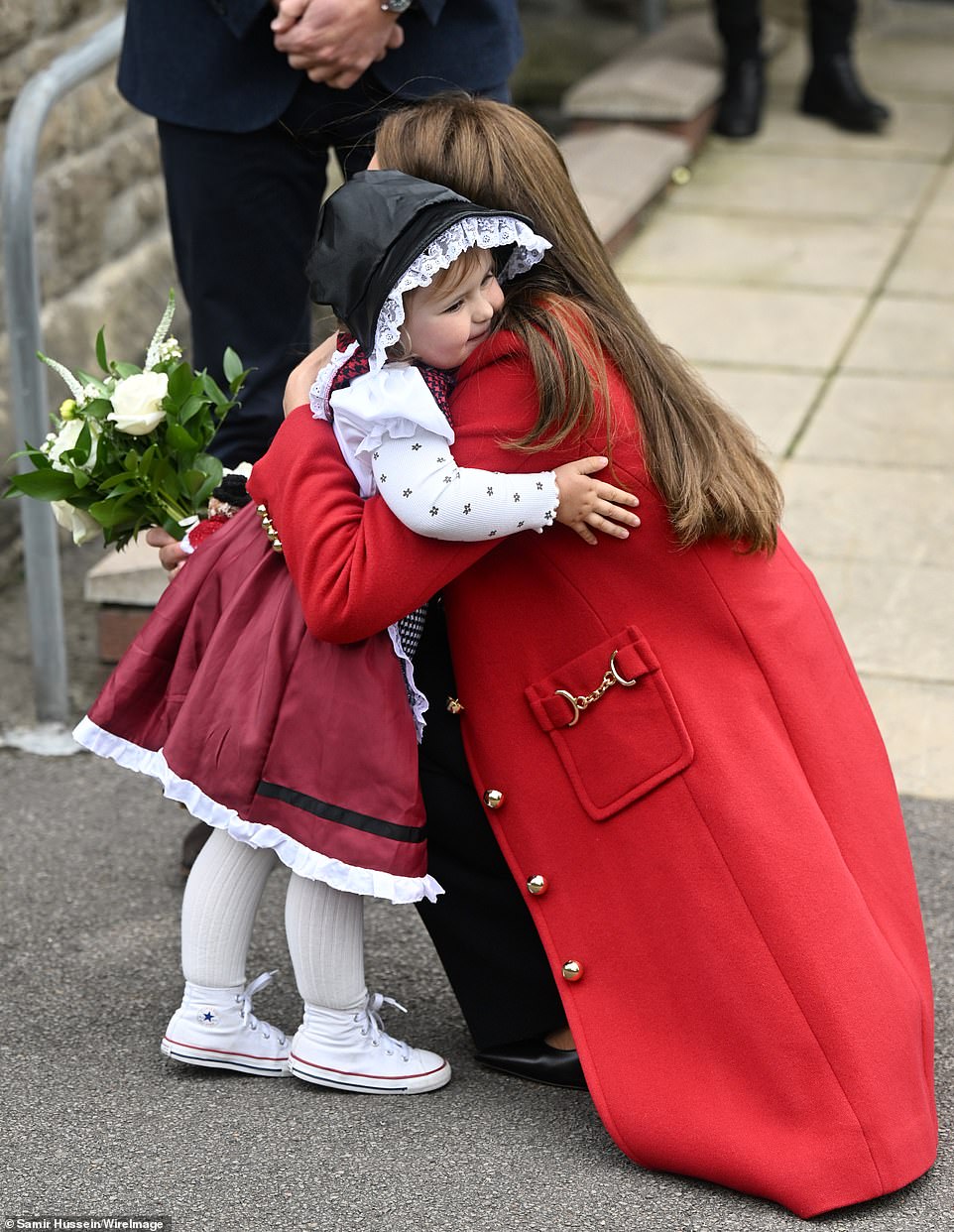 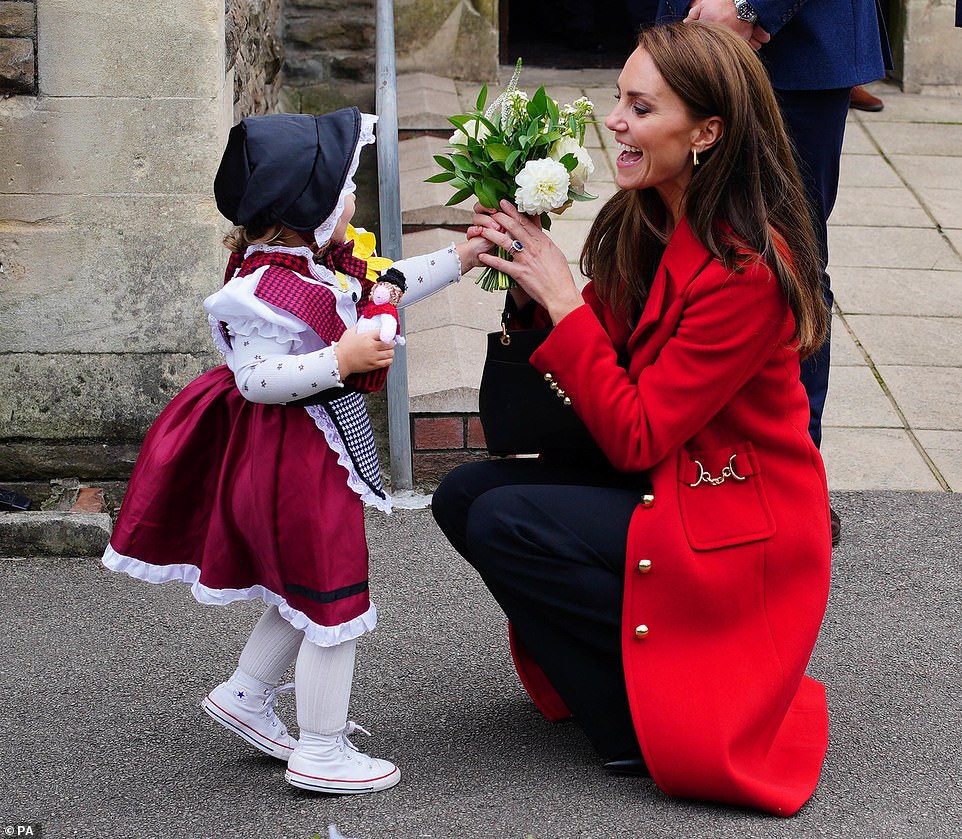 Kate animatedly chatted with a group of elderly worshippers, telling them: ‘What’s so wonderful about this place is that there is such a good mixture of young and old. It’s extraordinary. You have 90-year-olds as well as youngsters. It’s a real family organisation.

‘We need places like this to bring people together, places where people can come and engage. It’s what we need post Covid and with the cost of living crisis. Lots of people are too scared to come an engage so it’s wonderful that you go out to see them too.

‘Places like this are so needed. They bring people together, help them to connect, it’s what we have missed since Covid. All gathering together under one roof. We all could do with a church like this where we live. I must come to a service once day. It’s so remarkable here.’

William praised Rev Bunting for the work he had done building it into a community hub, saying: ‘He’s doing an amazing job. I know I’m going to embarrass him here. It’s so important to have a local leader to rally round, leadership in the community is the answer. Round the country, if every community had someone like Steven…’

Outside the church a huge crowd had gathered to meet the couple, many bringing hastily bough flowers to give to the new Welsh princess. 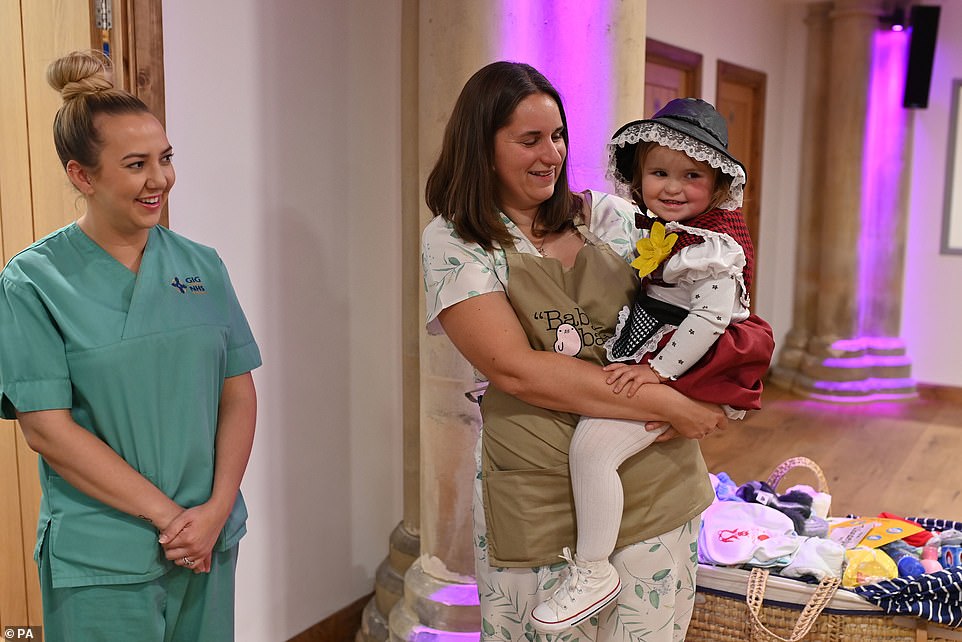 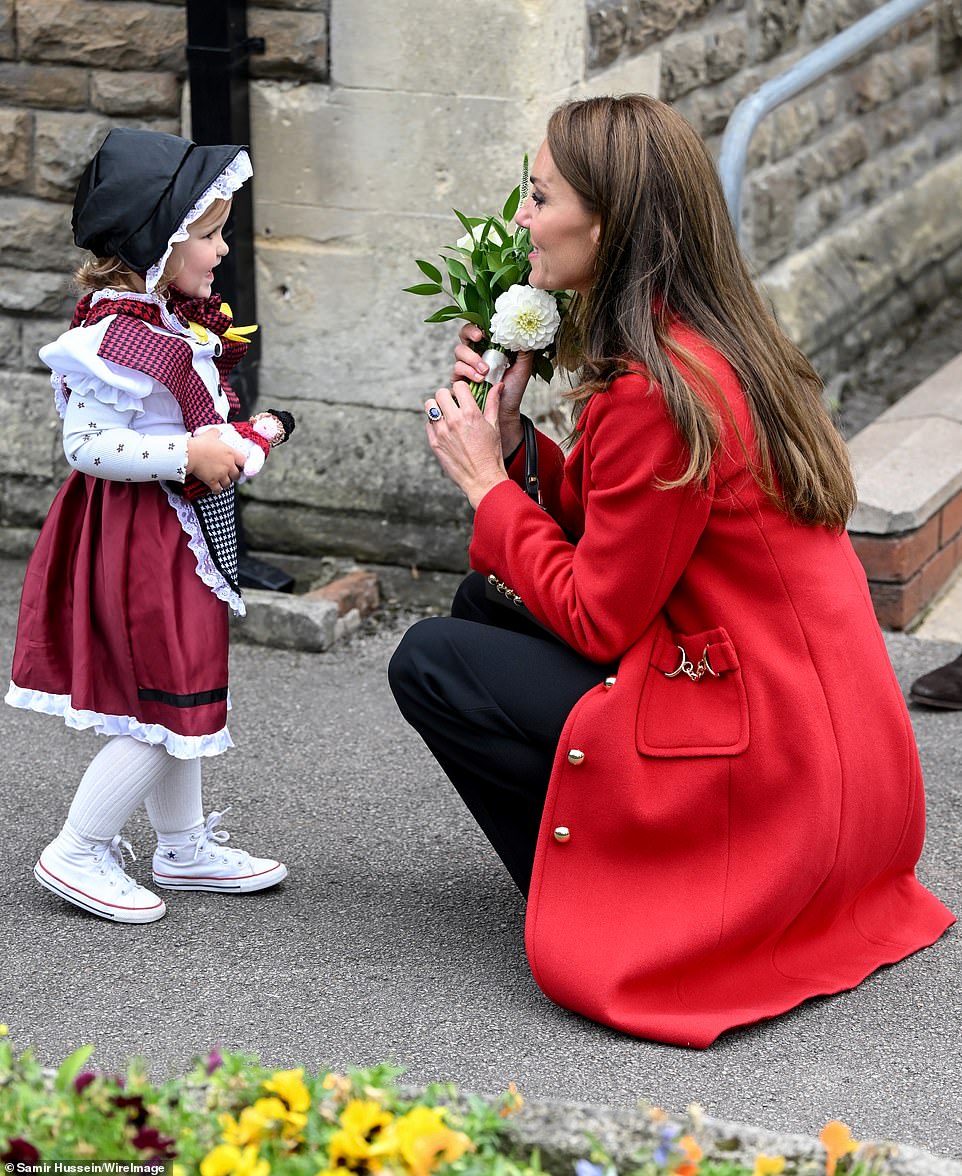 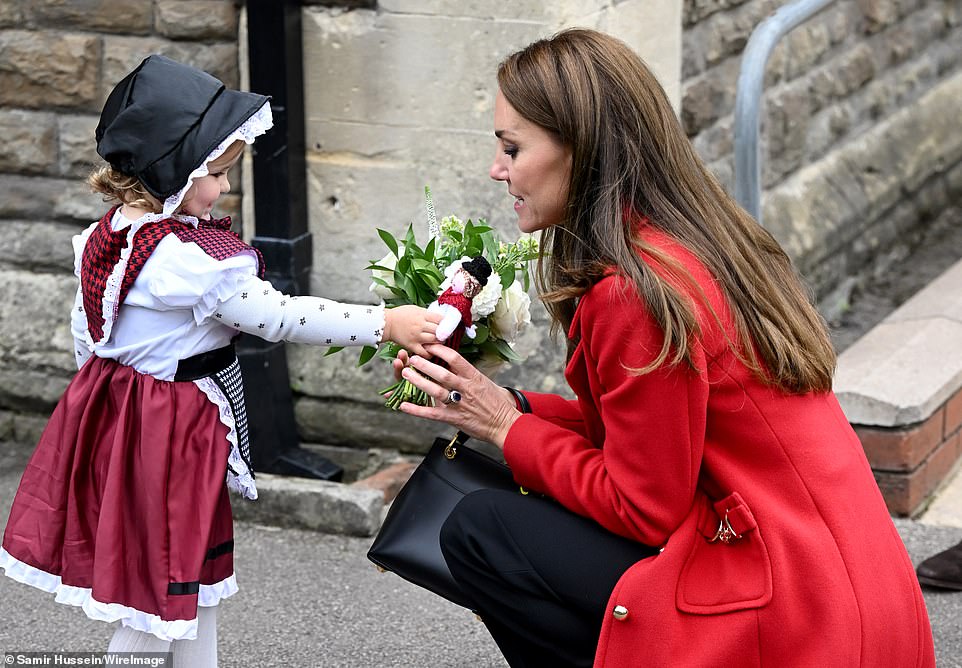 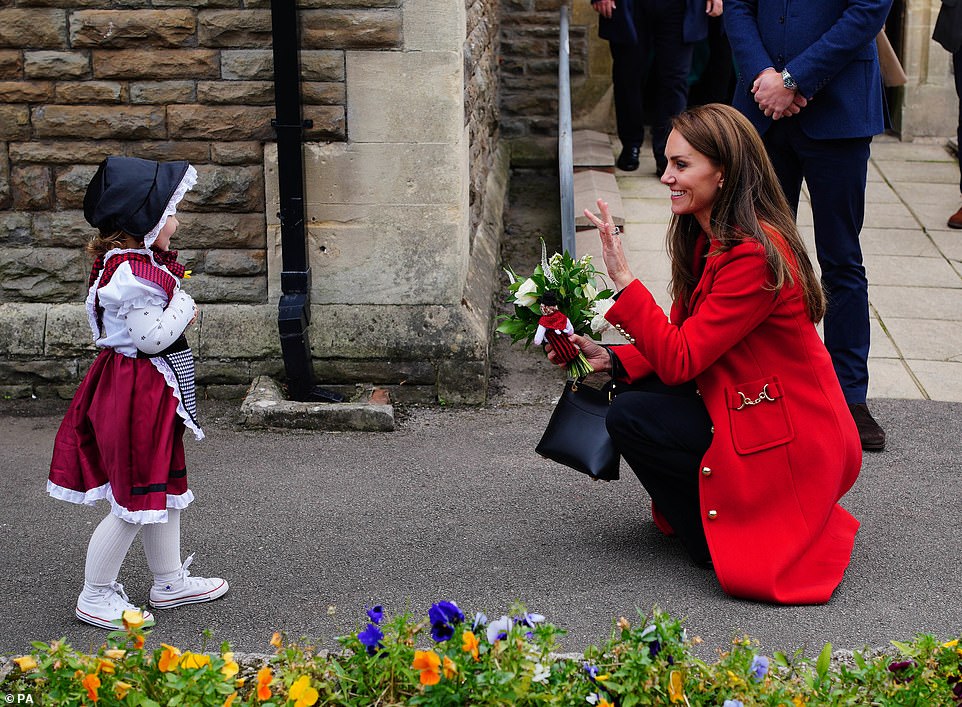 William and Kate spent more than half an hour chatting to as many people as possible, shaking hundreds of hands and gamely posing for endless selfies.

Lucy Jones-Hugh, 16, told the princess that they shared the same birthday and Kate insisted an aide take down her details so she could send her a card.

Georgie Collins, 51, from Nottage, near Porthcawl, shook both of their hands and told William: ‘Welcome to Wales!’

Mrs Collins said afterwards: ‘I wanted to welcome them as the new prince and princess. They were so lovely and charming and I couldn’t believe how long they took meeting people and chatting to them. They are an incredibly natural couple and took such an interest in everyone they met. ‘

Janet Harbotte, 63, from Baglan, said: ‘They deserved such a warm welcome. What a wonderful couple. She was a sweetheart and he was so charming. I think he should have a proper investiture as Prince of Wales. I watched his father’s. I think they are exactly what the country needs.’

Rebecca Taylor, 35, a teacher at St Thomas’ Primary School, posed with her daughter, Mali, three, for a selfie with the couple. ‘They couldn’t have been nicer,’ she said. ‘They never said no to anyone. So lovely.’

Rev Bunting said after the visit: ‘What a wonderful day. We know they love Wales, they have visited the country, lived in the country and on day one after royal mourning has finished have put down a marker and visited. How superb.

‘William tried out a bit of Welsh, he said ‘paned’ which means a cup of tea. They spoke to absolutely everyone and, more importantly, listened to their stories. What a brilliant way to start their new roles.’ 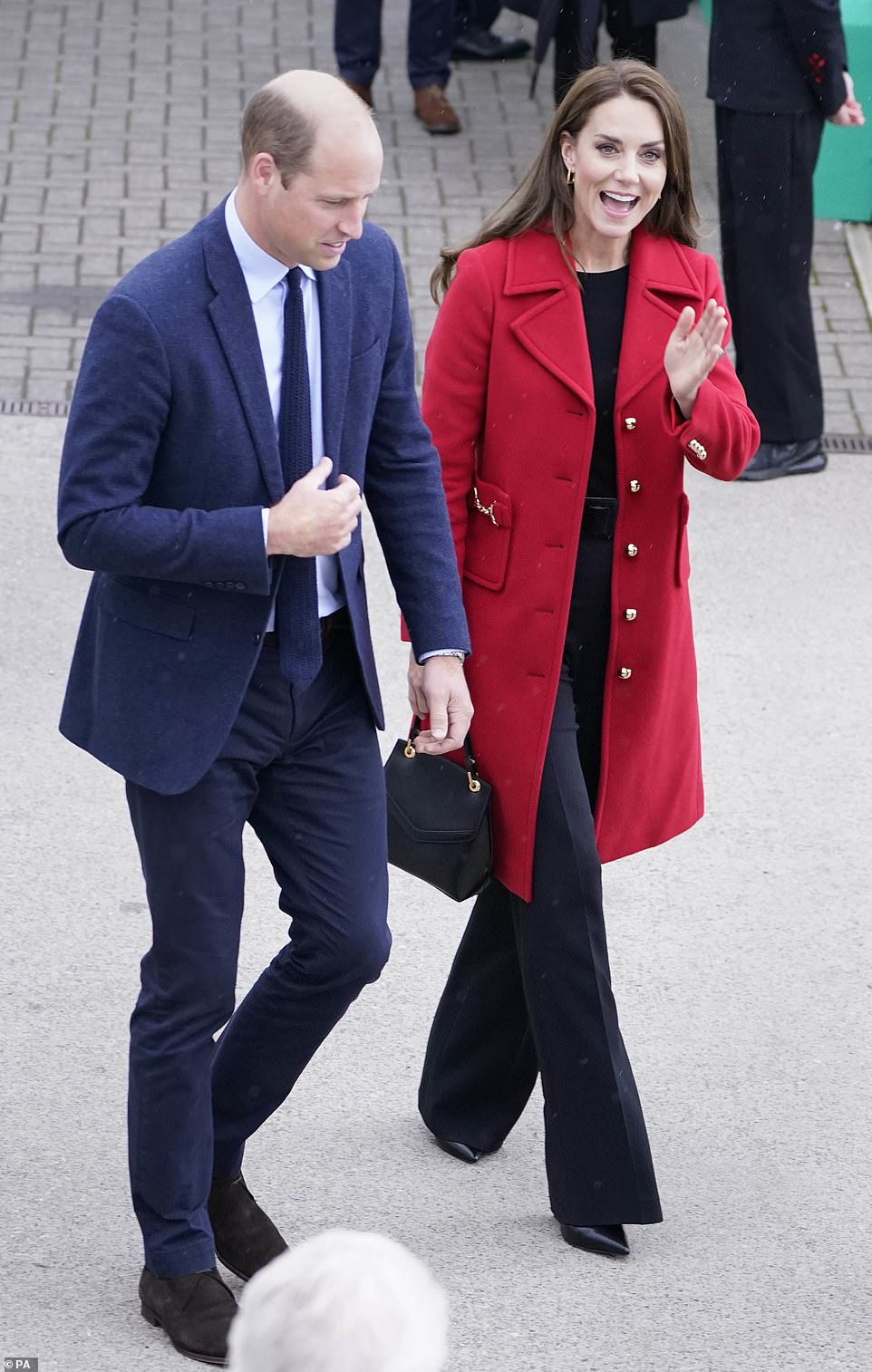 Kate  opted for a L.K. Bennett’s ‘Spencer’ coat in red as she and Prince William visited Wales for the first time as Prince and Princess of Wales 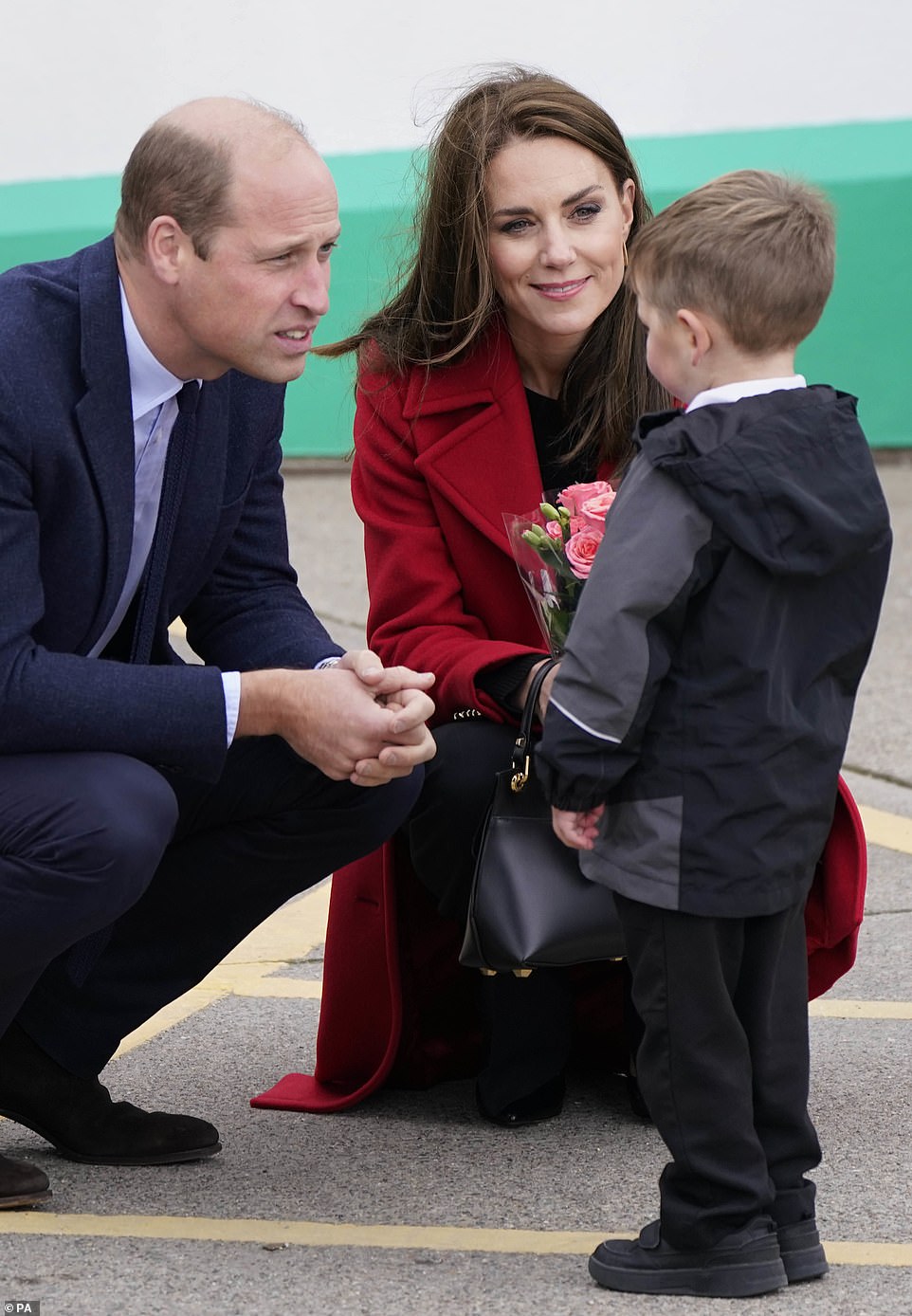 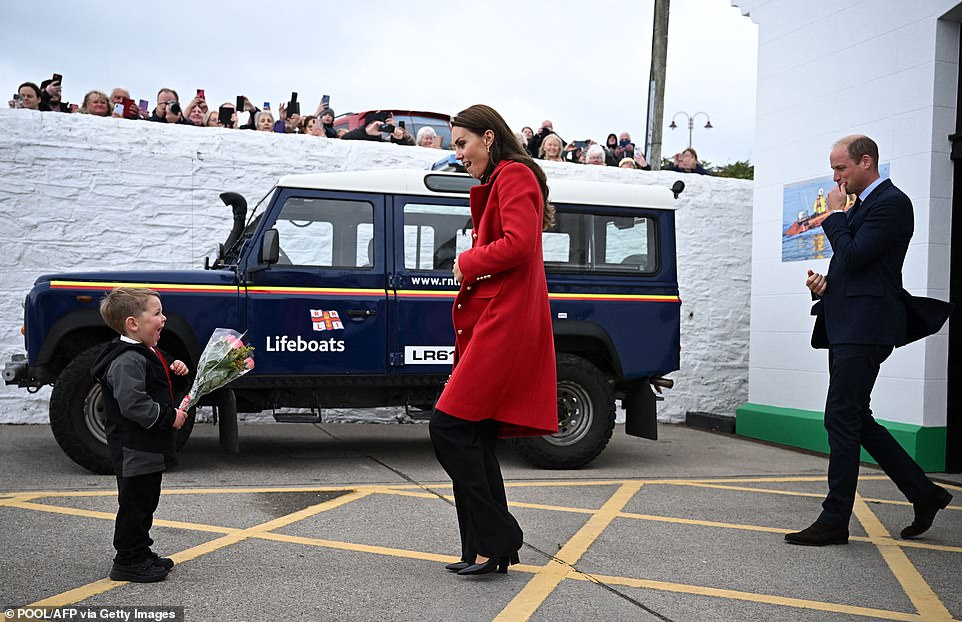 Prince William watched as his wife Catherine, was presented with a posy of flowers by four-year-old Theo Crompton during their visit to the RNLI

Adding a touch of glitz to her ensemble, she also donned Welsh brand Spells of Love’s £79 ‘Alia Hoops’ in 18ct Recycled Gold.

Earlier in the day, William and Kate visited the RNLI Holyhead Lifeboat Station in Anglesey. The visit comes as the royal family have concluded their period of mourning for the Queen.

The princess looked in her element in the tailored coat, which is from the designer’s Conscious collection, and crafted by Manteco – the leading textile company for sustainability and high-end fabrics.

She paired it with high waisted flared trousers and a slim black leather belt and a boat neck top, and added a touch of bling with thick gold hoop earrings from Welsh brand Spells of Love, which she has favoured in the past.

Kate looked relaxed at the event, where she sported natural makeup with a dash of bronzer and mascara, a sculpted brow and a pink lip.

Kate and Prince William were made Prince and Princess of Wales by King Charles III on September 9, a title reserved for the heir apparent of the monarch.

The Prince and Princess of Wales visited their home in Anglesey in their first trip to the nation since taking up their titles.

William and Kate journeyed the length of Wales today, first visiting Holyhead in Anglesey, North Wales, and then travelling to Swansea in South West Wales.

Following King Charles’ announcement on 9 September that William and Kate would become Prince and Princess of Wales, the royal couple had promised to visit at the earliest opportunity following the death of the Queen, as a way of ‘deepening the trust and respect’ they have with the people of Wales.