Chuckling Charles! Prince of Wales shares a laugh with Secretary of State for Business Kwasi Kwarteng as he is joined by Sophie Wessex and Princess Anne for awards reception at Windsor Castle

Prince Charles appeared in high spirits as he hosted an evening reception for winners of  Queen’s Awards For Enterprise at Windsor Castle tonight.

The Prince of Wales, 72, looked smart in a navy pinstripe suit as he joined the award recipients at the event and could be seen chatting with Secretary of State for Business Kwasi Kwarteng.

Rather than his usual namaste greeting, the two men shook hands and appeared to share a joke with one another as they met.

The royal was also joined by Countess Sophie Wessex and his sister Princess Anne at the engagement this evening. 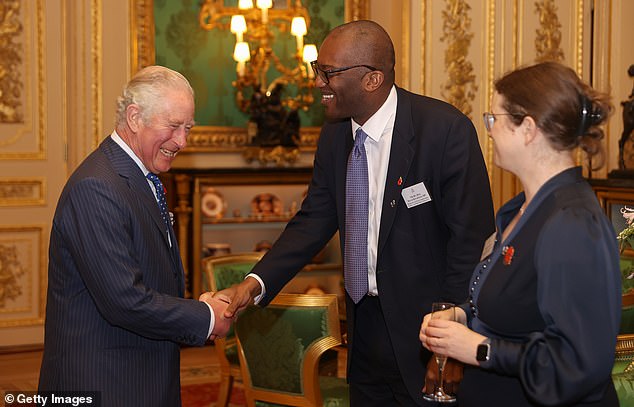 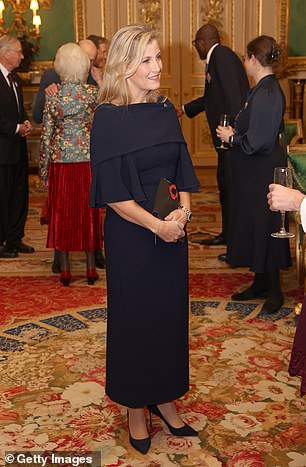 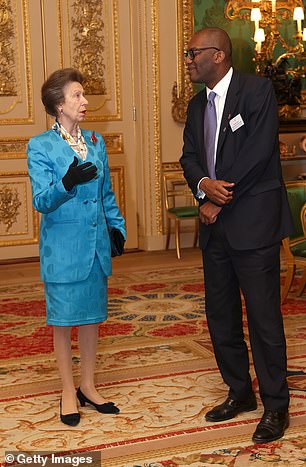 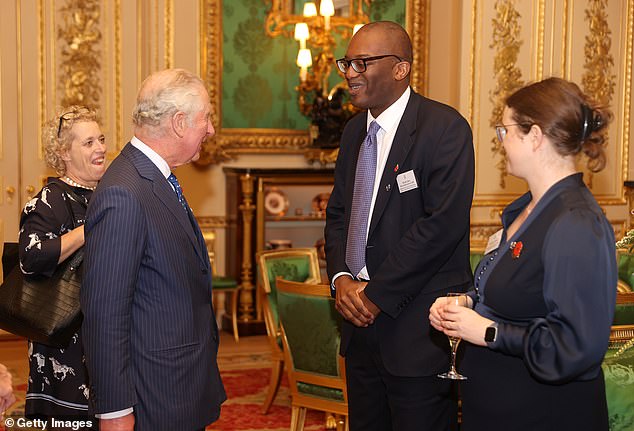 The Countess cut an elegant figure as she arrived at the reception at Windsor castle, donning a floor length black gown for the occasion.

The mother-of-two wore her blonde locks in loose waves over her shoulders and carried a black handbag embroidered with red poppies.

Meanwhile Princess Anne opted for a vibrant turquoise suit for the occasion and could be seen gesturing around the room as she chatted with attendees.

Charles attendance at the evening reception comes after a busy day for the royal, who earlier made Sir Elton John a member of the Order of the Companions of Honour. 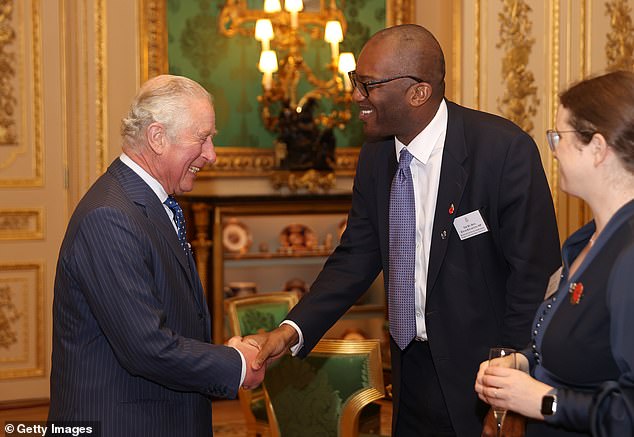 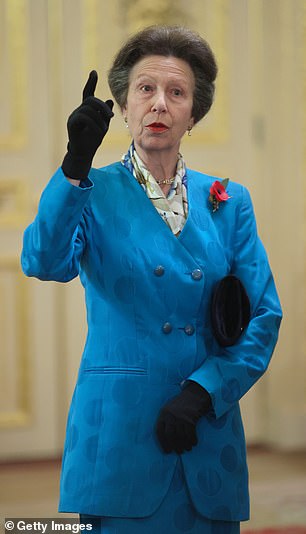 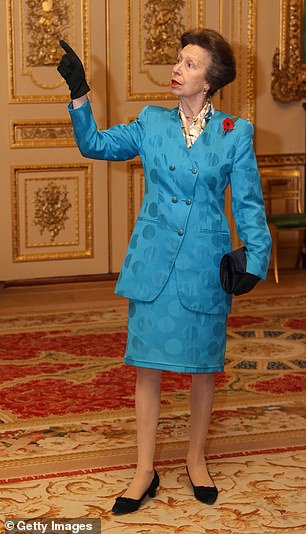 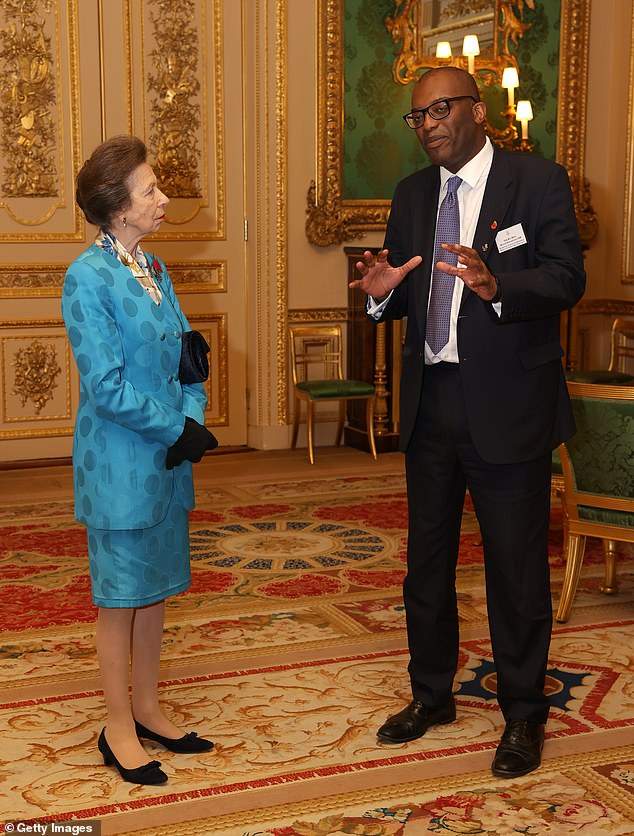 Charles, 72, was pictured chatting with Sir Elton as he presented him with the award. He pointed to his stick, which the singer is using after an injury that he says has left him ‘unable to move sideways’.

The 74-year-old, who was knighted for services to music and charity in 1998, has sold more than 300 million records worldwide during a pop career spanning more than five decades.

It comes days after The Queen returned to Windsor Castle by helicopter following a short break at Sandringham as she continues her rest ahead amid her determination to be fit for Remembrance Sunday this weekend.

The 95-year-old monarch was photographed taking off in a Sikorsky S76C, known as The Queen’s Helicopter Flight, at about 11.15am yesterday – five days after arriving at her Norfolk country estate on Thursday last week. 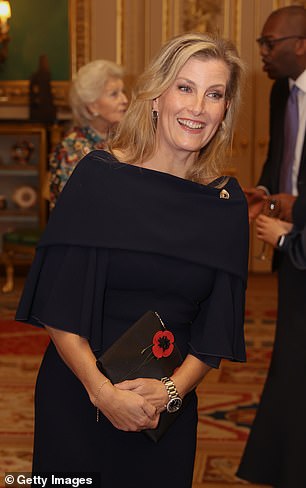 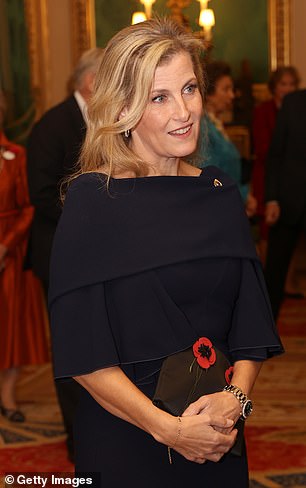 The Countess cut an elegant figure as she arrived at the reception at Windsor castle, donning a floor length black gown for the occasion

Witnesses said the helicopter landed at Sandringham at around 10am, before the Queen was driven through the estate towards it. A Notam (notice to airmen) was put in place, meaning no one else was allowed to fly in the area.

Then, the helicopter worth around £5million was then seen landing at Windsor Castle and the Queen was driven through the grounds of her Berkshire residence in a Range Rover following her return.

It comes after the head of state was pictured being driven through Sandringham in a Range Rover A-Bio Sdv8 diesel vehicle over the past several days – including yesterday, last Saturday and last Friday.

She flew to the country estate by helicopter last Thursday from Windsor, where she has been resting following her overnight stay in hospital last month as she continues her recuperation. 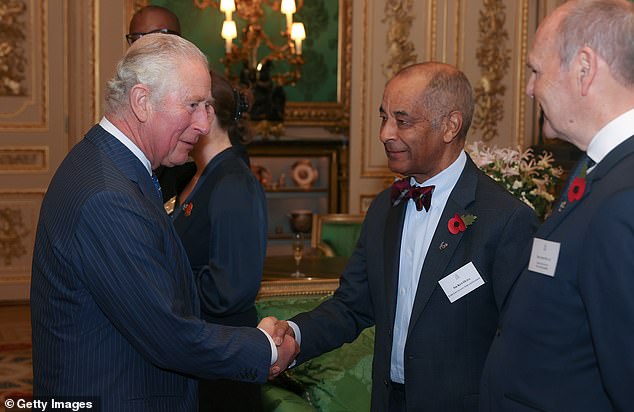 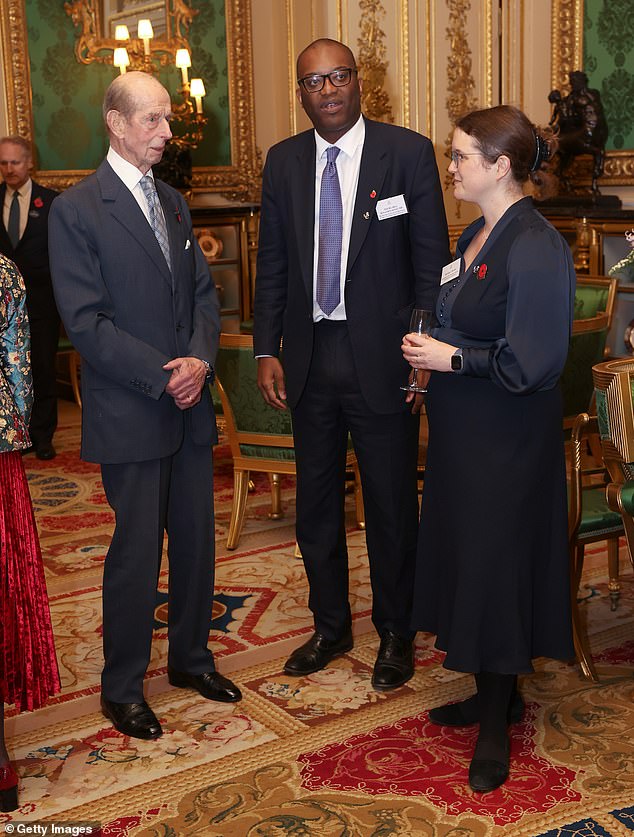 The Queen visited Wood Farm at Sandringham, which she used to visit annually with Prince Philip around this time of year, while she has some time off after doctors advised her to cancel all official visits for a fortnight.

Buckingham Palace previously said it is the Queen’s ‘firm intention’ to attend the annual Remembrance Sunday wreath-laying service at the Cenotaph in Whitehall this Sunday to honour Britain’s war dead, which is one of the most sacred events in her annual calendar. It would be her first in-person event since a reception on October 19.

A fortnight ago Her Majesty pulled out of a planned visit to the COP26 climate change conference in Glasgow and instead recorded a video message from Windsor, which was played to world leaders on Monday of last week.

And her 105-mile flight back to Windsor today comes after insiders said the Queen was determined to host her family at Sandringham for Christmas this year after the pandemic forced them to scrap last year’s event.

Buckingham Palace has refused to comment officially on the Queen’s long weekend away, although a royal source confirmed to MailOnline today: ‘The Queen has returned to Windsor Castle from her private weekend away.’