Day after day, for months on end, NSW Premier Gladys Berejiklian has been delivering the same simple message.

The most mild of symptoms should prompt all of us to get a COVID-19 test and stay home until we get a negative result from NSW Health. The government’s own guidelines could not be any clearer. 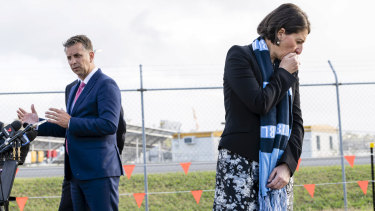 Premier Gladys Berejiklian, the day after receiving her negative test, says she “should have closed her door” while awaiting her COVID-19 results.Credit:Rhett Wyman

"Can I go to work or school? Can I have visitors? No. Home isolation means you must stay at your home or accommodation and restrict your normal activities," the guidelines state.

"You cannot go to work, school, childcare, university, recreation facilities, public areas, or go shopping." But it seems those rules do not apply to the Premier.

Battling a hoarse voice during a parliamentary sitting week, Berejiklian did not stay home but rather went to work and then later had a test to ward of the obvious questions which would come her way.

Given a "scratchy throat" requires a test according to Berejiklian, then so does a hoarse voice.

But the Premier did not go home, instead she stayed in Parliament for two hours and was in contact with people, later claiming she "should've closed my door and not had anything to do with anybody."

Berejiklian's assumption that she was free to continue working while waiting for her test result, which was negative, is an insult to the millions of residents who have duly followed her advice.

Her office says "at no stage did the Premier have COVID-19 symptoms, and therefore did not require a test. However, as the Premier began losing her voice, she took a precautionary test". Who is the Premier to self-diagnose, especially given she has been at pains to tell us that even asymptotic people can have the virus?

NSW has managed to get on top of coronavirus because the state's residents have listened to the Premier and followed her clear urging to do the right thing.

There is no doubt she has been the most competent leader in Australia during the pandemic. She has made courageous decisions and not shied away from difficult ones. NSW is the envy of the country.

But that does not give the Premier free rein to ignore her own orders. Rather, she should be leading by example not flouting the rules.

It is still dumb-founding to some of her colleagues – including her allies- that Berejiklian managed to survive her corruption inquiry appearance where it was revealed she had been in a five-year "close personal relationship" with now disgraced MP Daryl Maguire.

Her defence was she "stuffed up" in her personal life. It was a mammoth stuff up.

Berejiklian's popularity – she has a 64 per cent approval rating according to a Herald/Ipsos poll – no doubt saved her and she managed to convince the public that hers was a tragic love story.

But just like with the Maguire saga, popularity does not preclude you from doing the right thing and once again the Premier has shown poor judgment.

There cannot be one rule for Berejiklian, and another for the rest of us.