We tell children that they can be anything they want to be—but Oprah believes we can only be what we’re meant to be. In the case of Ugandan-born British actress Sheila Atim, Oprah may have it exactly right. Atim, 31, who is also a singer and playwright, has spent her life learning to lean into her passions—and whenever she has been hesitant to do so, external forces have conspired to lead her down the right path.

That was Atim’s outlook when her dream of becoming a doctor faded—she recalls that she wasn’t granted any interviews to attend medical school, despite excellent grades and a stellar application. Deeply disappointed at the time, Atim now knows that the outcome worked in her favor. “It was divine intervention,” she says, “pushing me to where I’m actually supposed to be and what I’m supposed to be doing.” 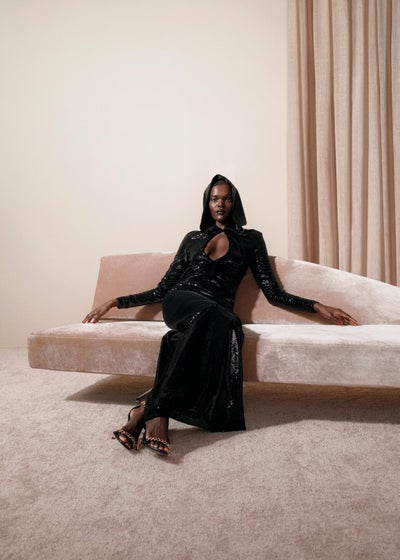 Though she had earned a degree in biomedical science, in the aftermath of her rejection from medical school, Atim figured she’d pursue a career as a vocalist, since music was her first love. But as she was trying to figure out how to become a professional singer, she stumbled into acting instead. “I was going to all of these art clubs, and they offered drama classes,” she recalls. “I decided to try those out, because I had always loved drama in school.”

Before she knew it, Atim was singing in musical-theater productions. “It all makes sense now that I’m here, but at the time I tried to resist,” she says. “I didn’t think being an artist was a career path for me. I always thought it was a hobby.”

That belief had a lot to do with Atim’s immigrant background: She traveled from Uganda to the United Kingdom with her mother when she was just an infant. “There’s this kind of leaning toward stability in immigrant families,” she says. “If you’re going to move somewhere to have a better life, you want to make sure you’re doing everything you can to see that through.”

Fearing that her daughter was devoting too much time to drama, Atim’s mother once forbade her child from starring in a school play. Atim decided to audition anyway—and was cast as Mary Magdalene in Jesus Christ Superstar. Later, she casually invited her mother to the show. After the performance, Atim recalls, instead of reprimanding her for her defiance, her mother said, “This is a big part of you, and you’re good at it. I’m glad that you did the show.” 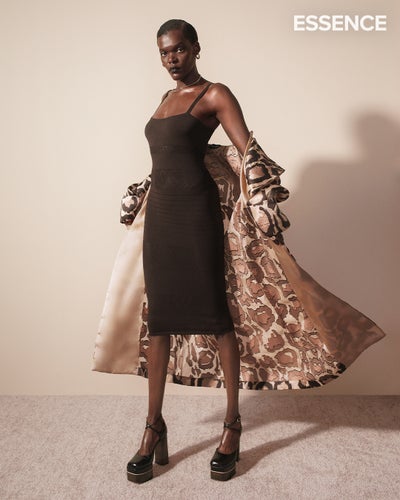 Those words would help Atim along in her acting journey. “The way she phrased it, she made me realize that there was this sort of gravitational pull toward creating,” she says. In 2013, Atim’s foray into professional acting began with her cowriting and performing in the musical The Lightning Child. Five years later, she would earn her first Laurence Olivier Award for Best Supporting Actress, for her part in the musical Girl from the North Country. She won her second earlier this year, for Lead Actress in the play Constellations. And in 2019, she premiered her own play, Anguis, at the Edinburgh Festival Fringe. Producing like this unlocked a whole new level of artistry for Atim.

“I didn’t think I had ideas in that way,” she explains. “I thought I was the person who comes in once the idea has already been formed, and I help the idea get executed. It was like this little hatch in my brain opened, and it was like, Oh my God, there are all these things in here, too.”

Through the writing process for Anguis, Atim discovered another important lesson about her voice. The 2019 play included a story line about a virus outbreak, which people around her didn’t totally understand. Only months later, the COVID-19 pandemic arrived—and the whole world knew what it meant to be affected by widespread disease. “There was something about that experience that made me go, I have things to say that may actually be relevant, even if at the time they don’t feel like they are,” Atim reflects.

When the real-world virus caused theater productions to close, Atim took her talents to the screen in Netflix’s Bruised, directed and produced by Halle Berry. The editor for Bruised took notice of Atim’s work and recommended her for another project led by Black women: Director Gina Prince-Bythewood’s The Woman King, starring Viola Davis and Lashana Lynch. The editor’s reference landed Atim the job.

Inspired by historical events in the Dahomey Kingdom during the 18th and 19th centuries, The Woman King demanded a new level of physicality from Atim. “We were training with a capital T,” she recalls. “We were learning new skills left, right and center. I don’t even know how I learned some of those things. It was just every possible opportunity, every day.”

Working on the film, which hit theaters on September 16, she also realized something about the elasticity of her limits. “I learned that I can push myself a lot further than I think I can,” Atim says. “And I also learned that I don’t always have to. It’s a real skill to gauge where your yes is and where’s your no. Where’s your hard stop? I think that’s something that you have to keep learning and recalibrating and experiencing through life.”

It’s part of an artistic journey that Atim now fully embraces as her destiny. “In the last couple of years of my career, I’ve been really lucky to work with lots of Black women, and that doesn’t happen often in the U.K.,” she says. “The enrichment I’ve felt from having those experiences is invaluable. I’m really excited for us to do that more. I hope it’s something that keeps on going.”