Australia’s energy generators are warning households and businesses face higher electricity bills within months after coal prices jumped due to the Russian invasion of Ukraine and floods in Australia.

Prime Minister Scott Morrison has promoted the government’s achievement of “delivering the affordable, reliable energy” and often points to an 8 per cent fall in electricity prices over the past two years.

However, the increase in coal prices as European countries scramble to reduce their reliance on energy sourced from Russia threatens to create new cost-of-living pressures to test the government and opposition ahead of the federal election. 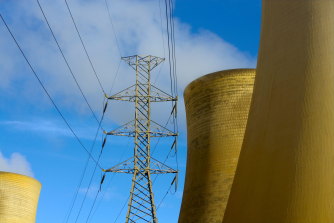 Power prices are expected to rise, and could do so by as early as the middle of the year. Credit:Nine.

The coal price is the major driver of wholesale electricity prices because coal-fired power stations supply more than two-thirds of the electricity in Australia’s grid.

Australian Energy Council chief executive Sarah McNamara, who represents major energy generation and electricity retailers such as AGL, EnergyAustralia and Origin Energy, said inflationary pressures would emerge in the second half of the year.

“The challenge for retailers is that the wholesale prices they pay are getting more expensive. When higher wholesale prices feed through, and by how much, depends on how retailers are hedged and the contracts they have in place,” McNamara said.

“Higher wholesale prices in specific regions of the National Electricity Market will impact the prices customers pay over time.”

Grattan Institute energy program director Tony Wood said government policy had not influenced the fall in power prices in recent years, which had been lowered by an influx of private investment in renewables and a drop in power demand during COVID. He said prices had been driven up more recently by domestic supply disruptions and the global market for fossil fuels.

“The trick for the government is if they’re going to take credit for the lower prices, then how can they avoid taking blame for the higher prices?” he said.

Wood also questioned Labor’s forecast for its plan to lower power prices by investing in transmission line upgrades to bring in more renewable energy. Labor has said its energy policy would save bill payers $378 on their electricity charges by 2030.

“They really should be more cautious in their forecasts because the federal government has very little control over so many of the variables that drive power bills,” Wood said.

Labor’s forecast did not factor in the war in Ukraine, floods on Australia’s east coast that disrupted coal supply lines, or the announcement of several early coal plant closures that will reduce energy supply to the grid.

The Australian Energy Regulator usually sets the maximum price retailers can charge households and small businesses on May 1. However, the federal government in April delayed that process, known as the “default market offer” until May 25, after the federal election, to give more time to get accurate data on recent price fluctuations.

The default market offer is the standing offer contracts from July 1 in NSW, South Australia and south-east Queensland.

The global price for thermal coal has shot up as countries scramble to ditch supplies from Russia. The wholesale price of energy comprises 30 to 40 per cent of an electricity customer’s bill.

Australia is also a major coal exporter and the price local buyers including coal plants pay is tied to the international benchmark.