People in Portland targeted city hall and a city commissioner’s home, vandalizing it on Thursday night.

About 60 people gathered at Arbor Lodge Park and marched toward the home of Portland City Commissioner Dan Ryan, the Multnomah County Sheriff’s Office (MCSO) said. At Ryan’s home, individuals broke a window, threw burning flares and paint-filled balloons at the house and broke potted plants, according to a press release from MCSO.

“That criminal activity prompted police to declare an unlawful assembly,” according to the sheriff’s office.

“Those responsible must be found, investigated and prosecuted to the fullest extent of the law,” Wheeler continued. “I condemn anyone who uses violence to attempt to silence the voices of others.” 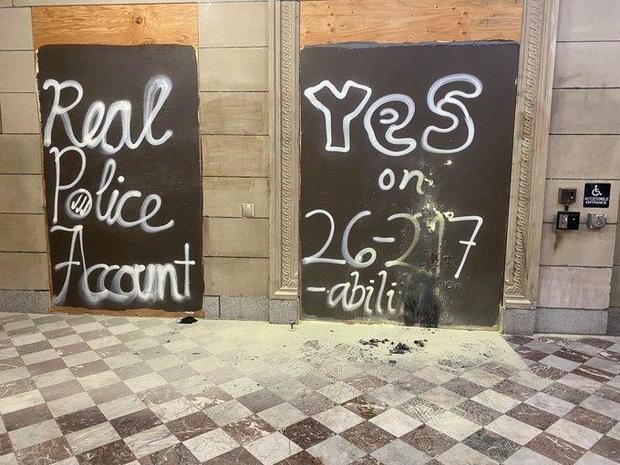 MCSO said police provided announcements to the crowd on Thursday night as they blocked streets, urging the group to refrain from engaging in criminal activity and use sidewalks.

The sheriff’s office said the warnings, broadcasted over a loudspeaker and on social media, were ignored. Police said they dispersed the crowd after individuals targeted Ryan’s home.

This is the fourth night in the past week Ryan has been targeted with vandalism and disruption to his house and neighborhood, MCSO said. CBS News has reached out to Ryan for comment.

Police arrested one person for trying to elude in a vehicle and reckless driving, after they tried to stop the vehicle, described as “related to the demonstration.” They made one other arrest, and another individual was criminally cited.

Portland Fire and Rescue also responded to a report of doors on fire at city hall at around 10:00 p.m. “It’s believed a burning object was placed or thrown at the door,” MCSO said, adding that a security guard at city hall extinguished the fire.

A fire investigator is actively working the case and the person who started the fire “remains outstanding,” MCSO said.

On Wednesday, more than a dozen people were arrested after two groups of protesters converged in downtown Portland, KOIN reports. One group went to Waterfront Park and the other blocked the Morrison Bridge, vandalizing small businesses and churches along West Burnside.

Unified Command of the Oregon State Police, the Multnomah County Sheriff’s Office and the Portland Police Bureau responded and the National Guard was activated around 7 p.m., when a riot was declared.

This was part of multiple demonstrations in the area, as the results of the 2020 presidential election remain in limbo, according to KOIN.