Christian Porter’s views on the need to overhaul defamation laws have changed since he went “inside the system” after launching a case against the ABC.

The federal Industry Minister, who was shifted out of the attorney-general portfolio after launching the defamation action, says he now has more nuanced views of the balance needed between public interest journalism and protecting people’s reputations. 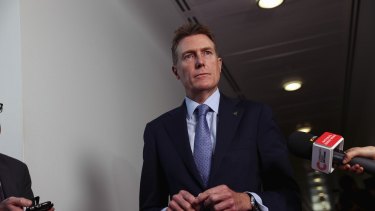 Industry Minister Christian Porter has spoken to reporters in Canberra for the first time since taking on his new portfolio.Credit:Dominic Lorrimer

Mr Porter is suing the ABC for defamation over its reporting of allegations he raped a woman when they were both teenagers. He strenuously denies the allegations.

He had previously backed a national shake-up of defamation laws. The proposals include a “serious harm threshold” for claims, a single publication rule to ensure the one-year window for claims starts on the date an article is published to the internet, limits to payouts and a new public interest defence.

NSW, Victoria and South Australia have agreed to make these changes to come into effect from July, with the other states and territories to follow suit as soon as possible.

“Once you have the experience inside the system, I think that you learn things that you don’t learn outside of the system,” he said on Wednesday.

Asked if he still believed defamation laws were unfair to traditional media compared with social media, he said his views on that aspect hadn’t changed.

Mr Porter evaded questions about whether he would run again in the next federal election and who was funding his legal fees.

He said he had received “lever arch folder after lever arch folder” with messages of support from his electorate, including offers of donations to help fund his legal costs.

“I went into this litigation, knowing that it’s going to put a massive personal financial drain on my resources, and I’m completely committed to that,” he told Sky News.

“I’m doing what I need to do to pay for litigation, and that’s going to be a massive drain on me.”

He later told reporters he would “prefer not to” have to resort to crowdfunding.

Pressed on whether he had an “understanding” with anyone to help pay his legal costs down the track, Mr Porter repeatedly said if there was anything that required him to make a public disclosure to Parliament, he would do so.

Asked directly whether he intended to run again in his outer-Perth seat of Pearce, Mr Porter would only say: “I’m just completely committed to my electorate”.

He was also “absolutely committed to the government” and said it had not occurred to him over the past few months that he didn’t want to be part of it.

Did that mean he would continue to be on the public stage after the next election? “Everyone likes elections,” he replied.