It is possible Scott Morrison’s subliminal pitch to fatigued voters – elect me and I will do nothing – will help him secure another term in office.

Searching for slogans to resolve issues like climate or the economy more broadly, the Prime Minister struck on the clunky: “Can-do capitalism”, not “don’t-do governments”. It sounded good on the day, except a few people thought they heard him say we need “do nothing” governments. 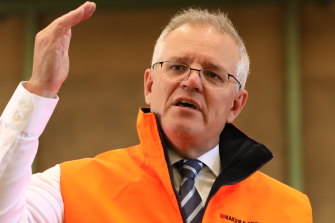 Regardless, his new narrative skates over the fact that the number of lives and livelihoods saved in Australia, for which he constantly claims credit, resulted from the actions and interventions of governments – including his – but mainly the states and territories. Details, details.

“We’ve got a bit used to governments telling us what to do over the last couple of years, I think we have to break that habit,” he said last week in Melbourne. His words may have resonated with angry, lockdown-weary Victorians.

People like them pose as much of a threat to the fate of the Morrison government as the progressive Liberals worried about climate change or integrity who threaten to desert him.

Morrison’s plan – now being undermined by the Deputy Prime Minister Barnaby Joyce pretending he is not part of the government – was to do enough on climate change to placate the progressives then quickly change tack to scoop up disaffected conservative voters who have drifted to Pauline Hanson or Clive Palmer.

If he can’t win their primary vote, his Trumpian pitch, legitimising and voicing their frustrations by saying “Australians have had a gutful of governments telling them what to do”, might help get their preferences.

Their preferences could be crucial for the coalition to hang onto seats like Leichhardt and Longman in Queensland, Banks, Lindsay and Reid in NSW, and even Higgins in Victoria where Labor’s recent research showed Palmer’s vote at 5 per cent. 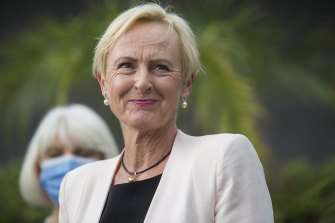 Morrison’s promise to remove government from their lives has a seductive ring for those people, however in trying to appeal to such disparate groups, he risks pleasing neither left nor right and losing votes from the middle.

On so many issues he’s like the circus performer trying to ride two horses at the same time. After finally dismounting he insists it went without a hitch, despite videos showing he had fallen off repeatedly. No matter. In keeping with his ever more preposterous photo frenzies, he does a tap dance in a red sequinned top hat and changes the story.

After Emmanuel Macron accused him personally of lying, Morrison vowed he wouldn’t cop people sledging Australia. Asked again the other day about Macron’s charge, he responded by accusing the opposition leader of siding with China.

“I see Anthony Albanese backed in the Chinese government and a number of others in having a crack at me as well,” he said. 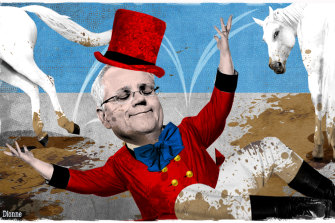 Morrison is like the circus performer trying to ride two horses at the same time.Credit:Dionne Gain

Uncertain how to respond to the blizzard of provocative, misleading statements, Albanese hopes the increasing brazenness will alienate sensible people in the middle.

Given voters think all politicians lie whenever their lips move, Albanese has to prove where or in what way Morrison’s perceived dishonesty or untrustworthiness makes him unreliable.

Like during the bushfires. Or vaccinations. Palmer’s advertising, coupled with threats by Hanson and a couple of his MPs to refuse to deal with legislation because of mandatory requirements by the states to get to the levels which Morrison so enthusiastically applaud, have prompted befuddled logic from the PM.

He claims credit for the high rates while absolving himself of responsibility for the measures which achieved it, including denying jobs or blocking access to venues for the unvaccinated. Every jurisdiction, almost every institution, except in the ACT where a compliant population is 100 per cent jabbed, has implemented some form of mandating to get rates high enough to end lockdowns, open borders and kick-start economies. It’s what governments are meant to do, not – as he says – not do.

“Well, again, again, I mean, we don’t have a mandatory vaccine policy as a federal government. That’s not something that we have done. We respect people’s choices,” Morrison told Seven’s Sunrise last week.

It is bizarre for the Prime Minister to disagree with mandating vaccinations, then try to reap the reward from the benefits it brings, then have to insist those in his orbit, including journalists covering his events, must carry proof of vaccination to access venues with restrictions.

Morrison has been flailing, hoping Labor can revive him by offering up a policy ripe for scaremongering.

It will come with Albanese’s release of his climate change policy in early December. Labor’s targets will be more ambitious than the government’s, although not so high they can’t be sold or justified with assurances of more jobs and higher investment.

Albanese knows there will be a fight no matter what, and in some ways relishes it, judging that if Morrison goes in too hard, he will cast doubt on his own commitment to tackle the problem, alienate the centre – mainly the liberal progressives shifting to independents – and take his negatives even higher.

Morrison agrees he is the underdog, saying he has been there before, implying he can come back to win. It is possible. In 2019, with only a narrow policy agenda of his own, he ran a disciplined campaign, followed the script and destroyed Bill Shorten.

Soon after, he wrecked his leadership by disappearing during the bushfires. COVID-19 rescued it. Now, it is being wrecked again.

He looks more loaded dog than underdog, jaw gripped around a stick of dynamite desperate to drop it at Albanese’s feet.

He needs to calm down. The government hopes to narrow the gap with Labor to 52-48 by year’s end, deliver a responsible budget next March or April then call the election. At every opportunity between now and then, he needs, with Josh Frydenberg, to talk sensibly about the economy and frame Labor credibly.