Rise of the post-lockdown affair: Cheaters rush to take advantage of eased restrictions with sign-ups to married dating site Illicit Encounters rising by 63% in May alone (and women are more keen than men)

The easing of lockdown restrictions means for many of us the chance to socialise, go to a nightclub and catch up with loved ones, but for some it’s apparently the perfect opportunity to spark up an affair.

A recent survey of 800 new members by dating site Illicit Encounters found that May saw a 36 per cent increase in overall sign-ups.

The largest group looking for secret hookups were women with a 63 per cent sign-up increase compared with 37 per cent for men.

Ordinarily, May is an incredibly slow month for affairs, and the number of new sign- ups has continued to rise at an exceptional rate. 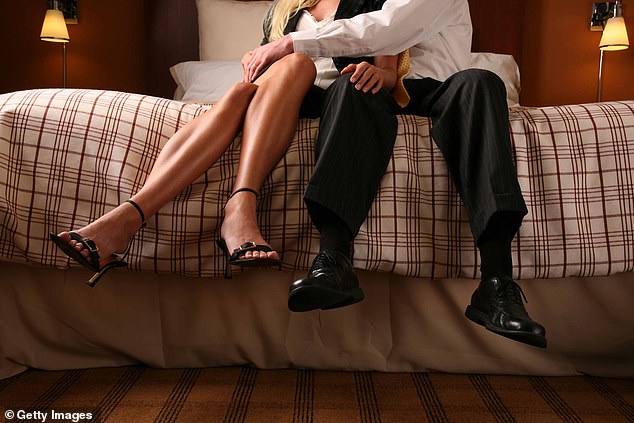 Jessica Leoni relationship expert for the site said: ‘People have been staring at the same four corners of their houses for far too long now and are quite frankly sick of seeing their spouse day in day out, no wonder there’s a huge demand for affairs.’

The increase isn’t showing any sign of slowing either.

A 72% increase in people looking to cheat is forecasted over the summer and Leoni think it’s inevitable.

Is YOUR partner likely to cheat?

Extramarital sex also takes into account cyber affairs, in which the parties do not have direct physical contact.

According to a study published in The Journal of Sex Research, women are more likely to cheat on their partners between six and 10 years of being together.

Men are likely to stick things out for longer before straying as they’re more likely to cheat after 11 years in a relationship.

‘Couples across the country are gasping for the novelty and excitement an illicit encounter can provide,’ she said.

‘Gosh, I can barely believe I’m saying this, but now that sex is legal with people outside of our own household again—we can expect affair cases to continue to rise.’

Yvonne, 50, from Glasgow, a user of the site, thinks that getting vaccinated will actually encourage people to get a little more frisky.

‘My husband and I have an arrangement where we allow each other to sleep with other people,’ she admitted.

‘It’s a turn on to talk about it after. Of course, we keep it under wraps from our friends, it might scare them off.

‘I’ve tried and failed to meet someone to have an affair with since I’ve been vaccinated, but recently I’ve been inundated with proposals. Looks like the tide is turning.’

Another member agrees that lockdown lifting has brought a certain excitement.

Lewis, 46, from London said: ‘I didn’t want to start meeting women when you could only go for a walk in the park.’

‘Besides, it’s much easier to come up with excuses to meet up now than it was before the rules were relaxed. There’s only so long you can “walk the dog” without raising suspicions.’