WAGES will take a hit from the coronavirus crisis with pay rises expected to be their lowest in a decade.

Companies are set to increase pay by just 1% on average in the year ahead, the smallest rise since 2010, experts say. 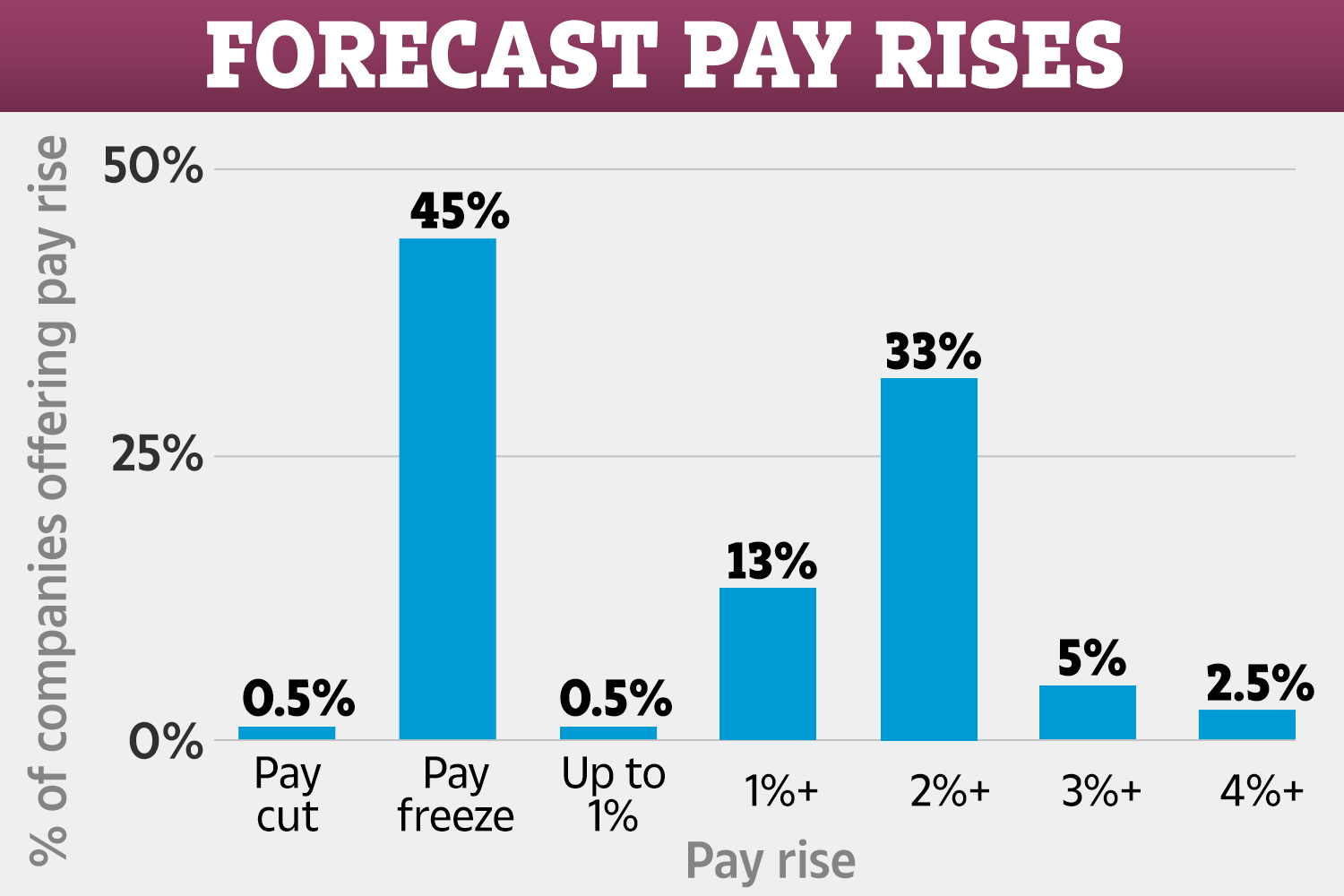 And a freeze on pay is the most likely outcome of pay reviews going into 2021, according to research from online HR platform XpertHR.

Nearly half of private companies said they do not expect to increase staff wages.

But pay rises are set to be slightly higher than average in the manufacturing and production industries, with wage growth in the coming year of 1.5%.

That compares to growth of 2.5% for the same time period the previous year, indicating that wage growth has already started to slow.

Shelia Attwood, pay and benefits editor at XpertHR said: “The devastating impact of the coronavirus pandemic on company finances has seen the value of pay rises fall to the floor over the past few months.

"Many employers are not optimistic that they will be in a position to award a pay rise in 2021, with a pay freeze easily the most expected outcome of any pay review next year.”

How to get a pay rise

It’s always worth negotiating when it comes to pay rises – here are experts’ top tips.

1. Do your research and show examples

First and foremost, it’s important you think through the reasons why you deserve a pay rise.

You'll need to be prepared, and should consider the ways you have gone above and beyond at work and use it as evidence.

It's also worth looking at job adverts for similar roles to your level and comparing what these pay.

Confidence is also key when it comes to asking for a pay rise.

You can avoid coming across nervous by speaking slowly, making eye contact and by avoiding nervous giggles.

Another way to increase your chances of getting a pay rise is by championing yourself and the work you do.

You could consider sharing updates on networks and websites such as LinkedIn and Twitter.

5. Be prepared for a negative answer

If you've prepared your case and the answer is still "no", don't take it personally.

Sometimes companies don't have the money to approve pay rises, especially with the pandemic, or it could seem unfair to other employees.

Check out these more top tips from recruitment experts as they reveal more how to get a pay rise.

The coronavirus crisis has lead to the loss of hundreds of thousands of jobs with retail and hospitalty among the hardest hit industries.

The pandemic has sparked the biggest surge in UK unemployment in more than a decade, the latest official figures reveal.

However, the number of employers hiring for staff increased in September offering a ray of hope for jobseekers.

But an increase in the number of people looking for work means employers are likely to pay less overall.

Companies have their pick of candidates and do not have to be as competitive on how much they pay to attract them.

And wages for Brits have failed to keep up with the rising cost of goods in recent years.

That means workers are less likely to feel better offbecause they have to spend more on outgoings even when they earn more.

Workers may be able to claim tax relief of up to £125 even if they've only worked from home once, says Martin Lewis.

Working couples should have at least £11,000 in savings to be able to survive six months of unemployment, experts have warned.

A fifth of bosses expect to axe 10% of workers by the end of the year – with legal and health workers among those most at risk.