Sydney’s Central Station was a sea of hawaiian shirts, bejewelled jumpsuits and grass skirts on Thursday morning as hundreds of Elvis Presley impersonators and fans waited to board the 8.33am train to Parkes.

The average commuter could be mistaken for thinking they were in a 50s-style dream, with a different Elvis in every direction, as enthusiasts of the rock and roll king psyched themselves up for the annual Parkes Elvis Festival. 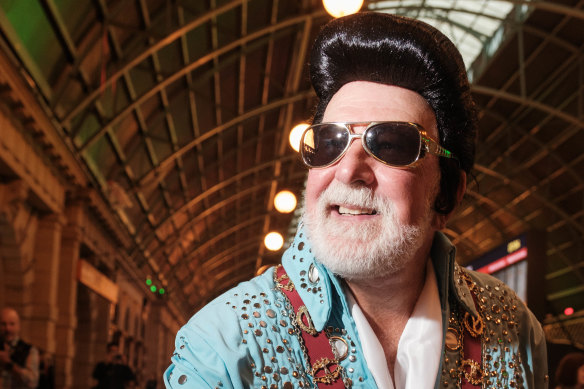 Parkes Shire Council Mayor Ken Keith is excited about the 30th anniversary of the festival.Credit:Oscar Colman

The internationally renowned festival is celebrating its 30th anniversary, and after a tumultuous few years of floods and the pandemic, Parkes Shire Council Mayor Ken Keith said it was a celebration for his community.

“It’s a huge event for Parkes, 25,000 people come to town, and it injects about $15 million into the regional economy, and after the flooding we have had in the central west, it’s really vital that we get people coming out and getting back into it,” Keith said.

With festival events like beginners’ line dancing and rock-a-hula dragon boating scattered across the town, there’s never a dull moment. The festival runs from January 4-8 to coincide with the King’s birthday, who would be turning 88-years-old if he was alive today.

“The morale is really important. People have had water through their homes, and they really are under a lot of mental stress at the moment…so the lift that Elvis will bring them is so important,” Keith said. 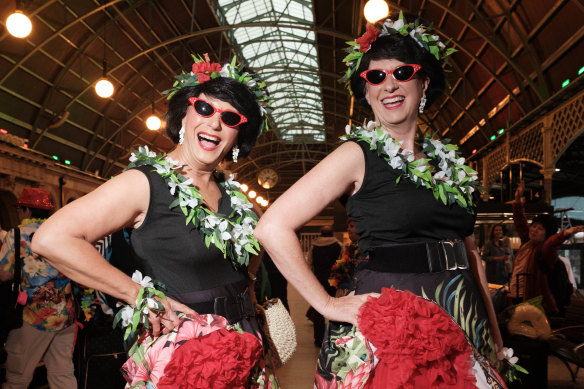 Best friends Gail Goulding and Deborah Petreski looked as if they had stepped off the set of Blue Hawaii, Elvis’ 1961 musical, which is also the theme of this year’s event.

“I was just watching the TV one day and I saw how much fun the Elvis train was and the festival, and I haven’t looked back since. I have been coming for 12 years, and it’s the best fun you’ll ever have in five days,” said Goulding.

“I never laugh so much in five days. Dressing up, we love it. You can be a character, just let your hair down. It’s for all ages, from the young to the elderly. It’s really great, very family oriented… Growing up, my mum always loved Elvis, so I think it just rubbed off on me.” 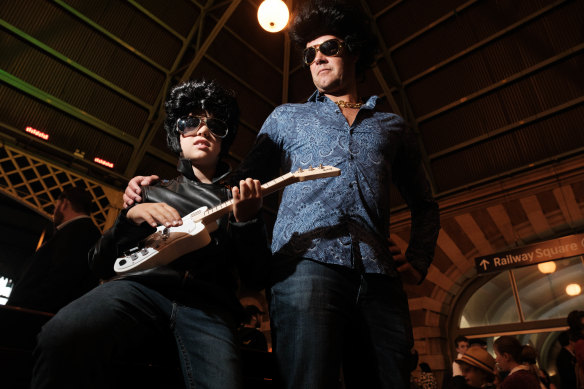 Eight-year-old William Mather was the youngest Elvis impersonator of the morning and is attending the festival with father Chris.Credit:Oscar Colman

Eight-year-old William Mather showed that the iconic jet-black hair and leather jacket wasn’t limited to your classic Elvis fans, proving that the king of rock is timeless, as he rocked out in the grand concourse ahead of his first time at the festival.

This year’s event will have feature artists from around the world, including Victor Trevino Jr. who is the current international champion for the Ultimate Elvis Tribute Artist Competition awarded by Elvis Presley Enterprises in August 2022.

As impersonators from across the country took to the stage to swing their hips and sing hits like Hound Dog, Trouble and Suspicious Minds, others boarded the train, eager to get the Elvis express out of the station and on its way.

When the train finally pulled out of Sydney to start its journey to Parkes, Elvises were packed into every carriage, with decorations and photos dangling from luggage carriers. Onlookers took photos and revelled in the moment, before turning to each other to say, Elvis has left the station.