The Coalition’s sole Aboriginal MP will urge her colleagues to prioritise education and tackling family violence in First Nations communities instead of pursuing constitutional change for an Indigenous Voice to Parliament.

Newly elected Country Liberal Party senator Jacinta Nampijinpa Price has told The Sydney Morning Herald and The Age that she will implore her Coalition colleagues to push for action on issues she says are more important to her constituents in the Northern Territory. 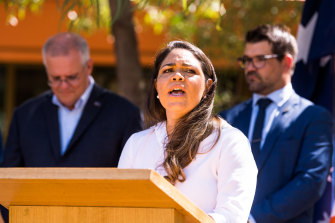 “We’ve got to understand what Labor proposes through this Voice process, and we’ve got to take a look at that before we take a clearer position on it, but I would certainly urge my colleagues to prioritise [more critical] issues,” she said.

“[The Voice] doesn't clearly outline how in fact we’re going to solve some of our really critical issues, issues that I’ve been very much campaigning on for many years around family and domestic violence, around child sexual abuse, around education."

As the only remaining First Nations MP in the Coalition after former Indigenous Australians minister Ken Wyatt lost his seat, the Warlpiri-Celtic woman could be an influential voice internally.

Labor is hoping to hold a referendum to enshrine an Indigenous Voice in the constitution during this term of Parliament. A Voice would operate as an advisory body to parliamentarians, politically empowering First Nations people and giving them a say in decisions that affect their lives.

Establishing a Voice will be a key goal of Indigenous Australians minister Linda Burney, and she has repeatedly called for the opposition to support the government over the last fortnight.

Liberal leader Peter Dutton said he would wait for details of the government’s proposal before taking a position, a softer response than his predecessor Scott Morrison, who categorically ruled out supporting a referendum.

Dutton’s comments were welcomed by some moderate members of the Liberal Party who believe a Voice should be enshrined in the constitution, including NSW senator Andrew Bragg.

“To achieve success at a referendum you do need bipartisan support and the opposition should be included in all the processes,” Bragg said.

“We should play a constructive role in developing the concepts.”

A united front will make the ‘yes’ campaign for a referendum on a Voice easier as there won’t be an official political campaign to oppose the change. Labor will also need the support of either the Coalition or the Greens and crossbench to get a referendum bill through the Senate, as they don’t have a majority in the upper house.

Greens First Nation spokeswoman Lidia Thorpe, a DjabWurrung Gunnai Gunditjmara woman, said her party would not seek to block action on a referendum.

“We will not stand in the way of progress for First Nations people, so if it’s about progressing our standing in this country then we will not oppose that,” she said.

She also said she looked forward to working with Linda Burney, whom she believes will work to achieve a cross-party consensus. However, Thorpe maintains she would prefer to see a truth-telling and treaty process begin before action on an Indigenous Voice.

“Truth telling is paramount to any healing and moving forward. When you go to a counsellor you’ve got to accept the truth of the situation, then you start having a conversation about how you heal,” she said.

While she said the Greens would not stand in the way of the progress, she said she would ultimately need to consult Elders and Indigenous community members she represents once she sees Labor's proposal in detail.

“That’s who I’ll be listening to – the people. Not myself, not my colleagues, I listen to the people. If they say ‘pass it’, I’ll pass it. If they say ‘don’t’, I won’t. I’m put there by the people, so I have to do the right thing by my people here,” she said.