It’s a 29-metre tunnel of glass and steel, filled with dry leaves from the forest floor and the national science agency believes its Pyrotron will hold the key to potentially outsmarting the rising threat of bushfires.

Australia is becoming drier and hotter, and severe and large scale fires like the Black Summer fires in 2019-20 are becoming more common, which is why CSIRO has invested $2.1 million in a new fire laboratory at its Black Mountain site in Canberra. 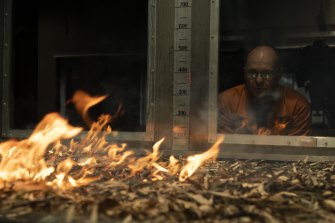 The aim is to help firefighters and landscape managers prepare for extreme events by improving their understanding of how bushfires start, how they behave, what conditions make them worse, and the best ways to respond.

CSIRO chief executive Larry Marshall said the agency studied all of Australia’s major fire events since the 1950s and “our people are trying to figure out how to fight that beast of bushfires”.

“The fires of 2019 reminded everyone of just how bad, how horrifying these fires are. When you talk to the people that have endured a bushfire, they really do feel like it’s a wild animal trying to break into their house…. you almost convinced yourself the fire has a mind of its own,” Dr Marshall said.

The centrepiece of the laboratory is a Pyrotron, which is a 29-metre-long combustion wind tunnel loaded with sensors and data analytics.

Scientists set fire to natural leaf litter similar to what’s found on the forest floor and monitor how the fire spreads under various conditions created by the 1-tonne wind turbine at the back of the tunnel.

CSIRO bushfire behaviour expert Andrew Sutherland said the frequency of severe bushfire days is expected to increase by 30 to 50 per cent by the end of this century. 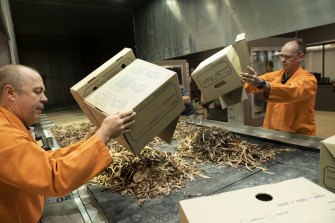 Scientists scatter leaf litter from the forest floor in the pyrotron, after it ahd been carefull dried to mimic the 40 degree heat of a severe bushfire weather. Credit:Rhett Wyman.

“It’s going to have a huge impact on more people than have traditionally been impacted by fires,” he said.

Due to the above-average rainfall over the past two years, Dr Sutherland had to use an industrial oven, set at 40 degrees, to dry out the leaves before he ran a test fire on Wednesday.

The laboratory also has a two-storey tall vertical wind tunnel to study how embers are caught in the fire front. Burning embers driven by high winds can travel up to 35 kilometres, Dr Stafford said. Spot fires that spark up ahead of the fire front are the main driver of fire spread, and the main cause of death and property loss.