Just after Scott Morrison became Prime Minister, he was asked if the Liberal Party’s rules should be changed to make it harder to remove prime ministers. He said that what needed to change was the culture. “Regulating for culture”, he said, was “never effective”.

Eight days later, Morrison called a snap meeting of his party. He had decided he wanted to change the rules after all. Asked why he had changed his mind, he said he had reflected deeply on the wishes of the Australian people. He might tell everybody that the Liberal Party was united – but by changing the rules, he was providing “a practical demonstration of it to the Australian people, that we mean it. That we’re fair dinkum about it. That’s why the party has made this change.” 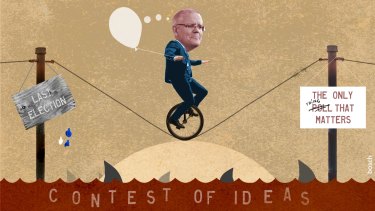 It was a good point, and the corollary was just as interesting. Morrison was implicitly conceding that without concrete action, Australians might conclude the words about cultural change were just words. What was absent might quickly become the most important thing.

In Australian politics, the past five weeks have been consumed with the issues of sexual violence and sexism. For many women, in particular, this has been exhausting. But unlike most issues that attract intense political focus, the issue itself is far from exhausted. There is a sense that we have barely begun to discuss this properly. That is because every topic leads quickly to another: there is no part of our society that is not shaped, in some way, by sexism.

And so, given this abundance of topics, it should probably surprise us just how much time in those weeks has been spent discussing Scott Morrison. Some of this was inevitable: a violent crime is alleged to have been committed at Parliament House; and a minister has been accused of a sexual sexual assault that he has strenuously denied.

What stands out is how much of the discussion has been about Morrison himself, including criticism of his character and his style of leadership. That was not inevitable, and it is worth asking why it has happened, and what he might do to address those concerns.

Here, it is worth trying to remember what has dominated political discussion in past years. A policy area would become a site of battle. This happened under recent Coalition governments, mostly on issues not of their choosing: marriage and a royal commission into banks. Before that, under Labor, there was carbon pricing and the mining tax. Under John Howard, you had WorkChoices, the republic, and the GST.

Not long after Morrison became Prime Minister, I was asked to write a long profile of him. The profile was, for a while, difficult to write, because it was hard to pin down much that was clear about him. Who was he? What did he believe? Eventually, I realised that what I had thought of as questions were in fact answers. There was nothing solid about Morrison to find. He had spent a career making sure of it.

His government’s approach to policy has been an extension of this principle. The policies it chooses to pursue are often small-fry. When ambitions start out large – regulating social media, or changing industrial relations laws – they fade quickly, as drastic compromises are reached in order to avoid larger battles.

And so, when massive cultural moments come along, both journalists and the public pounce on them as ways to understand the Prime Minister. He has given us little else to go on.

Usually, Morrison has a way of explaining his refusal to fight hard for anything. He is, he says, “practical”, or “pragmatic”. He was at it again last Thursday, explaining why he wouldn’t worry if his IR measures didn’t pass the Senate. “I am a practical person.”

Because the issue of sexism is so large, it is obvious that Morrison can’t fix it alone. He is also not in a position to offer a grand rhetorical moment of national catharsis; partly because of the Christian Porter situation, it would not be accepted as sincere. And while he is correct that sexism and sexual violence is a major problem in other parties, there is not much he can personally do about parties he does not lead.

Just like his last change to party rules, it would be a “practical demonstration” that the cultural change he said he believed in was actually taking place.

Why stop there? He should start an arms race on policies that support women. Work to reduce the gender pay gap, and the massive gap in women’s superannuation. Challenge the other parties to catch up. Politicians can’t snap their fingers and deliver instant cultural change, but they can implement policies that gradually force the culture to adapt.

What I learned in writing that profile was that, with Morrison, you must be attuned to absences as much as what is present. He has made plenty of mistakes in the past weeks; but what is just as telling are the things he hasn’t done. If he does not take the practical steps open to him, we should accept the lesson he taught us at the start of his term. Without concrete action, we are free to conclude that his words are only words, and that sexism is one more issue he just doesn’t care that much about.